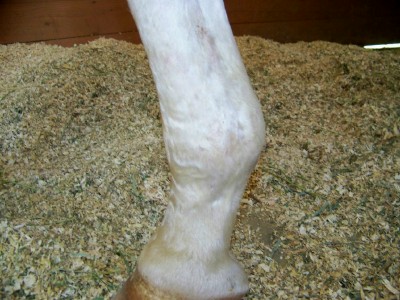 I know it doesn’t seem in any way special, but
what you’re looking at is a $600 fetlock.


Remember how I just wrote about colic? How the slightest
symptoms evoke a sense of dread within every horse lover? Well, I’d like to
nominate sudden, unexplained lameness as a close second to colic. Though it’s
not a potentially life-threatening situation like colic, discovering that your
dependable, four-wheel drive horse has suddenly gone lame can be more than a
little upsetting. That goes double for neurotic horsewomen like me, who fret
about everything to do with their horses’ health, from wonky ears to peculiar
skin bumps and watery eyes.

This latest saga began around the first of October. I was ill and hadn’t ridden for several days,
so I opted to longe Danny rather than ride him. The big ol’ lunk was frisky,
and even after I’d worked him on the line for a few minutes he still let out a
couple of leaps and whoop-tee-dos. When he landed after one spectacular burst
he was undeniably off.

Figuring that he’d merely tweaked something, I brought him,
iced his leg, then wrapped it and put him up. But guess what? He was still off
the next day. And the next. And the next.
When I jogged him on a circle to the
right he was lame on his left front. Theoretically that meant he was sore
someplace on the inside of his left foot (like his heel) or that perhaps he’d
strained one of the ligaments on the inside of his left front pastern.

And thus began a quest to find what exactly was wrong with
Danny. Fortunately I get along great with my vet, because I sure spent a lot of
time with her visiting my house.

Just in case you’re reading this, thinking, “I wonder if
Danny was sensitive to the hoof testers,” or, “I’ll bet he was even more lame
when the vet performed flexion tests on Danny’s joints,” the answer to both
ponderings are, “No.”

Also, there wasn’t any swelling, and he didn’t flinch, no
matter how much he got poked, prodded, squeezed or compressed.

So to narrow down where she needed to focus her attention, my
vet blocked Danny’s lower leg once, twice, three times. For those of you unfamiliar
with diagnostic nerve blocking, it’s a process where the vet temporarily numbs
an area of the horse’s leg—say the heel, for example—and if the horse is
suddenly sound then voila! You know precisely where to start fishing for the
answer.

Much to my relief, the blocking pretty much ruled out
navicular and ringbone. But when he was sound once his fetlock joint was
numbed, I became concerned: What if he had some bone chip floating around in there?
Gadzooks, my husband shudders at the cost of my horses’ annual vaccines. What’s
he going to do when he finds out Danny needs arthroscopic surgery?

Yet guess what? Danny’s x-rays were fine! There weren’t even
any signs of arthritis like you’d expect on a big, teenaged horse with more
than a few conformation flaws. So surgery was unnecessary.

So where did that leave me, besides with a dwindling bank
account?

Since Danny went sound once his fetlock was numbed, it was
apparent that his fetlock joint was bothering him, perhaps from when he screwed
around on the longe line. Or, due to age and normal wear and tear, the
cartilage in the joint could be thinning out, causing some soreness. My vet
advised me to continue resting him and also to have his fetlock joint injected
with cortisone and hyaluronic acid (HLA). That way, the inflammation is
abolished and the cartilage and joint fluid are supported. Plus Danny will join
Wally in getting a daily dose of an oral joint supplement.

Of course, wouldn’t you know it, the very same day she
arrived to do the procedure, Danny was prancing around his paddock perfectly
sound. But we went ahead and did the injection anyway. Then his leg was wrapped
and he was sequestered in the barn for several days.

In another week Danny will be ready to start back under
saddle. He seems ready to me right now. In fact, he keeps walking up to the
paddock gate each time I saddle up Wally with this look on his face like, “Uhm,
have you forgotten about me?”

Trust me, I am looking so forward to the day when I can
breathe a sigh of relief and climb on Danny’s back again. Then the nearly $600
that was spent on vet bills will have been worth it. Because having a
sweet-tempered, four-legged sofa to ride on the trails is priceless.