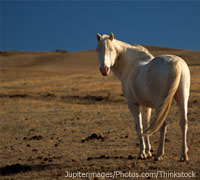 It’s no secret that I have a high level of frustration with
the entire American mustang issue. Or perhaps, more precisely, I have an issue
with the way the BLM has handled our country’s herds of feral horses. Now I’m
at the point where I’m not sure whether I should finally be rejoicing or simply
continue banging my head atop my desk.

You see, the BLM has finally decided it wants to get out of
the business of riding herd on our mustangs. With adoption rates pitifully low,
and federal budgets desperately in need of trimming, the BLM has decided to
hand over the mustangs’ oversight to a third party. Who that will be remains to
be seen. Meanwhile, a team of equine experts are convening to come up with
workable scenarios that will, once and for all, humanely and wisely manage the
mustangs. That report isn’t due until a year or so, but at least it’s a start.

What bothers me the most about all this?

Let’s start with the fact that only now is the BLM waking up
to the fact that perhaps better birth control practices need to be instituted
in the free-roaming herds. Like, duh.

But for years I’ve also cringed at how the BLM allows pretty
much anyone to adopt a mustang. The occasional stories you hear about mustangs
ending up at slaughterhouses aside, I find it disconcerting that $125 and a
corral gets you a wild horse. Trust me; I’ve attended numerous mustang
adoptions solely for the purposes of observation. To be certain, there are
always a handful of savvy horse folks who have decided that training a mustang
is a challenge and honor they want in their lives. Kudos to them. But sadly
there are far too many folks smitten with the romantic notion of taming the
Wild Thing through love and sugar cubes. Though they can barely sit a horse,
let alone teach one to longe, wear a saddle and yield to bit pressure, they
have it in their heads that they can gentle, break and ride a mustang. Of
course, that plan loses its appeal the first time the rodeo starts.

Yes, I know there are some DVDs available on how to gentle
and start a mustang but let’s be honest. If you have to rely on a DVD for
instruction on the basics of handling a wild horse, should you really be
getting a wild horse?

Too often the sad result is that, several years later, the
mustang is languishing in a pipe corral, cast off because it’s proven to be
more of a project than expected. In fact, not a month ago one of my
acquaintances in town called to find out where she could refer one of her barn
buddies who’d adopted a mustang mare several years ago. She explained, “It will
go along fine for a few months and then decide to dump someone.” The disgruntled
mare had already been given away several times, only to unload its new human,
thereby sending it back to whence it came. Now the original adopter just wanted
to be rid of the darned thing.

The one bright light in the mustang debacle, as far as I can
determine, is the Mustang Heritage Foundation. They present the various Mustang
Makeover events. The group also offers a trainer’s incentive program that funds
several months of professional handling and care to get a mustang gentled, the
idea being that the horse will then be more appealing to potential adopters.

But on the flip side are a lot of our country’s cattle
ranchers. While people like me are fretting about finding proper homes for mustangs,
the majority of cattle ranchers just want them to go someplace, anyplace,
that’s away from federal grazing lands. Their market beef are competing for
sparse forage with the mustangs, which they see as mere pests.

Ultimately, I am a realist. I accept that there are too many
mustangs, with the grand irony being that more mustangs are being held captive
in corrals and pastures by the BLM than running free in the wild. Plus, it’s
hard to justify paying nearly $40 million a year to manage mustangs. But this
manmade mess is not the animals’ fault. Better herd management practices
could’ve prevented a burgeoning population and conscientious culling of poorly
conformed individuals would’ve produced herds with more consistent size, eye
appeal and athletic potential.

Fortunately, I am also an optimist. I’m clinging to hope
that in another year (or so) we’ll have some reasonable recommendations from
this panel of experts and the BLM can pass the mustangs’ destiny to another
entity. Then maybe future generations can have the experience I once had, many
years ago with my father. We stood at the side of a dusty road in Nevada, just
outside a crumbling Wild West ghost town. We felt the earth tremble. Then, like
a mirage, a band of mustangs suddenly appeared and galloped past us. I remember
several sorrels, a bay, and a speckled gray with a silver mane and tail. Their
heads were high, their nostrils flared, as they charged through the sagebrush
like earthbound spirits. Somehow, such ethereal creatures must be preserved,
protected and treasured.