Named for the Marwar (now Jodhpur) region of northwest India, the Marwari horse as we know it today is the outcrossing of Akhal-Teke, Nisean (an extinct breed once native to Iran), and imported breeds from Arabia that came into India during wars and occupations from the northwest frontiers since the 4th century. Some breed historians consider the Marwari to be the archetype of the existing dilution of the 180 strains of indigenous Indian horses that were recorded during the 1820 census. 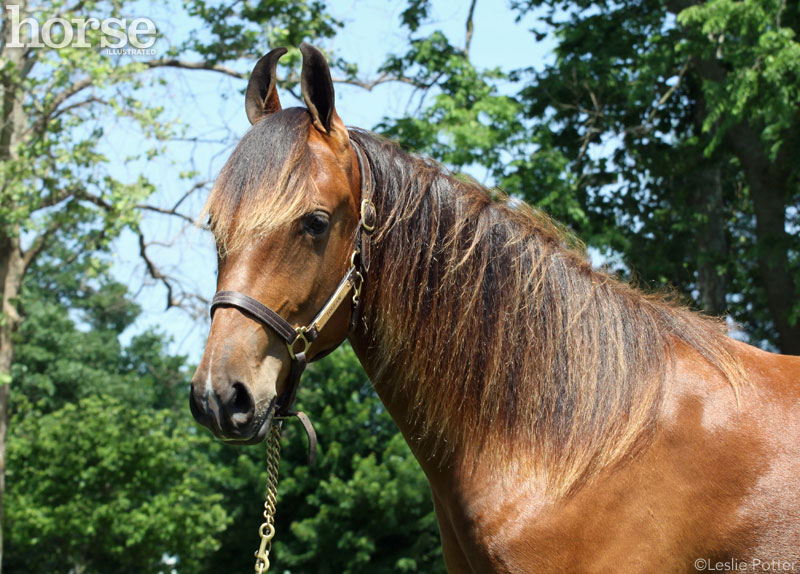 The Marwari horse’s inward-turning ears are one of its most unique and endearing features. As the tips of their ears touch, they form an arch or outline in the shape of a lyre—a small U-shaped harp. Originally a fierce cavalry horse used by the warrior castes and rulers, Marwari horses were bred and revered for their intelligence, fiery spirit and loyalty to their riders. Selective breeding continued to produce these fine-boned yet supremely hardy and courageous horses.

During the British rule of India in the 1930s, the British preferred Thoroughbreds and other European breeds over the native Marwari. As a result, breeding stock decreased substantially, both in numbers and quality. The breed continued losing ground over the decades that followed, eventually teetering on extinction.

A few prominent royal families in India maintained Marwari horses for personal use, but it was the efforts of common horsemen that prevented the regal breed from dying out completely.

Another lucky break for the Marwari occurred when British horsewoman Francesca Kelly traveled to India in 1995 for a horseback safari led by Bonnie Sing Dundlod. Her mount was a Marwari, and she fell in love with the horses. This chance meeting resulted in Kelly and Dundlod’s global campaign to save India’s equine treasure. They founded the Indigenous Horse Society of India, and created the first recorded stud book and the first government-recognized stud and breeding program, called Marwari Bloodlines. They continue to work with the government, breeders, and the public to promote and conserve the breed.

Today, in addition to about 2,000 registered Marwaris and approximately another 2,000 non-classified Marwari horses in India, there are small numbers in Sri Lanka, Oman, France, Spain, and the U.S.

With their slender necks, long backs, deep chests and sloping croups, as well as their self-confidence and intelligence, Marwaris are well suited to endurance riding and dressage, as well as any discipline that requires courage and independent thinking. Some Marwari horses have a natural gait that is similar to a pace, making them great general riding horses. They also do well in polo and light harness work.

Liked this article? Here’s more on the Marwari:
Video: Meet the Marwari

What’s the Difference Between a Paint Horse and a Pinto?