Growing up in Germany, Sandra Williamson (previously Clark) has always had a love for horses. She began riding when she was a little girl and was finally able to own her first horse at 13. Williamson excelled in English, dressage, hunting, and western riding. Eventually, life led her to Lyons, Ga., where she met her husband and they started their life on his family ranch. Little did Sandra Williamson know that she would one day be housing wild Mustangs.

Williamson missed horses and knew she wanted to start working with them again. One day she got a call from someone asking if she wanted a Mustang that was bucking off riders. Williamson had never worked with a Mustang before, but she enjoys a challenge, and he was right down the road. When she arrived, she walked into the pen with the Mustang and the other horses. She instantly knew—due to his demeanor—that she wanted to help him.

“The Mustang pinned his ears back, turned around, and walked the other way,” Williamson says. “I looked at the lady and I said, ‘Yep, I’ll take him.’ I could tell immediately that horse was mistreated, and he didn’t want anything to do with humans. I felt like he was so misunderstood, and I knew what he was saying to me right away.”

She loaded him up, and so began her journey with Mustangs.

She worked with him from the ground up, establishing trust while learning about Mustangs at the same time. She named him Maximus and credits him for teaching her so much and starting her journey with Mustangs.

Williamson says she found out pretty quick that her training techniques, which had worked so well with domestic horses, were not going to work for this Mustang. So she adapted. Maximus has become one of her best horses and still lives out on the ranch.

“Mustangs teach you; you don’t really teach them,” she says. “There were a few times when I felt that I was in over my head, but I never gave up. I kept learning and trying to bond with them, and finally I would gain their trust. Now they run up to me in the pasture without thinking twice.”

Williamson started looking into Mustangs more and learned about the Bureau of Land Management and how many Mustangs are in holding facilities looking for homes. She knew she wanted to help them get out of holding, which led her to the Mustang Heritage Foundation’s Trainer Incentive Program (TIP).

Through the TIP program, trainers are paid $1,000 once a Mustang or burro has been gentled and adopted into a good home. Gentled, according to TIP requirements, means picking up all four feet upon request, loading in and out of a trailer and letting someone lead them around.

Once Williamson was approved to be a TIP trainer and became a storefront, which allows her to take in more Mustangs at a time, some people from Germany got in contact with her that were looking for a Mustang for the Mustang Makeover Germany. Williamson felt honored and excited to be able to help them; however, she needed to do some research on how it was going to work. The Mustangs for the event still needed to be wild, but gentle enough to travel to Germany.

“I know it sounds crazy, but it is possible,” she says. “You can’t touch any of the horses I send over. I have a chute, and we halter them and vet them. We are cautious not to tame them, so all we do is focus on getting them to trust us just enough to follow us wherever we go without touching them.”

In 2017, Williamson got ready to send her first load of Mustangs to Germany, but before the Mustangs can go anywhere or do anything, they must go into isolation for 31 days. The isolation area has to be inspected by the United States Department of Agriculture (USDA), and a veterinarian inspects the horses.

During the 31 days, blood is drawn for Coggins tests and to check for vesicular stomatitis. On the last day of isolation, the USDA comes back to inspect the horses again and make sure they’re healthy for the trip. That same day, they load up the Mustangs and take them to the Atlanta International Airport to start their journey to Germany.

The horses are loaded into jet boxes on a cargo airplane with their own hay and water for a nine-hour flight.

“We also have someone who has been around the Mustangs fly with them, so there is a familiar face,” says Williamson. “Once they arrive in Germany, a veterinarian inspects them again, gives them a microchip, and they rest. The next day, they meet their new owners.”

Williamson’s first load of Mustangs went to Germany without any problems, but it wouldn’t be her last. Soon after that, other people from Germany started reaching out to her asking for a Mustang of their own.

Williamson would pick out the one they wanted and gentle them more than the regular TIP program required. Mustangs she has worked with now have homes in Finland, Norway, Switzerland, Germany and Austria.

“Every two hours I check on the Mustangs on the flight, and they’re usually very calm,” says Vander Horn. “Some are a little withdrawn, but once they see me and recognize me from the ranch, they become more relaxed.

“Once we get to Germany, the unloading runs smoothly, even though they are very unfamiliar with where they are,” she adds. “They get unloaded onto concrete and are inside a building, but they trust us and follow us into their stalls. It really is incredible.”

Sandra Williamson keeps up with most of the Mustangs that travel to Europe. Some of them are used for trail rides, while others compete at events, but one Mustang stands out to her. She recalls this Mustang being particularly headstrong; he ended up going to a trainer who offers lessons for handicapped children.

Not long after the Mustang was at the trainer’s facility, he walked up to a little girl in a wheelchair who was born without feeling in her legs and sniffed her. The trainer said it was almost like he could sense that something was different about the little girl. After months of training for Germany Mustang Makeover, the horse and the little girl bonded. She would lead him from her wheelchair and even get on his back to ride.

“This is why we do what we do,” Williamson says. “I just feel blessed with the results of the Mustangs I’ve worked with. The outcome makes it worth it to work harder to get Mustangs out of holding and into homes.”

This article Mustangs going global thanks to Sandra Williamson appeared in the March 2020 issue of Horse Illustrated magazine. Click here to subscribe! 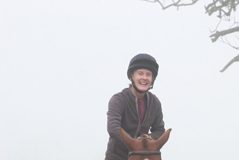 Riding in the UK