Showmanship at halter is a class that showcases the harmony between a horse and his exhibitor, and the showmanship pivot is a key point in your performance. It’s a maneuver that requires precision and cooperation as you guide the horse to plant his hind foot and rotate his body 360 degrees. Learn how to master this move with AQHA Professional Horseman, judge, and all-around trainer Bruce Walquist’s advice.

To win the class, Walquist says you need both horse and rider in sync and performing each maneuver correctly—with a dash of style.
“The goal is for a horse and exhibitor to be in concert with one another,” says Walquist. “Both horse and handler should be on the same page—thinking the same way, reading one another’s minds so that they can stay connected.”
A way to set yourself apart in showmanship is to achieve balance between you and your horse, and also in your horse’s body.
“A lot of people think it’s just about the exhibitor, but it’s about [your] ability to show the horse to his best ability,” says Walquist. “By being balanced with both horse and [handler]  locked in with each other—one not too far ahead of the other or dragging behind—then you can perform all the maneuvers to a higher degree of difficulty.”

Why the Showmanship Pivot is Tricky

It’s challenging to do the pivot correctly, says Walquist, and in AQHA competition, the pivot carries a high penalty when it’s done incorrectly.
“The pivot can make or break you in a lot of ways,” says Walquist. “If the horse’s right hind foot comes off the ground, it’s a 3-point penalty. If he picks his foot up and moves it to a new location, that becomes a 5-point penalty. If he does it more than once in a turn, it’s another 5.”
Showmanship is scored on a scale of 0 to 100, and the score starts at 70. Each of the seven to 10 maneuvers receives a score ranging from -3 to +3 in half-point increments.

In a correct pivot, your horse is balanced with his legs square, staying in a straight line from poll to tail throughout the turn. Avoid allowing your horse to overbend toward or away from you. The right hind should be planted, and the left hind should step forward and around as needed to stay square. The front left leg should cross over the right, not go behind.
“The more fluidly both horse and exhibitor move, and with speed, the higher the degree of difficulty,” says Walquist.

Walquist suggests practicing in the middle of your arena on good footing. Outfit your horse in a well-fitting halter and a lead shank with a chain. He says when actually practicing, his clients loop the chain through the halter’s nearside lower ring, under the chin, through the right side ring and up to the upper ring to snap back on the chain. (When leading to the ring and not actively practicing, the snap is clipped to the middle ring under the chin.)
He recommends practicing showmanship at least two or three times a week to keep the two of you working in unison. But don’t drill endlessly.
“If we practice for 30 minutes, we must have really had a problem,” says Walquist. “It’s usually about 15 minutes.”
To practice the pivot, stand near the horse’s eye—or at his nose, depending on your horse—with your shoulders square and parallel to the horse’s body. You will be walking a circle and looking in the direction of the turn as your horse pivots to the right.
You’ll start the maneuver with a clucking voice command, and in response, you want your horse to start to move laterally with his shoulder. If he doesn’t, you can follow up with a couple of different responses to teach him to cross over the left front leg while his body stays straight as he pivots.
“You can use your hand held up high to encourage him to pick the left shoulder up and step over,” says Walquist. “You can use a crop to tickle the shoulder and encourage movement.”
Throughout the turn—and your pattern—you want your horse to respond to the position of your right hand on the lead.
“We’ll teach them to follow our hand up or down with their head and neck,” says Walquist. “It’s important that the horse hooks up with your hand for every command.”
Start by working on a quarter turn at a time, and gradually work up to a 360-degree turn or more.

If your horse starts stepping too quickly, Walquist recommends stopping and standing the horse up straight. His shoulder position controls his feet. Practice slowing down and increasing speed as you turn to keep your horse in tune with your cues.
“Pay attention to the horse’s balance—don’t let his neck bow out,” says Walquist. “Keep him square.”
Your shoulders and body dictate the circumference of the circle you’re on. If your left shoulder is too far back—with you facing the outside of the turn—it’ll be harder to stay on the correct circumference.
If you’re turning and looking at the pivot foot, your shoulder position will cause your horse to back up. Just glance at your horse’s feet while keeping your body square to your horse.
You may need to walk your horse out of the pivot to encourage him to move forward if he starts sucking back or crossing his front left leg behind the right. Stop, then ask for the turn again, and keep working at it until your horse is turning correctly. It’s very important that your horse steps forward, not back, during this lateral turn.
Special thanks to Bruce’s daughter, Whitney Vicars, for demonstrating these moves with Southwestern Gunman.
This article about how to nail showmanship pivots appeared in the June 2021 issue of Horse Illustrated magazine. Click here to subscribe! 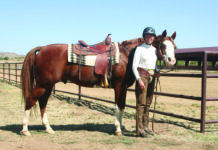 The Latest Looks for Western All-Around