Since the horse industry became aware of how common equine gastric ulcers are decades ago, prevention focused on a need for horses to graze intermittently to keep their intestinal tract filled with forage, just as they would in the wild. The commonplace feeding of two large meals a day with long periods of fasting in between was thought to contribute to the development of gastric ulcers, especially in the face of other stressors like training, competition, and herd dynamics.

While current thinking has changed somewhat, fasting a horse for more than six hours is still recognized as a risk for development of ESGD. Studies demonstrate that horses with at least some amount of turnout or the ability to eat hay at will are less likely to develop ESGD.

That said, the effect of pasture turnout or free-choice hay might be overstated. In a notable study, nearly 71 percent of broodmares at pasture had equine gastric ulcer syndrome (EGUS), suggesting that there is more to this story, and other risk factors must also be minimized in order to control the development of gastric ulcers. Ben Sykes, an Australian equine veterinarian at the forefront of EGUS research states, “ESGD is unusual in well-managed performance horses on appropriate diets despite limited turnout.”

Horses need at least 1 percent of their body weight per day in the form of forage (hay or pasture) to decrease stomach acidity (this equates to a minimum of 10 pounds dry weight for a 1,000-pound horse). Weigh the amount of hay a horse will actually consume, as some is generally trampled and wasted or discarded with stall cleaning. 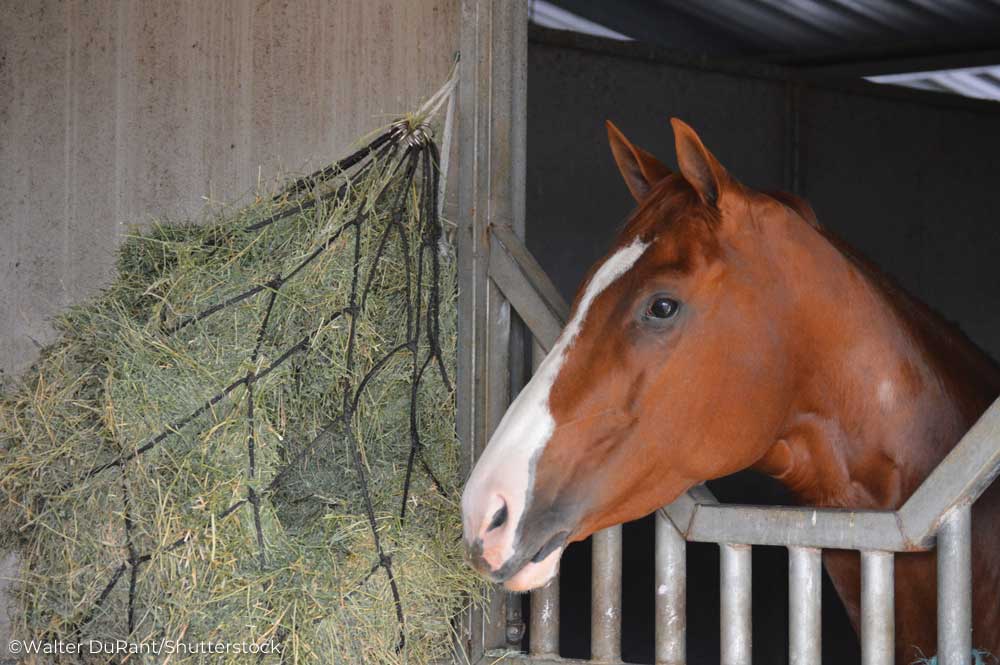 If hay is not available free-choice, ideally a horse is fed four to six hay meals per day. If your schedule doesn’t allow that, use a slow feeder system or small-hole hay net to extend your horse’s eating time. Alfalfa hay, even in small amounts, helps to increase stomach pH, and this protective effect may last four to five hours.

Another tip for dietary management for equine ulcers are grain products. Grain products (corn, oats, barley, sweet feed) should be fed in minimal amounts, as their digestion produces large quantities of volatile fatty acids (VFAs). Exposure for three to four hours to VFAs decreases stomach tissue resistance to acid. Food usually moves quickly from the stomach into the small intestine, but there are instances where it can take up to four and a half hours to empty one pound of grain from the stomach, with digestive acid present during that time.

Recommendations call for limiting grain meals to less than 5 pounds per feeding, although it’s better still to feed no more than 1 to 2 pounds for a 1,000-pound horse, and to separate grain meals by at least six hours.

Another important point for EGUS management is that horses with limited or no access to water are more than two and a half times as likely to develop EGUS. Fresh, clean water should be available at all times.