My husband tells me I can turn any conversation to the subject of horses. Last year, as I was working on a children’s book for National Geographic Kids about wolves (it comes out this week!), I took this as a personal challenge: how would I fit horses into a book about saving wolves? As it turns out, I didn’t have to work too hard to figure out a connection between wolves and horses.

Like when Yellowstone wolf biologist Doug Smith told me about how he had to pinch himself his first day on the job in 1994. In fact, he was going to get to ride a horse for a good part of his summer work days, scouting wolf den. Every year Doug gets assigned a horse (Yellowstone owns 120 horses plus mules). For most of the recent past, he’s been assigned a horse named Joker, a Quarter Horse/Percheron gelding that Doug trained from the time Joker was a sturdy colt. Smith says his best days at work have been on a horse. Sometimes he’s out trekking on horseback for a week in the wilderness with four pack horses. 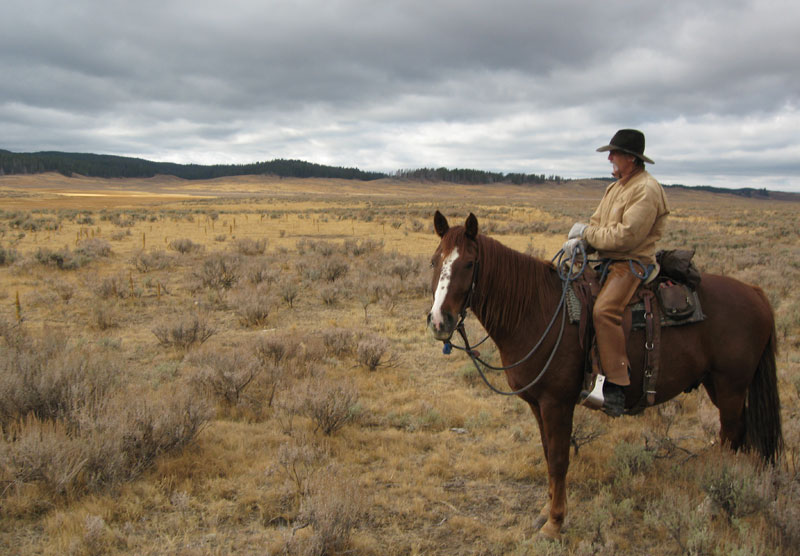 Doug Smith and Joker look out over the Hayden Valley, which he told me is one of the best places to see wildlife, like wolves, elk, grizzly bears and bison (especially from the back of a horse), in Yellowstone. Photo courtesy of Doug Smith

His equine partners, he says, have better instincts than ATVs or snowmobiles. Horses learn the scent of a dead wolf, which is often what Smith is looking for. He’s in charge of the Yellowstone Wolf Project. If a wolf dies inside the national park, it’s his job to figure out the who, where and how the death occurred like a national park-scale game of Clue (Wolf #305 / on the Blacktail Plateau / with the candlestick).

“At first they get freaked out,” he told me in an interview last spring, about when a horse helps find the remains of a wolf. “But after that, they help me find it. I’m sure of it.”

In the book I also included a story about a Montana cowboy who’s helping to save wolves on horseback. Jim Powers, his wife Marilyn and 16 Quarter horses camp out every summer on thousands of acres in predator country in Western Montana, watching over cattle. As range riders, Jim and Marilyn keep the cattle safe from wolves. This keeps the wolves from killing cows, which can be a death sentence for a wolf. It’s nice to know we’ve got a little horse power going in wolf conservation.

How much does a Clydesdale eat?