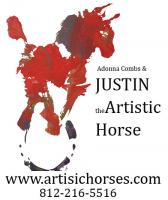 Eight years ago, Adonna Combs bought a gorgeous two-year old Friesian gelding as a dressage prospect. But at a schooling show early in his career, Justin made it clear that dressage was not what he had in mind for a career. “At one show we were doing a 20-meter circle and he just left the ring,” Adonna says. “He didn’t want to do that anymore.”

Trail riding is a lot more fun, anyway, the pair decided. And then there’s the painting thing. One day in the ring, Adonna – she’s an artist – noticed how 16.3 hand Justin liked to pick up her dressage whip and “draw” in the sand of the arena. “I watched him make patterns in the sand and a light bulb went off,” she says. “I thought maybe he’s trying to tell me he wants to paint.”

And boy does Justin like to paint. Adonna (she lives in Columbus, Indiana) told me how the first time she swapped the dressage whip for a paint brush laden with paint, Justin quickly understood that the brush was supposed to touch the paper. “It was amazing,” she says. “The more I’ve worked with him, the better he’s gotten. He drew lots of horse shapes, sometimes I don’t see them until somebody says there’s a giant horse in that painting. Some are very apparent and some are hidden.”

Justin does back and forth strokes, circles and zig zags in washable, non-toxic paint. If he drops the brush, he’ll wiggle his lips to blend the colors together. Sometimes he ends up covered in paint, himself. He paints Adonna’s dog and the barn, too. “We’re very messy,” she says. “We’re not the ‘stay in the lines’ kind of people.” 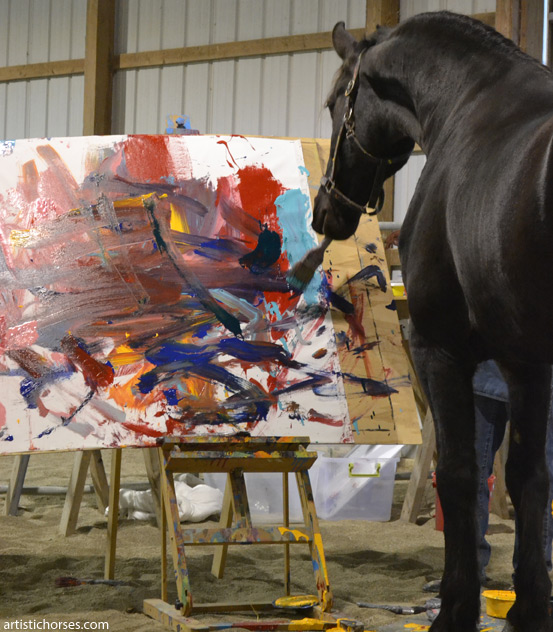 Justin has a creative mind – like how he lets all the other horses out and has what his owner calls “a big party in the barn aisle, emptying the buckets and messing up the blankets.” 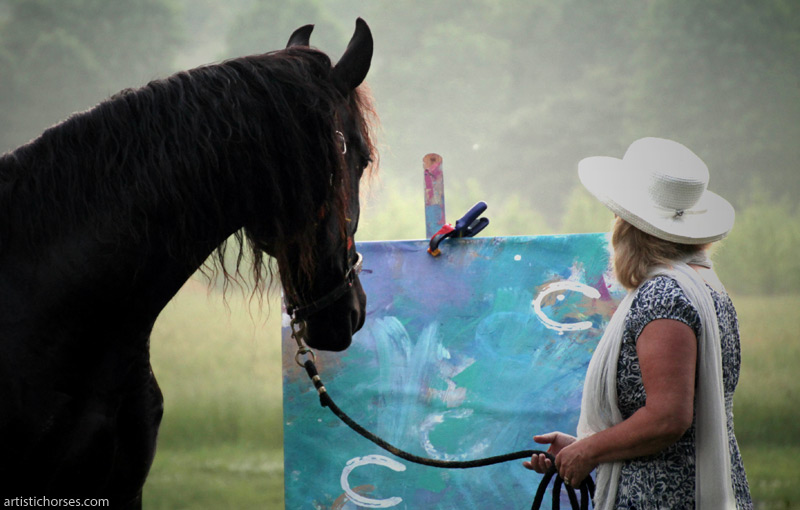 Justin has exhibits at local galleries and events. “He always surprises me how professional he is,” his owner says. 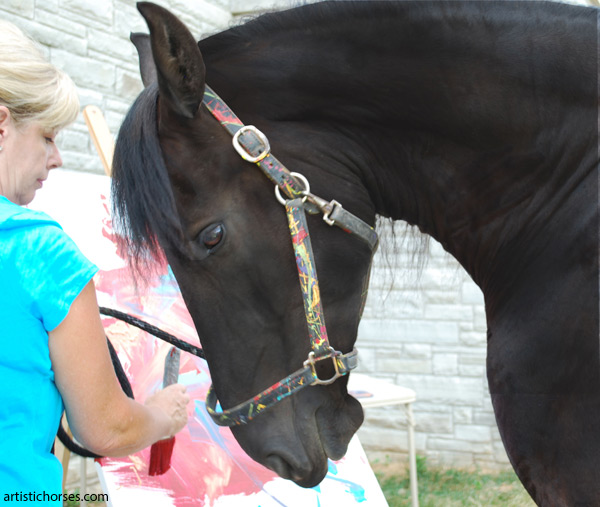 I first interviewed Adonna and Justin for a story I wrote about Justin that appears in a book that I contributed stories to for National Geographic Kids (125 True Stories of Amazing Pets).