I don’t know what scared me more, the creepy guy in the woods my friend and I encountered yesterday on horseback, or the look on the park police ranger’s face when he realized we knew where the man was hiding. We encountered the officer just as accidentally as we’d encountered the creepy guy. One, it turns out, was looking for the other in the wooded national park land around the C&O Canal in Potomac, Maryland where we were all doing our own thing. But was the creepy guy just creepy, or dangerous? Others had alerted the police about his presence. We just happened to have a trail of bread crumbs ready to throw down for the officer who was stumped about where to find the guy. 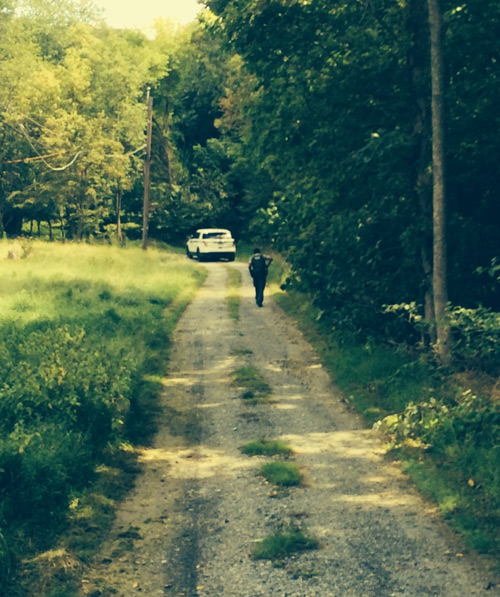 Park police officer on his way into the woods. At the time, we wondered if he would come out alive. Have we watched one too many murder mysteries?
Everything about the creepy guy (from his cargo-shorts over pajama pants look to his Silence-of-the-Lambs murderer voice to the fact that his car trunk was open in the woods) screamed “serial killer” to me.

We trotted back up the road to the hidden trail head to show the park police officer where he could enter the woods. Up the leafy trail he would find the guy who had driven his car up the too-narrow trail and parked his Honda, sprawling weirdness out all over the pristine woods. Taff and Ronin rose to the occasion with a mighty clip clop. My mind raced. Was the creepy guy setting out his duct tape and garbage bags preparing to bury a body? Plotting something diabolical? Or was he just so creepy that the hair on my arms stood on end just for fun?

What made him so creepy? It was something about the way he ever-so-slightly blocked our path. Or the strange questions he asked about the horses nearby in the pasture. Or the tense body language he displayed when he tried to touch the horses. Or the poster recently thumb-tacked to the bulletin board in the barn about two missing children. It all gave me the chills. A friend of mine calls this one’s “spider sense.”

Later, when we returned to the trail on our way back to the barn, we found the officer’s vehicle still idling. We wondered and worried and waited. The horses were agitated and nipping at each other, but we didn’t want to interrupt anything in there. By the time the brave officer hiked back out of the woods, we learned that he had spent more than an hour talking to the guy and searching his car. There was no arrest. I think the officer simply told the guy he couldn’t park his car on a trail in the woods in the middle of a national park. There was a rumbling that he was homeless. Perhaps on parole. Perhaps drinking.

Aside from illegally parking, perhaps all the guy was guilty of was acting suspicious. We passed by his car as we rode up the trail again, noticing the flattened cardboard boxes, the wooden platform in the car where the back seat might have been, and the silver UGGS sitting on the hood. Had we just ruined his plans to sleep there that night? In the end, it was a case of live and let live. But one thing’s for sure: I’ll be looking over my shoulder the next time I ride through those woods. 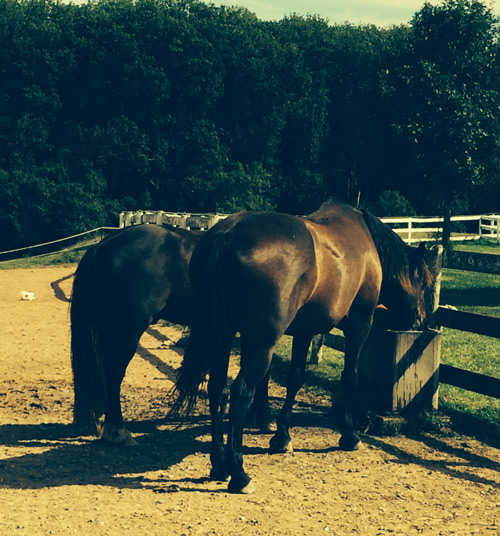 Ronin and Taff enjoy a long drink after our trail ride with a twist.