Home Equestrian Lifestyle Over the Fence: What Happened to the Stolen Horse?

Last Friday night I was glued to the national news watching the awful footage from California about the suspect attempting to flee the police on a very stoic stolen horse. 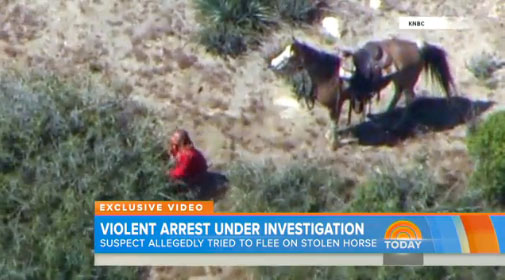 The violence and chaos was hard to watch. But all weekend long and into Monday, I wondered what happened to that horse with the bald face. I couldn’t shake it. Curiosity fueled me into investigative reporting – not my usual thing.

After about 10 emails and as many phone calls to various police departments and animal control departments in California, on Tuesday afternoon, I connected with Cindy Bachman, a sympathetic public information officer for the San Bernardino County Sheriff’s Department. She also seemed to think the horse’s story was important, too. Here’s what she told me:

About the condition of the horse…
The horse suffered numerous injuries to his legs, she said, because he was ridden hard and fast over about five miles. The desert terrain was difficult and steep, rocky and jagged. He had cuts and abrasions to his legs.

About getting the horse to safety…
The folks on scene from the San Bernardino County Sheriff’s Department began to put together a plan to get the horse out of the remote area. Their focus was to get him to safety without further injury, pain or stress. But the plan hadn’t emerged yet when (much to their relief) the owner showed up and took possession of the horse. It’s possible that the owner found them because he could see the helicopter activity (there were at least four helicopters including the sheriff’s department, NBC and the California Highway Patrol). Cindy didn’t have specifics about the owner, the horse or the extent of the horse’s injuries, but she knows the horse was back in the care of its owner and got medical care.

About how the theft occurred…
Cindy says, before the episode started, the owner was riding the horse near the hot springs in the Deep Creek area. The suspect took the horse “as a means of transportation.”

About the area…
It all happened in an unincorporated area of the high desert in San Bernardino County, called Victor Valley, which is in the area of Apple Valley, California.