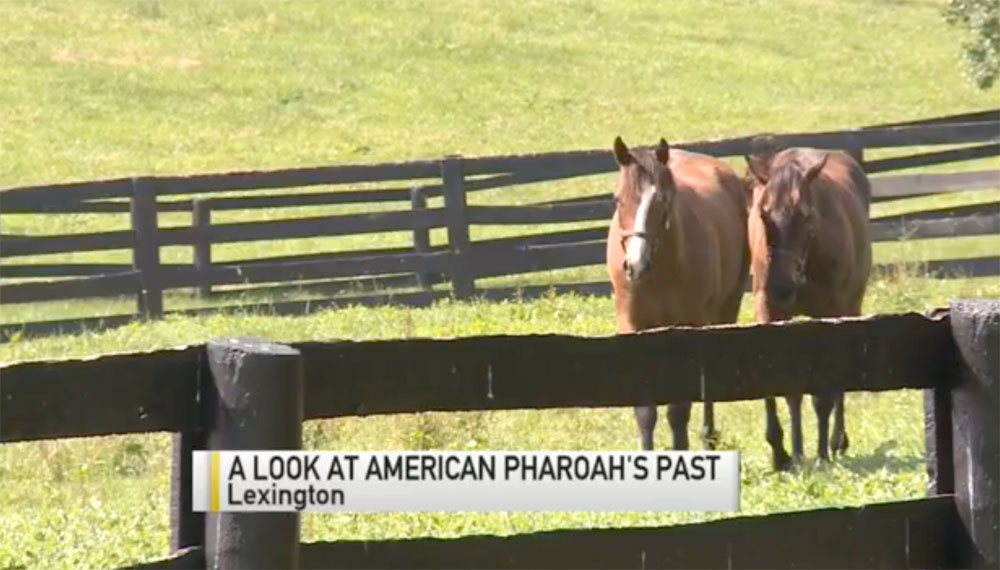 You probably already know that all Thoroughbred race horses in the northern hemisphere share a birthday on January 1 (It has to do with wanting a uniform way to classify race horses by age. Here’s an explanation if you want to know more.) The amazing American Pharoah, though, was actually born on February 2, 2012 at Stockplace Farm in Lexington, Kentucky. Today he turns four. Here’s a little something I wrote about the day he was born.

It’s almost midnight when the plain-brown foal opens his eyes for the first time. He blinks as they adjust to the dim light of the barn. His little nostrils flare with his first breath as he takes in his mother’s scent. No one knows it yet, but there is a secret in this spacious stall. One day, this tiny colt will become a horse racing hero. His dam, a noble and sweet-natured mare named LittlePrincessEmma, nickers at her newborn. Then she curls her neck around and touches her nose to his.

It’s Groundhog Day, 2012. Earlier that morning, five hundred miles north, a plump woodchuck named Phil had poked his head out of a Pennsylvania hole. He saw his shadow and predicted six more weeks of winter.

In Kentucky, however, the bleak forecast matters little to the foal with a whisper of a white star between his eyes. The little Thoroughbred’s concerns are much more immediate: untangling his spindly legs, wobbling until he can stand up, and filling his belly with sweet, warm milk. He is delighted to discover that his mother’s body produces the stuff in great quantity. As he guzzles and gulps, it drip, drip, drips off the little whiskers on his soft, brown chin.

Each day, the leggy colt follows his mother into a sweeping green pasture. Mares with early-born foals graze inside the safety of a sturdy black fence. The babies, shy at first, gambol, race and rear. They press their small hooves into the dirt, push off into the air, then dash and cavort like feathers in the wind. When they tire, the foals drop to the ground, their velvet heads flattening the soft grass.

In March, by the time the colt is a month old, he weighs more than 100 pounds. His mother dotes on him, sharing her breakfast and nibbling his back with her teeth, scrubbing his fur until she finds his favorite scratchy spots. He stretches out his neck, points his nose in the air and enjoys the grooming so much that his lips quiver.

The colt’s caregivers check on him every day. Month after month, they jot notes on a clipboard about the colt’s kind nature and his fast-growing limbs. The son of a champion racehorse named Pioneer of the Nile, this colt was born to run.