Here’s a happy story, in contrast to most of the sad news making headlines this week. In this story, Pure Thoughts Horse Rescue serves as the critical intersection for two horses that needed each other badly.

Meet Mocha. Late this spring, a Quarter Horse mare named Mocha lost her first foal, just two days after it was born. The mare was devastated. Flipping out. Needed to be drugged to calm down. And she was still producing a lot of milk. Her owners, they were also devastated, called Pure Thoughts for help. Did they have a newborn foal that needed a mother? Brad Gaver, co-founder of the rescue said they would – it’s nurse mare season, after all, but the babies wouldn’t arrive for another two weeks. But Brad was willing to try if it meant a chance for one of the orphan foals to find a real-live adoptive equine mother. But with two weeks to wait, he wasn’t sure if the mare would still be lactating or accept a foal that wasn’t her own. Nothing like that had ever happened. What were the chances? 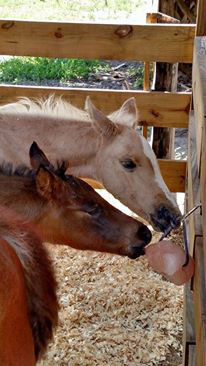 Meet Uma. Late this spring, a farmer in Kentucky offloaded the foals his mares had given birth to. This was so the lactating mares could be leased out to nurse the foals of valuable racing or show mares, so they could get back to work. The lactating mares’ babies are mere byproduct in this situation. But at least the Kentucky farmer got the babies to Kentucky Humane Society Equine CARE, instead of serving them up a worse fate. Plain little orphan Uma was thin, 2-days old and hungry. Motherless. She was delivered to Pure Thoughts in late May. 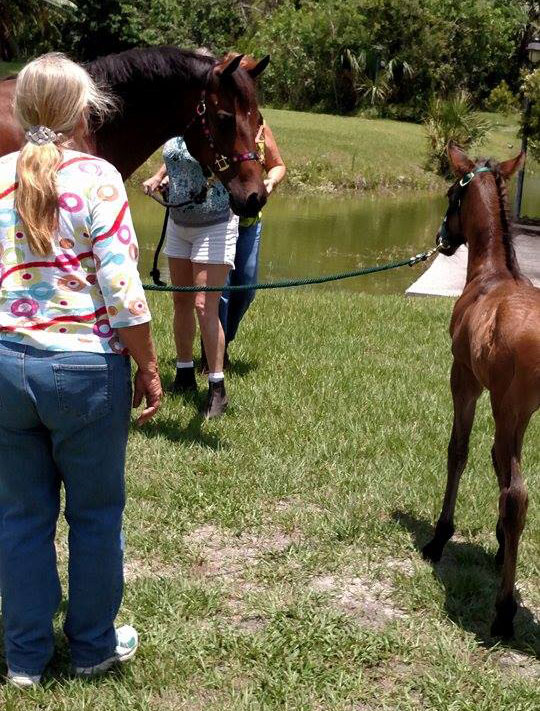 The day the babies arrived at the farm, Mocha’s family was there before the trailer with the babies drove down the long, leafy driveway into the refuge at Pure Thoughts. Uma was the smallest, the neediest and the youngest of the babies that stepped off the trailer that day, worried and not sure where they were. She also looked like Mocha’s foal. A squad of people worked on making it a successful meeting between the three-week old baby and the mare. The magic didn’t happen right away. But finally one person massaged Mocha’s udder until milk squirted out in Uma’s direction. Uma didn’t have to be asked twice. She remembered that sweet smell. She latched on and guzzled the mare’s dreamy milk until the good stuff bubbled down over her little brown chin. The mare relaxed. The milk flowed. 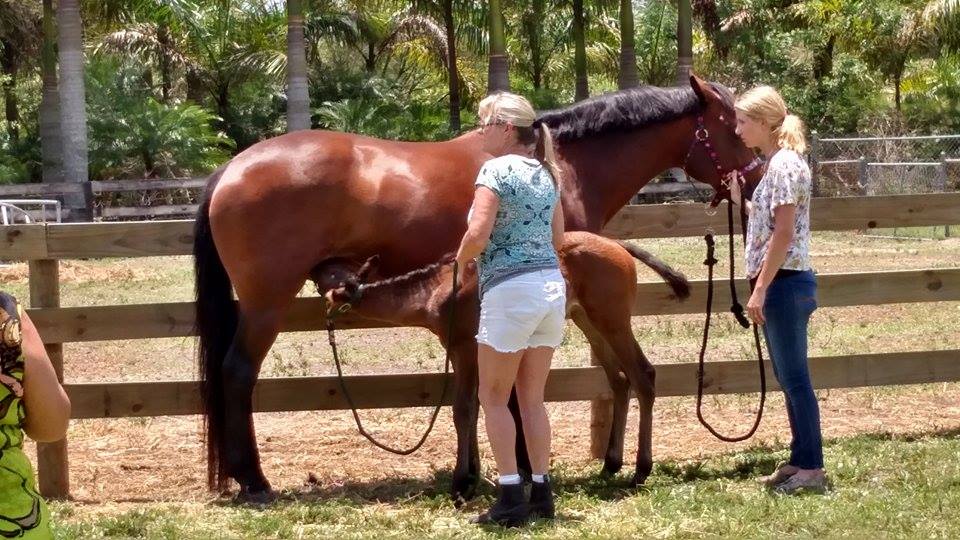 Back at their home in Stuart, Florida, Mocha and Uma are completely bonded and living happy ever after. Click here to learn more and/or help Pure Thoughts save more nurse mare foals. You can also check out updates about their foals here.

Video: Taking a Green Horse on the Trail with Jonathan Field