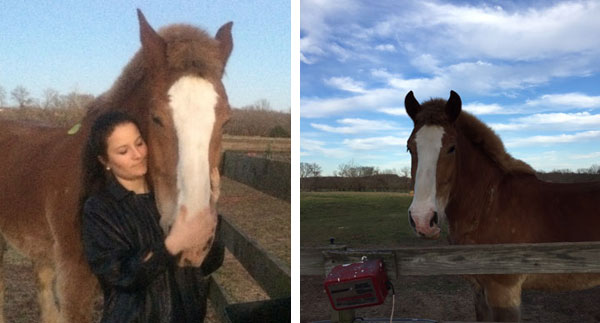 If you haven’t read part one of the story yet, click here to start from the beginning.

The morning after high-school senior Cassidy Paradis committed to buying the rescue horse she would later name “Flickers,” the 18-year old made her mother coffee and oatmeal and told her that they needed to be in Pennsylvania by 3 p.m. to pick up a horse.

A horse lover and an emergency room doctor, it takes a lot to faze Cassidy’s mom, Tracey. It didn’t take long before she was on board with the plan. Mom and daughter drove to the farm, hooked up the borrowed gooseneck and headed north from Maryland.

Cassidy knew it would be hard going into the kill pen, where only one of every ten horses makes it out alive. She says about 300 horses pass through the place every month. When they got there, Cassidy could see the empty trailers waiting to be packed full of live horse flesh for the long, hellish journey to slaughter. At least the trailers would be minus one lucky horse that day.

She found the horse she’d committed to buying that dismal February afternoon, lying in a pool of manure in a stall too small for him to even turn around. When the gentle giant stood up, she couldn’t quite believe his size at 17.2 hands high and likely close to 2,000 pounds. She’d never handled a horse that size, but he was more than ready to join up. She was comforted by the kind look in his eye.

The horse stomped up and onto the trailer without hesitating. For Cassidy, it was hard to turn away and leave the rest of the horses. But in order to save this one, they had to get him back to Maryland. He arrived after dark and spent the night in a small moonlit pasture with clean water to drink and a roomy shed. 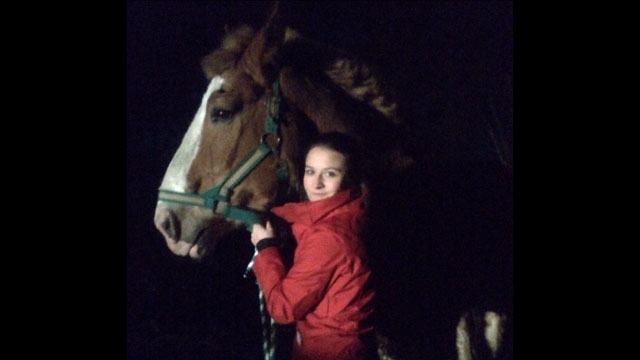 Over the next few days, Cassidy spent hours slowly cleaning off dried manure that might have ripped his skin if she worked too fast. He seemed to enjoy the work of her quiet hands.

Under the careful care of Monocacy Equine and a talented and creative farrier named Mike O’Brien, the horse started on the road to recovery. Cassidy focused on gentle attention and on loosening the filth from his coat. Overall the horse seemed in ok shape, except for his back left foot, which was pretty much a disaster.

In that department, farrier Mike says the horse had a severe case of “seedy toe,” also known as white line disease. It was the worst case Mike had seen in working on the feet of 10,000 horses over the last ten years. “It looked like it was allowed to progress over several years until he was so lame he was useless and was sent for slaughter,” Mike says. The horse could hardly put weight on the 10-inch wide foot.

It was so badly infected that Mike could open and close the foot like a cow’s foot. In order to save the horse’s life, Mike knew the work had to be “done quick and done radically.” And quiet as the horse was, he was understandably sensitive about his painful foot. He’d slam the foot down without warning and with lethal force. With assistance from the vet and sedation, the team managed to dig out most of the dead tissue including a fair amount of the coffin bone. Sterile maggots helped consume the necrotic (dead) tissue. 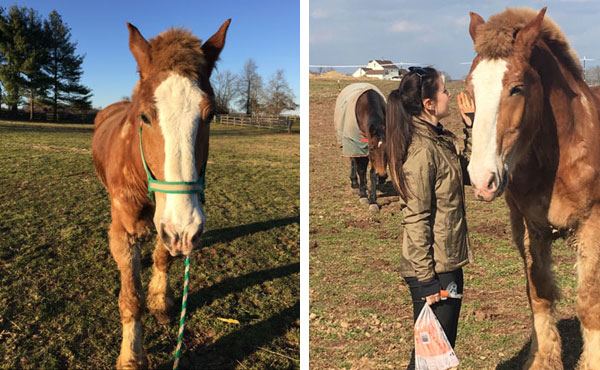 Mike stabilized the foot with a special bar shoe with a large plate on the bottom to keep the foot together and clean. It went all the way up to the coronary band. “The hole was so big you could hide a lemon in it.”

To solve the additional problem of needing to change the dressing every day despite the danger of picking up the foot (and sedating him daily not being practical) Mike and vet Rich Forfa came up with the idea for the little door to cover the gap. Mike (who used to be a music teacher) bolted a piano hinge to a piece of heavy gauge cooper, noting its antibacterial properties. Then he bolted the little door to the foot, using a latch with a hook and lever to close it. Then it’s all covered with duct tape. This way, to get to the massive wound, caregivers could just remove the tape, open the door and change the betadine-soaked gauze every day. 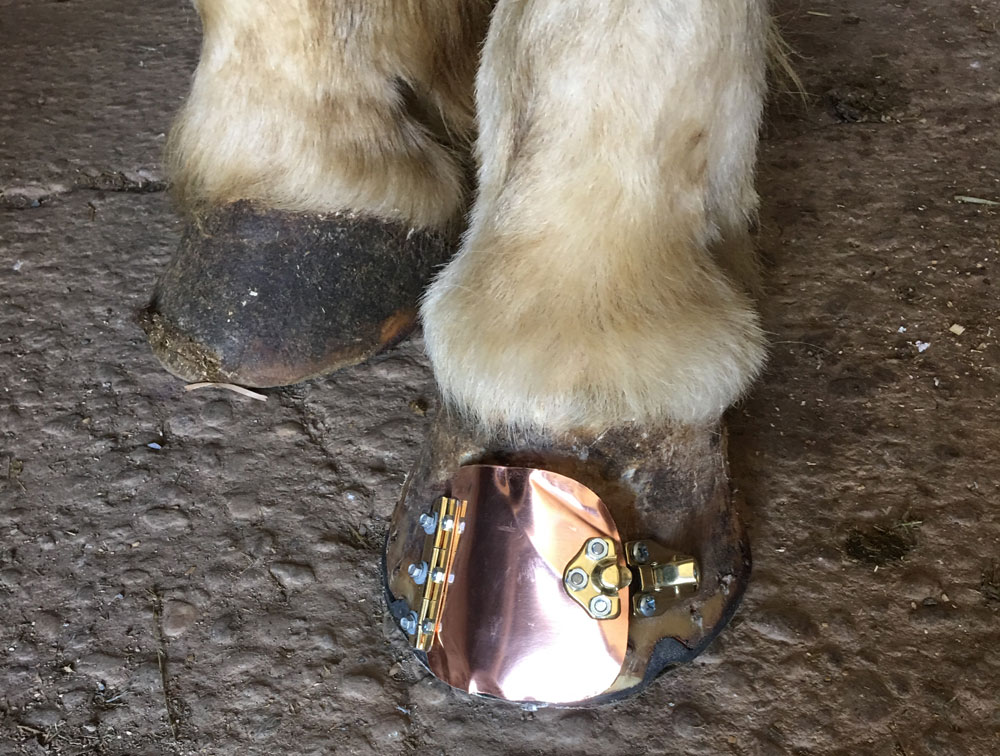 That was March. Now, the hoof just needs time to grow out. It might take a year for the horse to be sound again. We’ll get an update on how Flickers is doing these days, in part three of this story, next week. 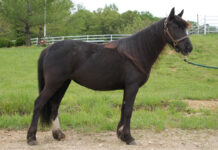 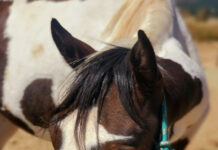