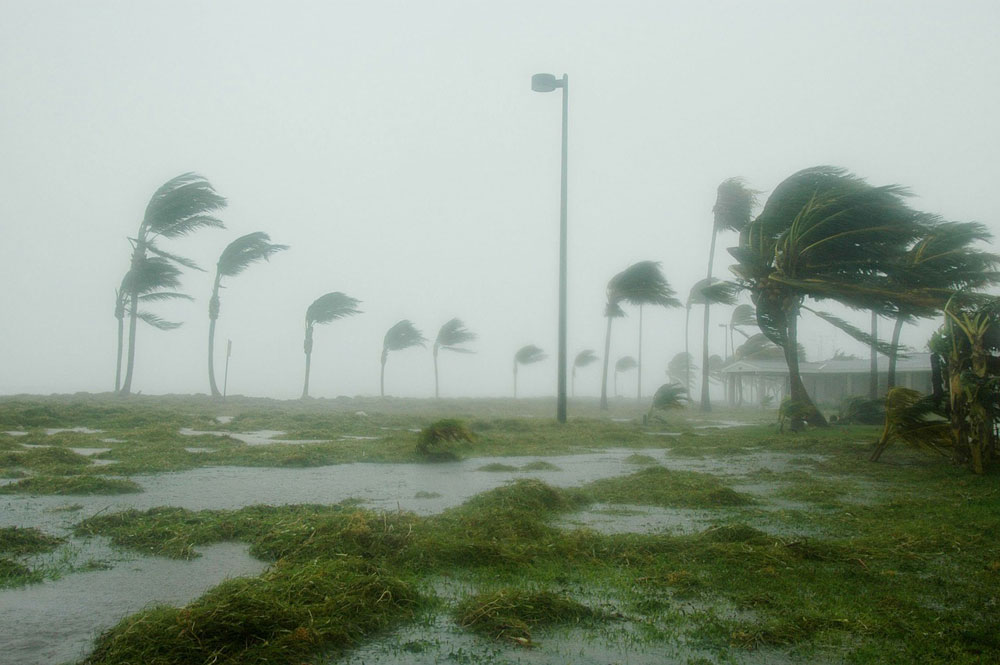 I went to bed last night thinking of my friends at Pure Thoughts Horse Rescue in Loxahatchee, Florida, knowing they were about to be hit by Hurricane Matthew, along with the 55 horses, three cows, two llamas, four goats, one pig, chickens, a feral cat and six dogs in their care.

At the time the storm landed overnight, Matthew was still a category 4 hurricane, and already causing widespread evacuations, winds up to 120 mph, storm surges and torrential rain in the area. Pure Thoughts was right in the mix of thrashing winds and flooding rains last night. I talked to them this afternoon… here’s a timeline of their last few days that illustrates the challenges of getting through a hurricane with horses.

Pure Thoughts Founders Brad Gaver and Jennifer Swanson have lived in Florida long enough to know to take the threat of a hurricane seriously.

7:30 a.m. – They hear the hurricane is likely to hit before the week’s end. They reschedule events at their therapy center for Wednesday through Friday. They order extra feed and hay and send a volunteer to get gas and diesel for the generator.

9:30 a.m. – They hold the scheduled class that ends after lunchtime.

3 p.m. – Round up volunteers and get busy picking up jumps in the ring and get big stuff moved into the old dairy barn. They make the decision to stay put through the hurricane, hope the barns hold and don’t worry about the hurricane shutters on the house. They make sure they have enough water for people.

6 p.m. – A neighbor stops by to help them set up the generator.

Major effort to rid the farm of junk, have the stuff hauled away and then secure all the garbage cans. Otherwise, it’s a normal day for the horses, but not the people. All day long, they focus on cleaning. There’s a four-person crew and another eight or so volunteers and students picking up stuff all over the farm. They store water, pull in water troughs from the paddocks, give each horse extra water buckets in the stall. Brad writes a big list on the inside of the barn wall. What else can be put away or come down? He screws the doors of the tack room shut. He gives people jobs to do.

Thursday, October 6: It’s About to Hit the Fan

7 a.m. – The horses get a bit of turnout before the storm hits. It’s rainy and windy but otherwise ok. Stalls are cleaned, people pick up all the little stuff around the farm and putting it away – mounting blocks, chairs, garbage cans, fire wood – basically anything that might blow away: barrels, pitchforks, rain sheets, saddle pads. Brad gathers plywood to build a shelter around the goat pen to create a wind break. He puts the chickens into dog crates and moves them into the dairy barn.

5 p.m. – It’s raining harder. The wind picks up. The horses are inside for dinner. They get a half ration of grain — It may be a stressful night for them, so the idea is to cut down on the chance of colic. They get extra hay cubes and beat pulp to increase their water intake. News reporters and local governments are evacuating coastal areas nearby, saying “this storm will kill you.”

6 p.m. – The storm beats down. Squalls whip through. One of the farm’s healthy avocado trees crashes on a fence.

8 p.m. – Brad gives the horses a split ration of hay and fills up water buckets. The horses with stalls that face the outdoors get their hay in the left corner so they’re not getting rained on. The horses seem relaxed. All their preparation so far is paying off. But will the roof hold in the wind?

12 a.m. – Brad hasn’t gone to bed, but checks on the horses again. They get more hay and water. Six volunteers stay for the night and do all the hay and water checks all night with Brad. They feel safer at the farm. Brad knows he has to be calm and relaxed to be a strong leader through the storm for more than just the horses.

2 a.m. – The wind howls and the rain pounds as the storm peaks and they lose power. They’re still awake, but now they won’t have air conditioning or refrigeration or the ability to charge their phones. The generator doesn’t work right. They will have to rely on stored water until who knows when.

4 a.m. – it’s not safe to go outside. The humans fall asleep for a few hours.

7 a.m. – It’s cloudy and breezy but for the most part the storm is over when everyone wakes up. The power is still off. It’s almost nice out. They check the horses, goats, llamas, cows and chickens and everybody is ok.

3 p.m. – The power goes out again, but spirits remain high. The six volunteers stay all day to help get the horse’s back to normal. The neighbor’s on his way back over to figure out the generator. Even the Cooper’s Hawk who lives wild on the farm made it through the storm. He likely rode it out in the safety of the tree house. The horses will stay in for the day because the paddocks are full of debris. But it will get cleaned up. “None of the animals got hurt, that’s why we do all this,” Brad says. “And it was great how everybody got together to pull us through. Tomorrow we’ll get back to normal.”

Click here to make a donation to Pure Thoughts.