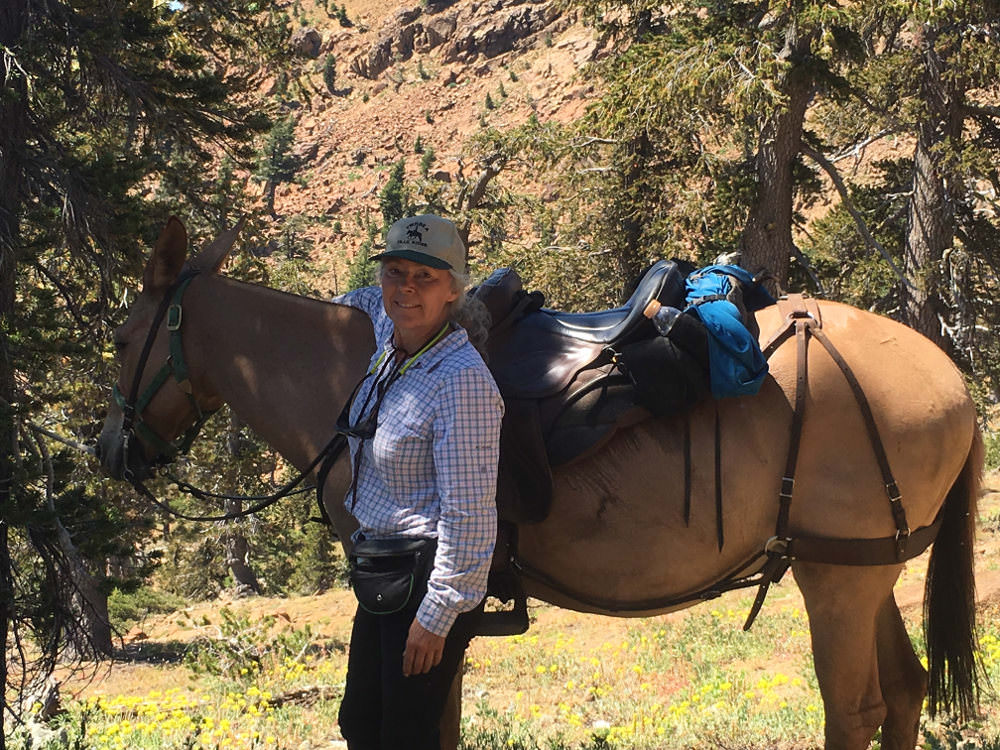 Serious horseback rider Terri Mielke of Wasilla, Alaska says you can never get too much saddle time in, and she certainly does her best to try. I met and rode with Terri in the backcountry of Alaska when I was there in September. We had lots to chat about while we rode through the magical forest in the Matanuska Lakes wilderness area, like about her adorable Welsh sport horse she was riding, Mickey. He’s a delightful and adorable nine-year old Dutch warmblood/Welsh pony cross.

Terri told me about having recently completed an epic equestrian journey: trailering her other horse – a Tennessee Walking horse named Joe – more than 8,000 miles from her home in Wasilla to the Bob Marshall Wilderness in Montana and back again, with a side-trip on the way home to ride the Trinity Alps in California with her sister thrown in.

Joe (aka Dynamic’s Spirit) is 11 year old dark liver chestnut with an adorable snip on his nose. She says he has an unusual color phase with minimal sabino markings and light roaning, called Rabicano. Joe was born in Tennessee and shipped up to Alaska in 2010.

While in the Bob, Terri and Joe embarked on a wild, scenic 8-day trip with Wilderness Outfitters. She had to campaign pretty hard before organizers would let her bring her own horse for the trip. She begged, pleaded and promised that she would be completely responsible for her horse and keep him from running off or engaging with the other horses. In the end, it all worked out. 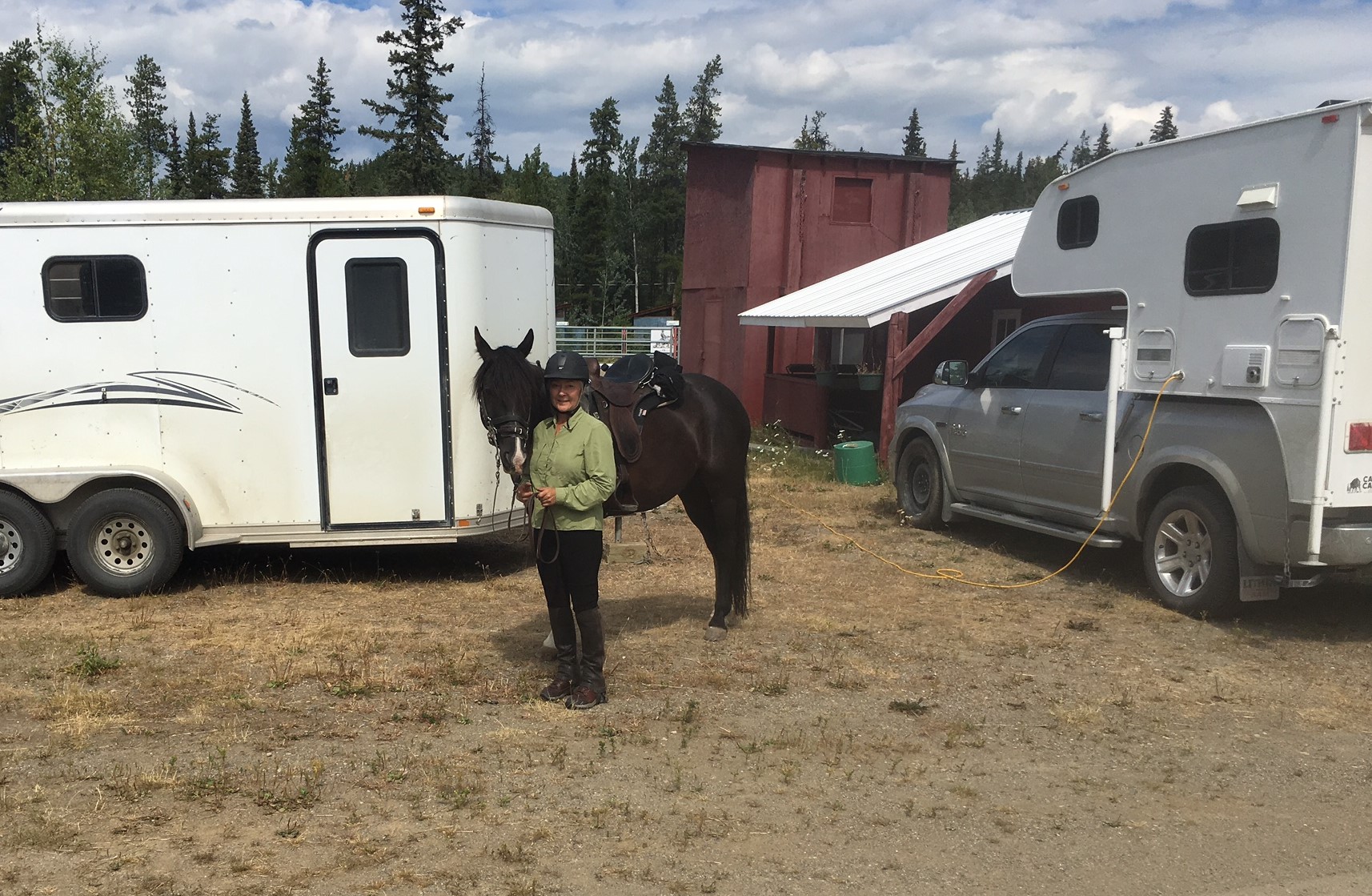 I asked Terri what was the wildest part of the trip. She said it was riding the cliffs. “I have acrophobia [that’s an irrational fear of heights] and an over-active imagination so traveling a single track trail with plunging drop offs was terrifying for me. Funny thing there were three totally inexperienced riders with us and they and blithely rode along totally relaxed. I have heard enough tales of horses going over cliffs to be nervous traveling precipitous drop-offs, including one of my friends that lost a horse off a cliff recently. We never had any incidents on this trip, but that never discouraged my imagination!”

When she left Montana and headed back west, she trailered Joe to Hayfork, California to ride with her sister, Karla Grasser and her husband, Boone Daniels in the Trinity Alps. They rode a friend’s mules into the stunning mountains and challenging trails, leaving Terri (the beautiful mule she rode was named Dylan) with a yearning to bring home one the sure-footed animals. “They are really mountain climbing machines,” she says.

Of course trailering 8,000 miles had its challenges, especially with a horse that is too polite to do his business in the trailer, meaning Terri had to pull over every few hours. “Unloading a single horse in a strange place next to a highway was nerve wracking,” she says. “But then he’d get a little grass, take a pee, poop, and refuse to drink water and off we would go to our next stop.” 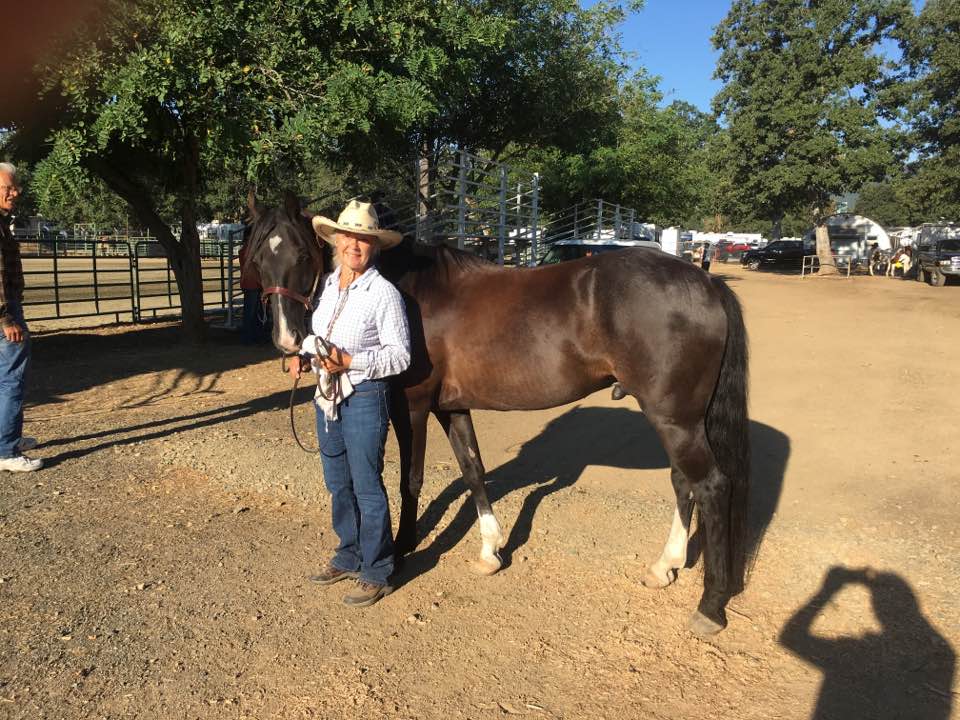 She did this all the way from Alaska to Montana, from Montana to California and from California back to Alaska again. Terri told me she had the same clean bedding in her trailer when she got to California that she started with in Alaska.

She meticulously planned overnight stops so Joe would be in horse-friendly accommodations. Joe adapted well to traveling, even though he lost some weight on the way to Montana. But from California to Alaska had the routine down and enjoyed fresh alfalfa hay all the way home.

Now that she’s back in Alaska for the winter (they’ve already had six inches of snow on the ground) Joe will get a break while Terri focuses on training Mickey in jumping and dressage and of course, his favorite: trail riding in the spectacular wilderness that is right outside her back door in Alaska.

5 Tips for Returning to Riding as an Adult