Home Lifestyle Painting Through the Pain

A familiar storyline in fiction is a protagonist going to the ends of the earth to be with the one he or she loves. In real life, Kasia Bukowska, an equestrian artist, said goodbye to family, friends, and Los Angeles in 2012 to be with her dream horse in Poland.

After her relocation, a mysterious illness threatened to keep Kasia out of the saddle permanently. However, a promising romance and painting her beloved equines buoyed her health. 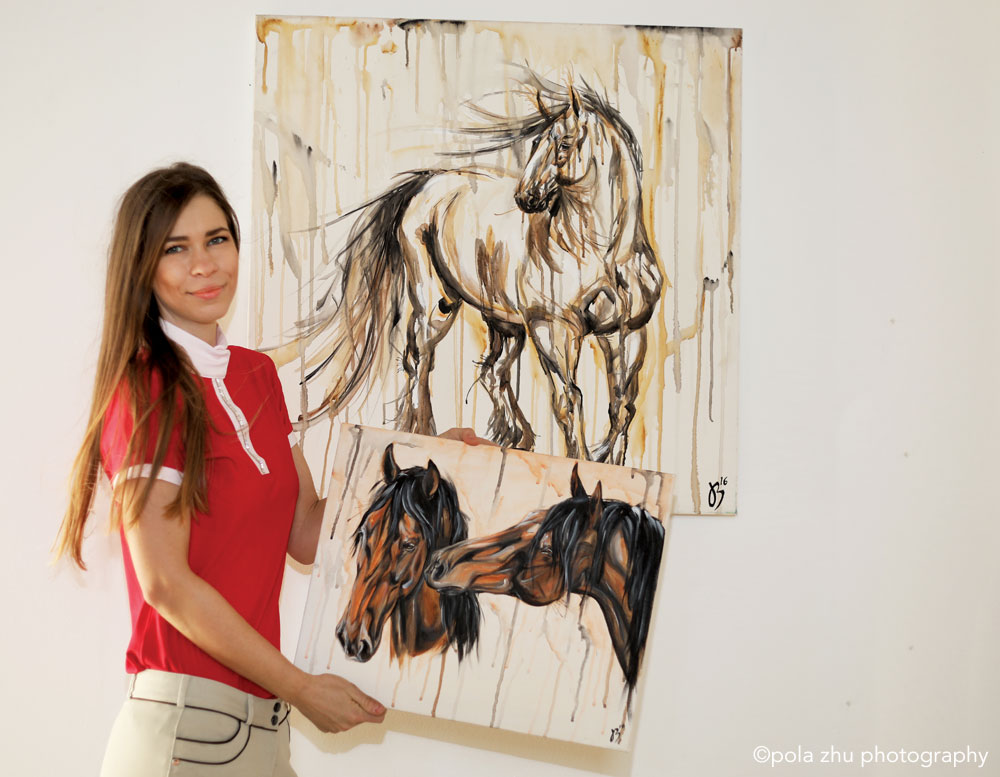 From Ponies to Poland

During her first pony ride as a tot, Kasia threw a tantrum when it was time to dismount. She remained in the saddle the whole afternoon. A few years later, Kasia’s father wanted her to spend summers in his home country of Poland.

“He persuaded me, saying I would get to ride every day,” says Kasia. “I fell in love with Poland—the people, the landscape, the horses, and all the foals! After that, I just kept going back every summer.” Returning to California during the school year, Kasia continued taking riding lessons and drawing horses.

Kasia’s home away from home, Hadrian Riding Center in Poland, had foals every summer.

“One year I saw a colt and thought he was the cutest foal I had ever seen,” she says. “There was something special. I just felt like he was ‘the one.’”

Four years after Kasia fell for the colt—his sire was a Holsteiner and his dam Malopołski (a combination of Arabian and Thoroughbred lines)—she became reacquainted with him as a young, full-of-himself stallion. He was named Sławny, which in Polish means “famous.”

“I stood by his stall for hours staring at him in awe,” says Kasia. She vowed to own him in the distant future, once he was retired.

However, Kasia heard Sławny was for sale a mere two years later. She decided to sell both horses she owned at the time, and made a down payment on her dream horse without ever riding him.

Her parents helped her with the payment plan, and the following summer Kasia left for Poland. Her intent was to train Sławny and attend a few horse shows before bringing him home to California.

“After two rides on him and one horse show, I decided to stay in Poland,” says Kasia. “I got the horse I fell in love with, and I wanted to continue training with the man who bred him.”

Teaching private English language lessons helped Kasia support herself and save for her horse-related goals. Meanwhile, when she wasn’t working or at the gym doing CrossFit or Zumba, Kasia was with Sławny.

At the barn she met Kamil, a mounted police officer. Despite a language barrier—Kasia was not fluent in Polish and Kamil did not speak English—a romance blossomed.

Four months into her relationship with Kamil, Kasia contracted the flu. Just as she started feeling better, her joints swelled. She felt like her skin was ripping and even her clothes hurt. She had high blood pressure, extreme fatigue, migraines that affected her vision, and pain like needles in her limbs.

“[I had] memory loss and I felt like I was digesting glass,” says Kasia.

As she bounced around to three different hospitals because no one knew the cause of her symptoms, Kamil appointed himself Kasia’s unofficial caregiver.

“He was with me before and after work, and when his boss wouldn’t let him take days off, he ‘got sick,’” Kasia recalls. “I said, ‘What if I never get better? And I’ll always be sick? You don’t have to be here.’” Kamil told Kasia he would build her a barn and wheel her out in a pink wheelchair. Her job would be to give her horses carrots and kisses.

When doctors told Kasia that she wouldn’t be able to ride, she felt guilty keeping Sławny. She felt he deserved a rider who could give him love and attention.

“Kamil kept me happy and positive,” she says. “He kept me from believing the million people who told me I was crazy. Most importantly, he kept me from selling Sławny!”

After steroid treatments, Kasia seemed to improve, but a month later the swelling returned. She went to approximately 20 doctors near Warsaw seeking help. Most prescribed antipsychotics, telling her it was all in her head.

“The last doctor I saw before my flight back to the U.S. to get more opinions about my illness diagnosed me with fibromyalgia,” Kasia recalls. Doctors at the University of Southern California Medical Center diagnosed Kasia with lupus and confirmed the earlier fibromyalgia diagnosis.

While Kasia still struggled to walk, she started painting from her bed. Prior to that, her preferred medium was pencil, which could be easily erased when she made a mistake.

“When I accidentally dripped paint on the canvas or happened to smear something with my arm, I decided that painting was just an exercise for me to express my feelings and accept myself and my mistakes. I started repeating, ‘my art is a series of mistakes’ in my head as I worked on any piece of artwork.”

The diagnoses propelled Kasia to fast track her life goals. Doctors recommended moving her body as much as she could, pushing past the pain.

“Eventually when I got strong enough, I went to yoga, and then the gym,” she says. “And finally, I decided that I was well on my way to being able to start a completely green horse!”

Owning a draft horse was one of Kasia’s goals, and after browsing the internet, she imported a Shire filly from England. When it dawned on Kasia how long the wait would be before she could ride her baby horse, she found another Shire, this time a mare she could work immediately. After adding Lilly (the filly) and Roxy to her herd, along came Lulu, an Akhal-Teke.

Horse motivation and appropriate medical treatment have dramatically changed Kasia’s condition. Today she only takes three pills per day and a fourth on Thursdays, compared to 20 per day when first diagnosed.

And the backyard barn that Kamil, now her husband, had promised her is a reality. Kasia’s equestrian story and art are one-of-a-kind: both are bold, bursting with color and optimism.

Your Horse Life: Riding Through Heartbreak