The evening before cross-country day at the 2019 Land Rover Kentucky Three-Day Event, I had the rare opportunity to learn about the cross-country course from a legend of the sport—Captain Mark Phillips. 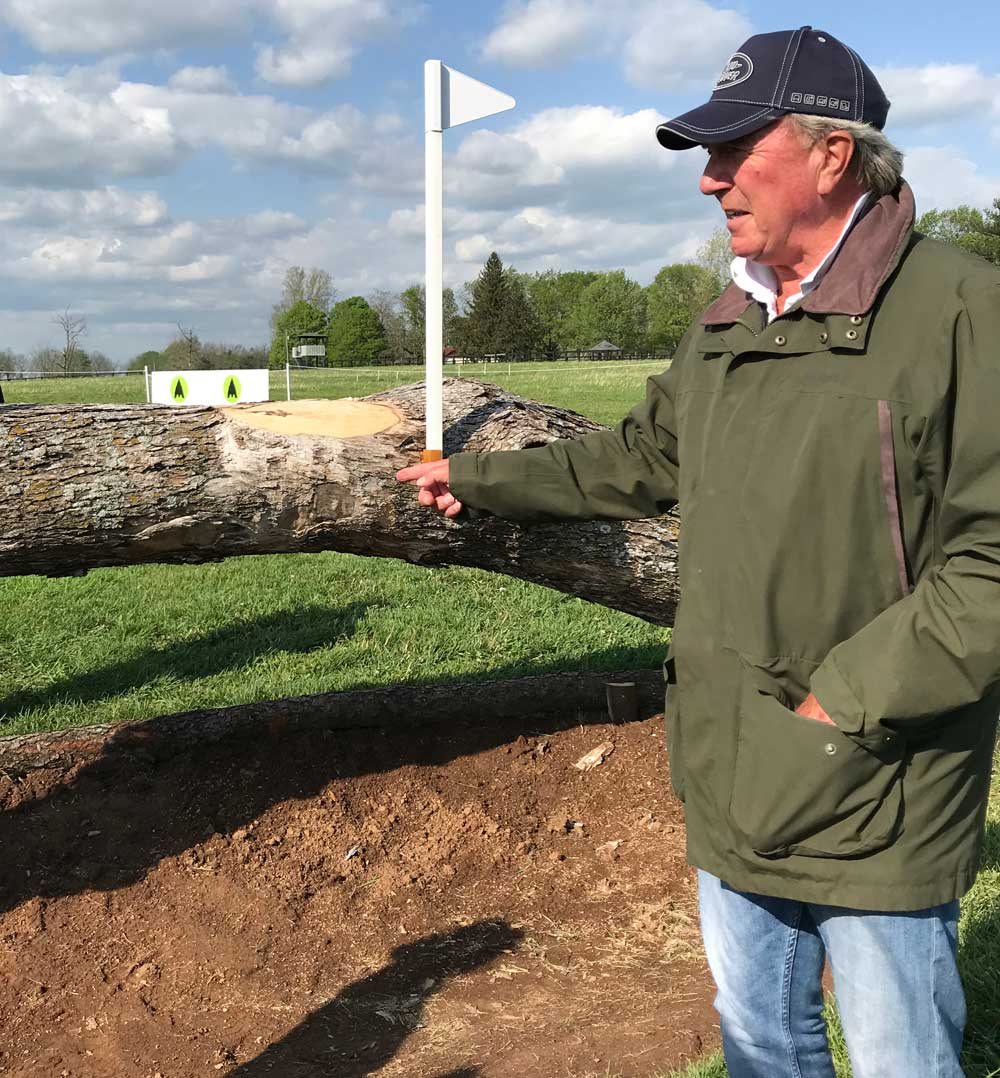 In addition to winning an Olympic team gold medal for Great Britain in 1972, he went on to coach the U.S. eventing team for 20 years and has been the long-time course designer for the five-star event at Burghley in England. In 2018, he designed the world championship course for the World Equestrian Games in Tryon, N.C.

(Non-horse people may know him from when he wed into the British royal family during his marriage to Princess Anne, daughter of Queen Elizabeth II. He and Princess Anne are the parents of Olympic eventing silver medalist Zara Tindall.)

Phillips and a representative from Land Rover loaded us into a beautiful blue Land Rover Discovery with third-row seating and lots of luxurious features, including leather seats and Interactive Driver Display easily within view in the windshield from the driver’s vantage, which includes speedometer and navigation. 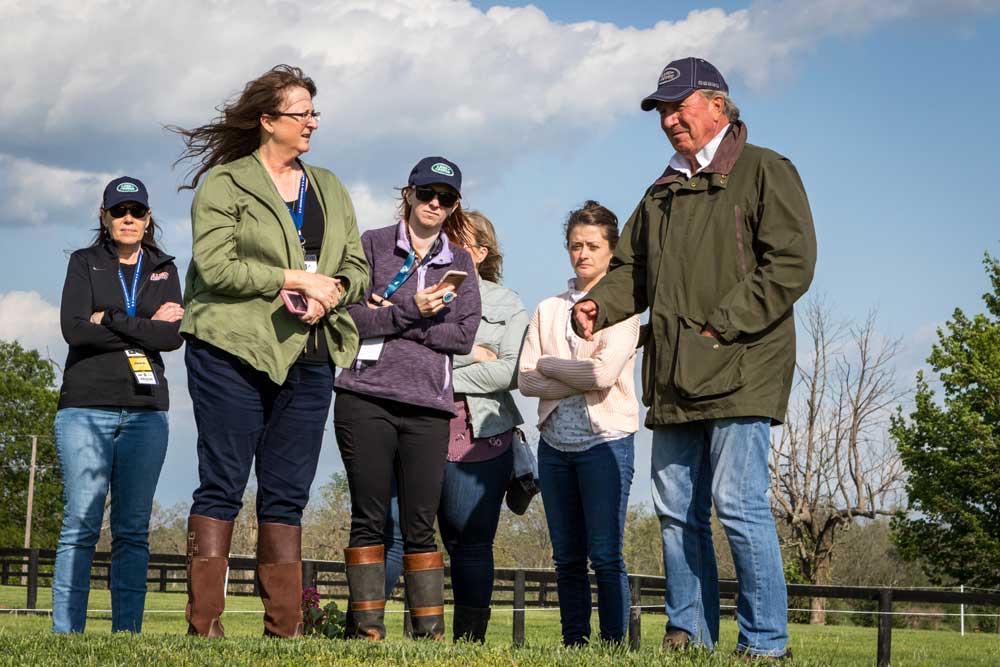 The first jump we approached was 7abc, the Park Question. The horse has a very steep downward plunge to negotiate in the terrain after a chunky table, but Phillips explained that they have plenty of strides—7 or 8—to set up for the first brush jump after coming up out of the depression. The second brush jump, however, was set at almost a right angle to the first brush and is just 4 or 5 strides away, making it a much more challenging turn and setup.

Next, we visited the Equestrian Events Overlook (9abc), a new complex on the course. A curving log set over a ditch with narrow set of flags demands a highly exacting landing site in order to set up the perfect three strides to an open corner. Phillips explained that the riders will want to make this easy for their horses by finding their line and sticking to it—and judging by the number of riders walking this line while we were there, they are already heeding his advice.

Although it’s much later on the actual course, we were near the Normandy Bank (20abc) and headed there next. Phillips felt the direct route here—up the bank, two strides down a steep slope to a solid left-hand corner with brush on top (solid height 3’9” with brush height of 4’9”)—could be a site of runouts tomorrow on the cross-country course. He said if he were up on the clock, he would prefer the alternate route, which gives you many more strides to an alternate corner but would add about 8 seconds of time.

After that, we drove to the furthest and highest point on course, Pete’s Hollow (13abc). Here, Phillips said the cabin at the lip of the crater was an easy jump for these pairs, but the direct option back up the slope to a corner on a “pimple” (basically jumping off an uphill approach with a drop landing) could be problematic.

He felt the option of the longer route to a second cabin followed by a corner on flat ground—which means one extra jumping effort—was much kinder for any pairs that may be inexperienced or uncertain. Still, he says, sometimes their judgement may be clouded by visions of greatness and they try the direct route but pay with a runout. I plan to watch this jump tomorrow on the cross-country course at the 2019 Kentucky Three-Day Event to find out! 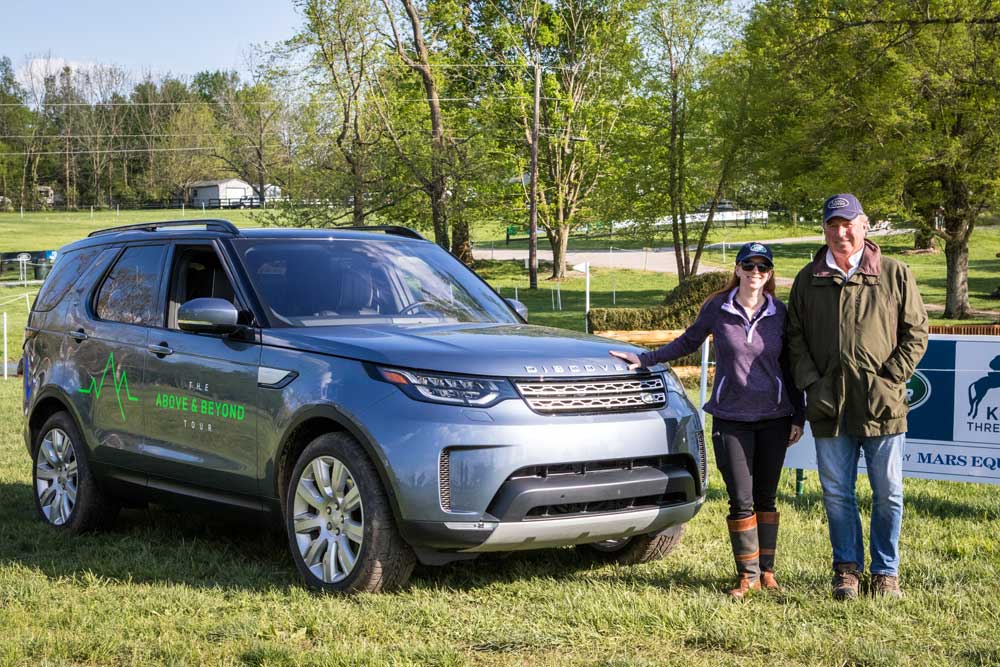 We ended at the famous Head of the Lake complex (17abcd and 18abc), a spectator favorite. Phillips felt it would ride much easier due to the second obstacle being quite far from the drop into the water for this year’s course at the 2019 Kentucky Three-Day Event. If a rider gets shaken loose a bit, they’ll still have time to recoup before jumping a carved goose at the water’s edge.

They will then jump a forgiving brush back into the water, followed by an up-bank and bounce to angled brush. Phillips said there may be runouts here if a horse misses a foot getting onto the bank, as bounces are not forgiving, so this last element at the lake may be where hearts are broken. There is a longer route, but he felt it was not worth attempting as it eats up so much time and the direct route isn’t as hard as in years past. 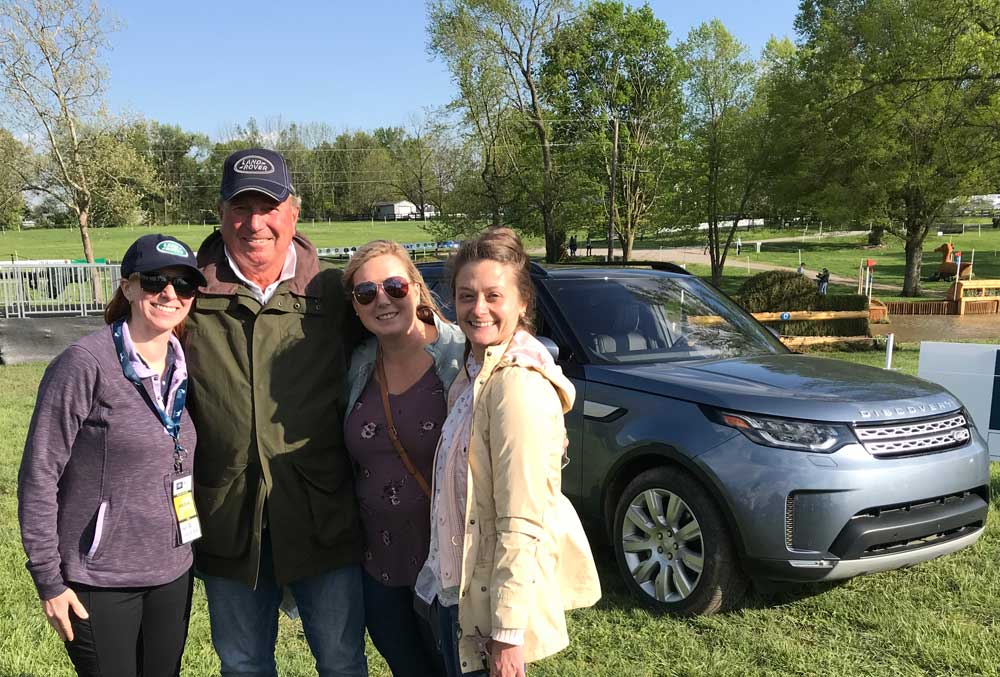 Many thanks to Land Rover for making this cross-country course ride possible! If you are here on the course in person at the Land Rover Kentucky Three-Day Event, please be sure to check out the famous Land Rover Test Track and go for an exciting drive over hill and dale, through water and over a bridge and teeter-totter.

Updated: 2020 Road to the Horse Postponed to June