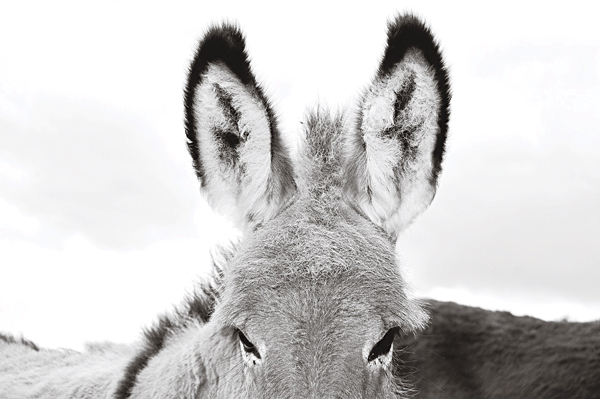 The oldest horse I’d ever worked on was 34, so when Robyn announced that her donkey was 47, I was amazed and a little doubtful. But she was certain of her dates, and after looking at fuzzy and ancient little Roger for the first time, I agreed that he was definitely a really old donkey.

He did have teeth, although they were extremely worn down. After studying his incisors—yellowed lumps of polished enamel with no recognizable features—I gave up trying to age him.

His ears drooped at disreputable angles, and his eyes were almost completely hidden by a shock of fuzz. The crest of Roger’s neck hung perilously to one side, and he tended to blunder into objects, as his eyesight was very poor.

Roger had no problem snapping up treats, and this remained the best way to assess his wellbeing and cognitive function. The day that he stopped eating was probably going to be the day he finally gave up and died.

Roger had the run of his farm, and while the owners had done their best to donkey-proof the environment, he still managed to find ways to get himself into trouble.

There was a slightly raised platform in the barn, maybe 12 inches high, where utensils and a wheelbarrow were stored, and Roger blundered behind it one day and managed to get himself stuck for several hours. The owners were able to free him after some creative moves with ropes, and they blocked off access to the spot in case Roger got any more ideas.

Everywhere you looked on the farm was another barricaded zone where Roger had caused or thought about causing some degree of mayhem, and it seemed to be fairly safe for the old man.

But one day Roger had not gotten the memo and completely outdid himself, sneaking to the top of a steep grassy hill behind the barn when no one was looking. He lost his balance and tumbled down the slope, landing miraculously upright against the barn in a dug-out area banked with railroad ties. He was good and stuck, with one leg jammed underneath the aluminum wall of the pole barn.

The neighborhood Roger alert was sounded, and soon reinforcements arrived. It was several hours before the really old donkey could be freed, and it was hard on him and the neighbors both. His distraught owners called me to come look him over and sew up a few lacerations he’d sustained during the ordeal, and I came out the next morning.

Roger was annoyed at being kept inside for my visit, and he kept blundering in circles on top of me and my equipment. He didn’t weigh much, being a small donkey, but his hooves hurt when they pressed into the tops of my feet. The owners short-tied him to a rail, which made him mad. Because of his age, I didn’t dare give him a regular sedative, so I injected him with some Valium, which affected him minimally.

He had a decent-sized laceration on one front leg and another on the opposite hind. He tolerated me clipping the wounds reasonably well. When I went to scrubbing and trying to numb the wounds, things changed, and Roger danced from side to side, waved feet threateningly and air kicked a few times just to let me know he still had it in him. I believed him, and 47 or not, I figured a kick from those sharp hooves would still hurt, so I was careful.

Robyn’s husband Ed had to hold up a hind leg for me to get a suture placed in the deepest wound, and Robyn distracted Roger with a mixture of treats, head-thumping, a twitch, and by howling loudly in his drooping ears while I danced awkwardly around the kicking leg trying to tie my sloppy suture. Ed grunted and sweated, doggedly holding on to the limb, and all three of us realized that while we might not be in Roger’s age range, we were definitely not in our 20s anymore.

Finally it was done, the last knot was tied, and Roger gave all of us menacing looks as we cleaned up the mess around him. Robyn untied him and he made angry circles around all of us, at one point butting me out of the way, and I snatched up my kit before he could knock it into the dirt.

Sweet talk and attempts at petting Roger only made him madder. At last Robyn brought him some treats, which he haughtily ignored.

I gave Robyn some antiseptic spray for the wounds. I didn’t dare put Roger on systemic antibiotics, having given him a horrible case of diarrhea the year before when I put him on oral medications for a skin infection. He was just going to have to take his chances.

I was packing up the truck as Ed marched past me, a roll of fencing wire under his arm and a bucket of tools in his hands. Another Roger-proofing was underway. Robyn shook her head.

“What next, Dr. Diehl? I swear, just when you think you’ve covered everything that he could possibly hurt himself on, he finds something else!”

I didn’t have any suggestions, and there were definitely no husbandry tips in any of my texts or journals regarding the care and feeding of a 47-year-old donkey. I figured we’d all just have to keep winging it.

Roger healed well, went back to eating with his usual gusto, and as of today, has managed to stay out of further trouble. Ed and Robyn continue to Roger-proof the farm as possible trouble spots occur to them, so it seems likely that the old man will live to see 48.

This article about one really old donkey originally appeared in the October 2019 issue of Horse Illustrated magazine. Click here to subscribe!