Home Horse Entertainment Horse Books Getting Started Right: Retraining the Thoroughbred from Racehorse to Riding Horse
When retraining a racehorse, for the early days of training an off-track Thoroughbred (OTTB) under saddle, choose mild days with little to no wind, when the arena or paddock is quietest and without external distractions. And, if your schedule allows, work your horse around the same time each day with the same feed, turnout, and grooming schedule as you’ve already established. Always reserve plenty of time to groom your horse and tack up as it can be a relaxing preparation for ridden work.

Before mounting, longe your horse for at least 5 to 10 minutes to “get any bucks out” and loosen up his muscles and joints. For your first several rides, it is beneficial to include a couple of minutes in side reins, which will help the horse focus on working in a correct outline and encourage him to relax his neck and back muscles before you get on.

Get a leg-up or use a mounting block, then allow your horse to just walk around, relax, and get used to his surroundings and your weight on his back. Some horses walk more calmly after trotting around a bit first. Insecure horses may find it comforting to have a person walk alongside them for a while. After a few rides, you will learn what works best for your horse and you can tailor the warm-up routine to his needs and personality.

Seat: Most exercise riders at the track weigh between 115 and 150 pounds. In the early stages of training a OTTB, you should sit lightly on your horse’s back as he gets used to carrying your weight—sitting tall and imagining yourself “light as a feather” can help. While it can work to have a smaller rider start your horse the first few times, the rider’s ability to control his position in the saddle is more important than his actual weight.

Legs: Your legs should rest lightly on your horse’s sides; if he overreacts to even slight leg pressure, put more weight in your stirrups to help keep your leg contact as minimal as possible.

Each off-track Thoroughbred (OTTB) reacts differently to leg pressure; some are perfectly fine with it, while others are extremely sensitive, especially at the beginning of the ride.

Hands: Your hands must be steady in order to maintain a light contact to the bit. Relax your elbows so they act like hinges and allow your arms—and thus your hands—to follow the movement of the horse’s head with an elastic connection. If your elbow joints are tense and locked, your hands will pull against the horse’s mouth. This, in turn, causes him to tense up.

Many OTTBs like to hang on the bit when being ridden. Exercise riders normally allow this as long as the horse is doing his job. But, in his new life as a riding horse, he needs to learn that this is not acceptable; he must learn to accept a light, steady contact on his mouth while moving forward.

Longeing with side reins helps correct this prior to under-saddle work, but some horses revert to hanging on the bit once a rider is on their back. You can teach your horse to trust the contact by maintaining the elastic connection from your hand to his mouth. Follow his motion and encourage him to move forward off your leg.

Do not fight with your horse if he also revisits old habits like head-tossing or overflexing. The answer again is to remain giving with your hands and push him forward.

Focus on maintaining a consistent rhythm. The horse should be used to maintaining a rhythm at the canter from his days at the track, and your work on the longeline should have begun to establish steady rhythm at any gait. Once you are in the saddle, it is up to you to sense when he is slow or rushing.

Do what you can to control your own body in order to have an effect on his—if he wants to rush at the trot, for example, pulling in response will only send an OTTB rushing forward even faster. Instead, use your body by slowing your posting down (linger a little longer in the “up” phase), and maintain a light, steady contact on the reins.

Many OTTBs like to hang on the bit when being ridden. Exercise riders normally allow this as long as the horse is doing his job. But, in his new life as a riding horse, he needs to learn that this is not acceptable; he must learn to accept a light, steady contact on his mouth while moving forward.

This is not the time to be concerned with the horse’s head carriage or where his head position happens to be; working in a correct, rounded outline can come later. For now, you should simply send—or allow—the horse to go forward. Some horses will toss their head, pull against the bit, stick their head in the air, or tuck their chin in toward their chest to evade the bit.

Rather than pull against these evasions, send your horse steadily forward and ride him through the problem. If you do not focus on the bad behavior but instead make him think about always moving forward, he will eventually realize it is more work to trot while tossing his head (for example), than it is to simply trot.

A couple of important things for an OTTB to learn early in his training are the halt and half-halt. Racehorses rarely have to stand still for very long with a rider on their back, so at first, do not expect him to stand still for more than a second or two at the halt.

The verbal command “whoa” should have been confirmed on the longeline, giving you a place to build from under saddle.

When retraining a racehorse, your first transitions to halt should be from the walk. Do not practice it from other gaits until your horse’s walk-halt transitions are accomplished calmly, without fuss.

◆ Say “whoa” while sitting deep into the saddle with your heels down. Close your leg as you close your hands around the reins. Hold them still until the horse halts. If he doesn’t halt after several strides, give and take on the reins until he does.
◆ Once he stops, even if only for a second, immediately relax your seat, hands, and legs, and praise him.
◆ Ask the horse to walk forward several steps before halting again.

This is a simple exercise, but it may take several days for the horse to understand. Gradually ask him to stand still a little longer, and eventually he will pay attention to your seat and hands and stand quietly until you ask him to move forward again. Once you teach the horse that when you sit deep in the saddle you want him to slow down, you have taught him a key lesson that will help you ride him well in all three gaits.

When retraining an off-the-track Thoroughbred half-halt is an invaluable tool used for many purposes. It can help bring a horse’s attention back to his rider, refocusing him and “waking him up.” It can balance a horse in preparation for a transition, a turn, or any movement such as a circle or figure eight. It can also be used every few strides to rebalance or collect the horse. Whatever your discipline or riding goal, the half-halt is an important lesson. 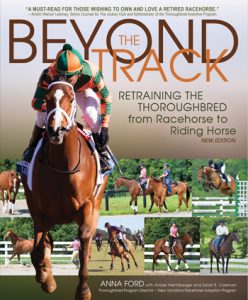 The aids for the half-halt are closely related to the aids for halt: you ask by closing your legs, sitting up tall, and closing your hands all at the same time for only a couple seconds—then releasing the aids. A half-halt is a momentary action; as soon as it is performed, it is done. Concentrate on giving very clear aids in this exercise. OTTBs learn quickly and your horse will respond well to correctly given aids, but he will also get frustrated if you give him mixed signals.

As the horse starts to understand and respond to your half-halts, ask him to go forward while you maintain a steady contact with his mouth.

By Anna Ford with Amber Heintzberger and Sarah E. Coleman. Adapted from the new edition of the book Beyond the Track and reprinted with permission from Trafalgar Square Books (www.horseandriderbooks.com).

This article about retraining a racehorse originally appeared in the October 2019 issue of Horse Illustrated magazine. Click here to subscribe!