Show jumping is the most popular international equestrian sport, and it kicked off in earnest today with 124 horse-and-rider pairs taking their shot at the first competitive round of the FEI World Equestrian Games Tryon 2018. This initial round was run as a speed round where time is converted to penalties to determine the score, and there is no jump off.

Americans McLain Ward riding the Oldenburg mare, Clinta, and Laura Kraut with the Holsteiner gelding, Zeremonie, both went clear. Ward finished in eighth place overall while Kraut finished 12th. Kraut and Ward are both veterans of past Olympic and WEG teams for the U.S at 2018 WEG.

The other half of the American team consists of two WEG first-timers: Devin Ryan and the Dutch Warmblood Eddie Blue and Adrienne Sternlicht and Cristalline. Both had good rounds with just one rail each. Ryan finished 38th overall and Sternlicht came in 45th at 2018 WEG.

All four American riders will return to ride again tomorrow in the second round of show jumping, which begins at 9:00 a.m. EDT at 2018 WEG.

Para-dressage continued today with the individual tests for grades III and I. American rider Rebecca Hart, currently competing in her third WEG, rode El Corona Textel, a Dutch Warmblood gelding, to a 72.235% and a bronze medal finish at 2018 WEG.

In the grade I division, 2016 Paralympic team member Roxanne Trunnel of the U.S. made her WEG debut with Kate Shoemaker’s 6-year-old Hanoverian gelding, Dolton. She scored a 72.143% and finished in fifth place at 2018 WEG.

Italy’s Sara Morganti repeated her gold-medal win from the 2014 WEG, scoring a 74.750 with her Rheinlander mare, Royal Delight. Laurentia Yen-Yi Tan of Singapore won the silver with Fuerst Sherlock, and Elke Philipp of Germany took the bronze with Fuerst Sinclair at 2018 WEG.

After yesterday’s compulsory rounds, things got more exciting with the first of the vaulting freestyle rounds for individual male, individual female, pas de deux and teams at 2018 WEG.

The first of the pas de deux freestyles ended with Austria’s Jasmin Lindner and Lukas Wacha in the top spot on the leaderboard. Daniel Janes returned with Haley Smith in the pairs to end the day with the sixth place score for the U.S. Kathryn Keville and Florence Rubinger also vaulted for the U.S. today and finished in eighth place at 2018 WEG.

For the first time this year, a nations cup style vaulting competition took place with two individual vaulters and one squad from each country competing for team medals. The team from Germany took home the gold medal. Switzerland won silver and Austria took the bronze. The U.S. team finished in fifth place overall at 2018 WEg.

Vaulting, para-dressage, and show jumping will all continue tomorrow, Thursday, September 20. Show jumping sessions begin at 9:00 a.m. and 1:30 p.m. EDT and both are scheduled to air live on Olympic Channel. The vaulting pas de deux freestyle will air live at 6 p.m. on NBCSN.

Para-dressage team tests for grades II, IV, and V, are on the schedule for tomorrow and will be broadcast for FEI TV subscribers at tv.fei.org.

The one sport we haven’t seen yet at this WEG is combined driving. Competition begins Friday. The horses will have their first inspection tomorrow at 2018 WEG.

Your WEG Moment of the Day for Wednesday, September 19: The vaulting team from Italy completes a daring stunt where the flyer is thrown into a flip…and successfully caught! 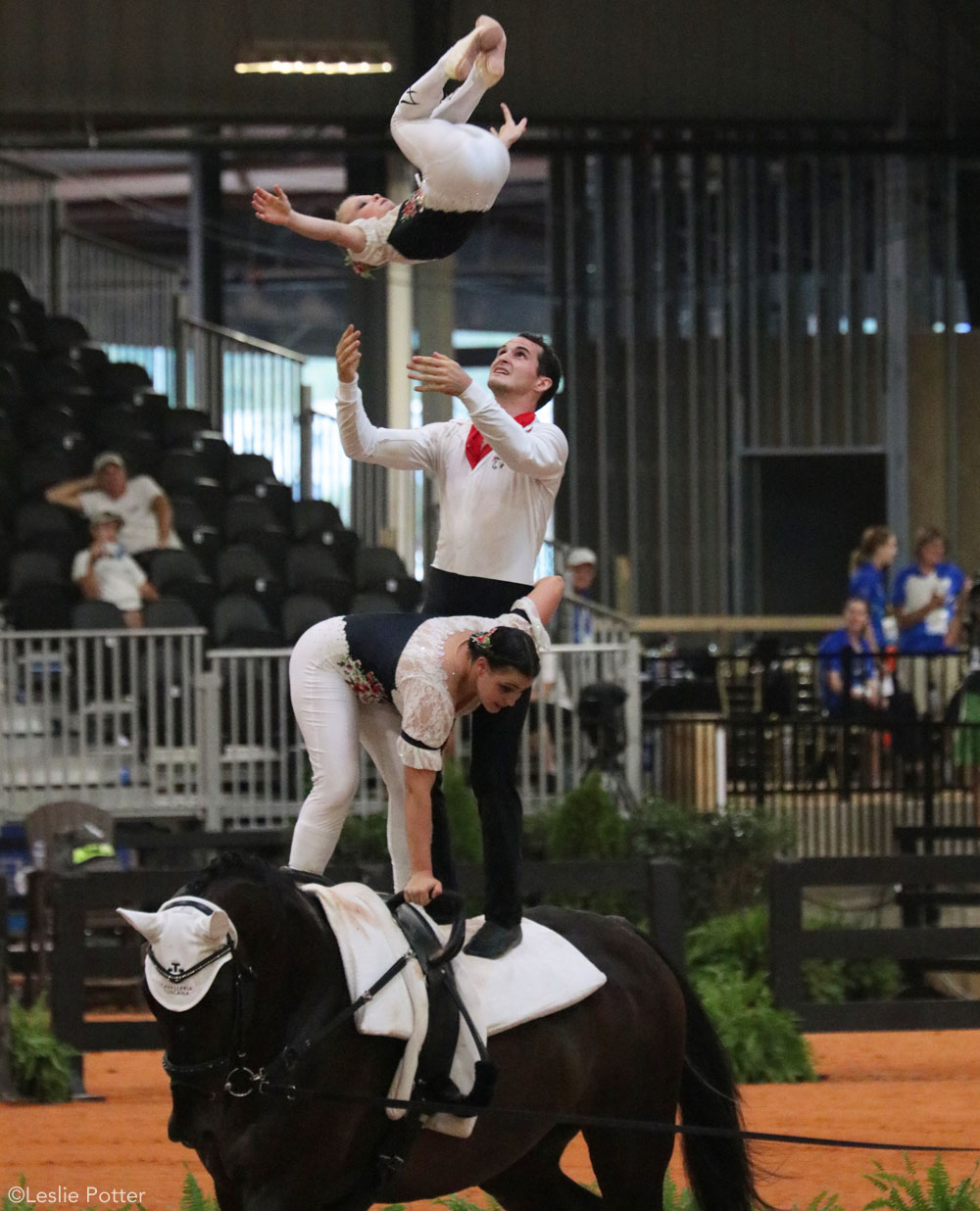 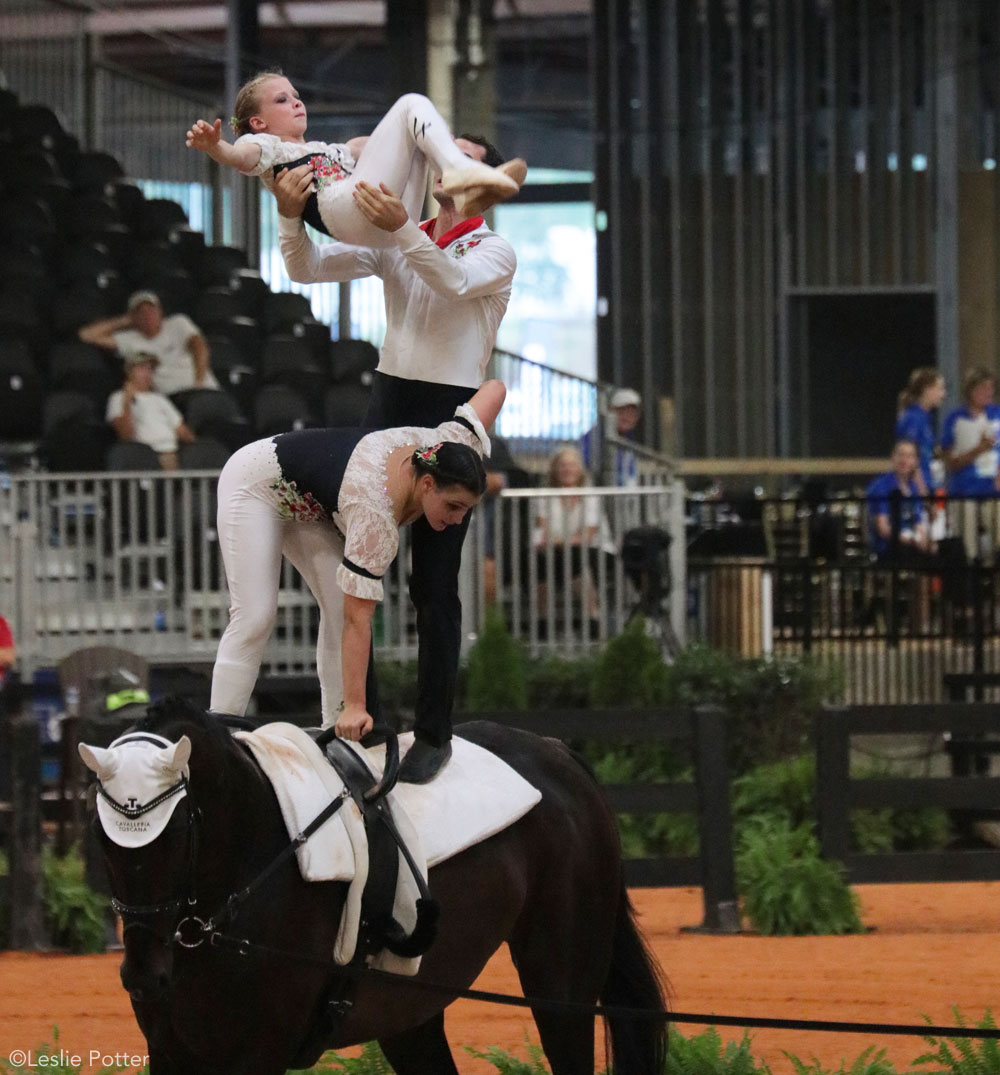 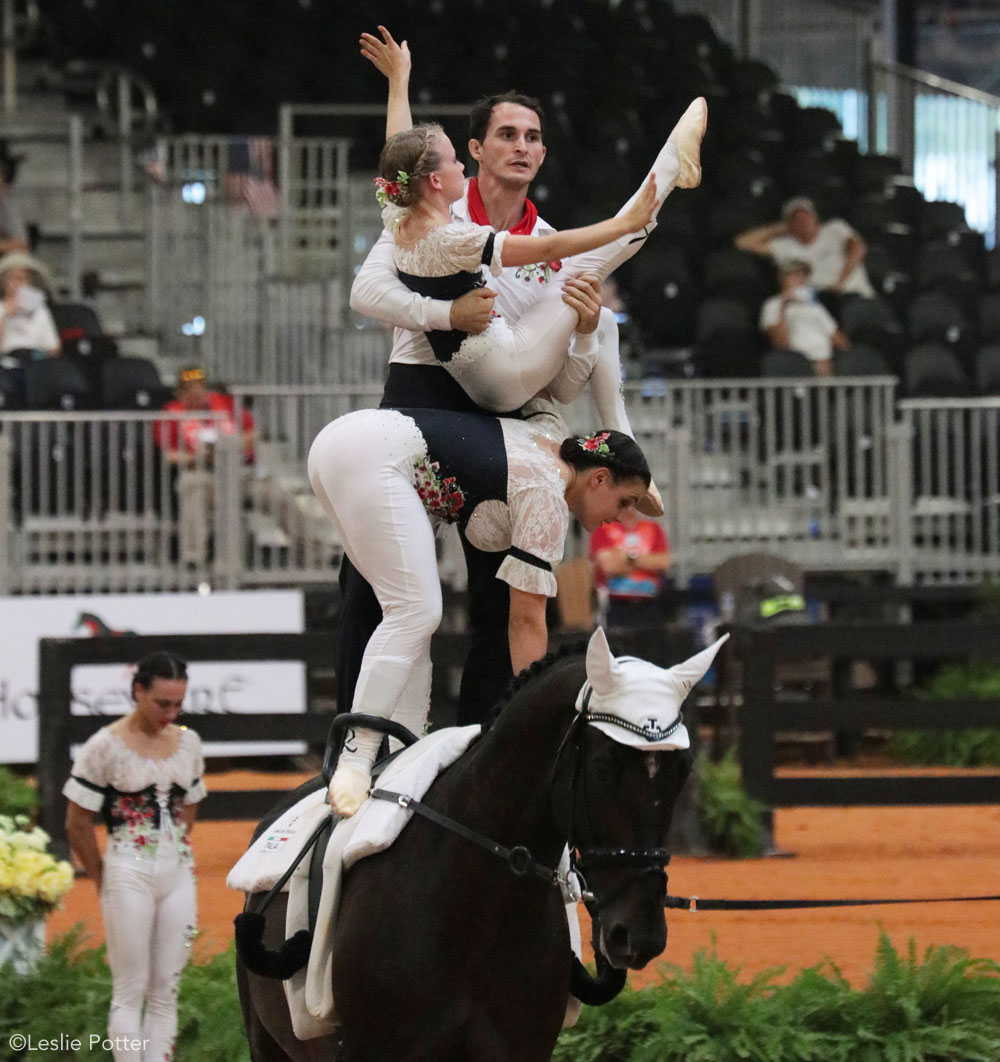