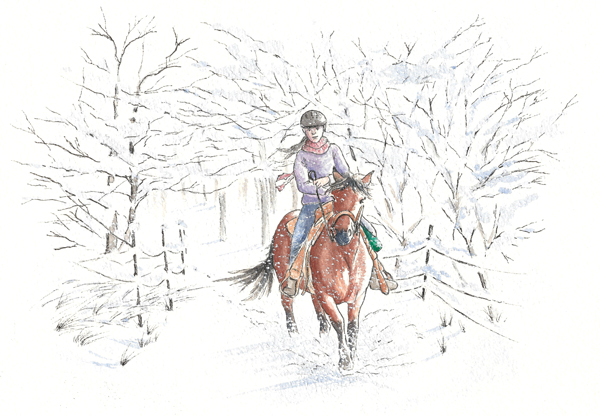 Callie Hudson stood on the porch and stomped her feet. The snow fell off her boots in thick, wet lumps. Then she turned the handle on her front door and went inside. She could hear her mother in the kitchen, the aromas of cinnamon and nutmeg leftover from last night’s baking.

Callie stepped into the kitchen. Her mother was untying her apron, the one with the felt snowmen sewn across the front.

“I understand,” her mother said quickly. “Everything is mixed up because of last night’s storm. I’ve got to pick up Nana from the airport, so I need you to make a delivery.”

As she spoke, Callie’s mother stacked homemade goodies into a decorated tin box; gingerbread men nestled alongside cubes of fudge. Sugar cookies, cut in the shape of prancing ponies, were the top layer. She snapped the lid in place and bound it all up with a red bow. Then she slid it inside a bright green gift bag and handed it to Callie.

“Where am I taking this?” Callie asked.

“Over to Mrs. Reed,” her mother replied. “That dear woman is all alone now on that big ranch. Showing her some kindness is the right thing to do, especially at Christmas.”

Her words were nearly swept away as she grabbed the truck keys and sprinted out the door. “I’ve got to get to the airport. Bye!”

“Wait!” Callie yelled from the doorway. “How am I supposed to get to Mrs. Reed’s?”

Callie watched her mother drive away and considered her task. Ruby was the family’s most dependable mount, and she happily went anywhere. Wintery weather wouldn’t bother Ruby.

Callie picked up the gift bag and walked outside to Ruby’s corral. Ruby stood in bright contrast to the December scene. A red bay, she was the color of cherry cola, with a bushy black mane and long tail. She nuzzled Callie softly while the girl brushed her thick coat and tacked her up.

“I’m going to play Santa,” Callie said to the mare. “I guess that makes you my magic reindeer!”

Callie led Ruby out to the trail. It stretched over hills and across pastures, from one ranch to another. She climbed into the saddle and looped the handles of the gift bag around the saddle horn. The ride to Mrs. Reed’s place began so pleasantly that Callie started singing Christmas carols. Ruby flicked her ears back to listen as she jogged along the frosty trail. And then it started to snow.

At first it was just a light flurry. The snowflakes danced and swirled to the ground. But then the sky turned stark white, and the air became eerily silent. Suddenly, snowflakes as big as pennies poured from above. The white stuff stuck to Ruby’s mane and the tips of her ears. Callie had to reach up and wipe away tiny icicles that formed on the brim of her helmet. Should she turn Ruby around?

Callie thought of Mrs. Reed, and made the decision to continue. She nudged Ruby with her heels and the little mare lowered her head and trudged bravely onward. Her hooves shuffled through the powdery snow that was beginning to blanket the trail. Just as Callie feared that she and Ruby might lose their way, she saw the outline of a dark shape ahead.

It was Mrs. Reed’s ranch house! Callie kissed Ruby and the mare trotted through the snow, right up to the front door.

Callie slid out of the saddle. She could barely hold the end of the reins with one hand and knock on the door with the other. Slowly it opened. Mrs. Reed stood on the other side. She was tall, with thick dark curls that were streaked with gray.

“Callie? Callie Hudson? What are you doing here in this awful weather?” she asked.

“My mom and I made holiday treats,” Callie shared about the special delivery she had just delivered on horseback. “And we thought you’d like some. There are even sugar cookies that look like ponies. I used chocolate chips on some to make them look like Appaloosas.”

Mrs. Reed took the gift bag and held it high, admiring it. “Oh my,” she said.

“It all sounds so scrumptious. But I must ask you, Callie: How did you get here?”

Callie took a step back and motioned toward her horse. “I rode Ruby.” 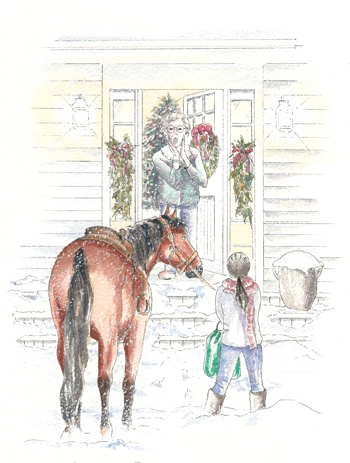 Mrs. Reed peered through the snowfall until her eyes settled on Ruby. “Well, Merry Christmas, Ruby,” she said. She reached out and stroked the mare’s forelock. “I once had a little bay mare like this. Her name was Lady. We’d gallop across the meadow with the wind in our faces. Those were wonderful memories.”

“Do you still have horses?” Callie asked.

Mrs. Reed took a breath and smiled. “No, but sometimes I horse-sit for the neighbors when they go on vacation. In fact, I have a cozy stall in the barn, and some fresh hay. I’ll bet Ruby would enjoy it while we wait out this storm. I’ll call your mom and let her know you and Ruby are safe here with me.”

A Break from the Storm

Callie thought silently to herself. Mrs. Reed would enjoy the visit. Plus, her house sure looked nice. The fireplace was lit and glittery decorations hung from an evergreen tree in the corner. “I suppose that’s a good idea,” she finally said. “Ruby would like it, too.”

Mrs. Reed tossed a thick jacket over her shoulder. “Okay, we’ll take Ruby out to my holiday inn. Then we’ll come inside and have hot cocoa with peppermint sticks.”

“That sounds great!” Callie said. “Can we also share stories about horses?”

Mrs. Reed patted Ruby on the neck and pointed toward the barn. “Why yes! In my mind there are no better Christmas stories than ones that include horses,” she said.

This short story about delivery of a special delivery on horseback originally appeared in the November/December 2019 issue of Young Rider magazine. Click here to subscribe!