Equine botulism toxicity was a grim diagnosis. Cathy and I tried to reassure each other as the expensive antitoxin was administered to Hans at the veterinary hospital. Equine botulism toxin works in a very specific way, binding itself to proteins between the nerves and the muscles, and causing generalized weakness and sometimes complete paralysis. Hans’ only hope was the antitoxin and a lengthy hospitalization. That was, if he survived.

I had only seen two cases of equine botulism in my career, and they were both horrifying. Horses are exquisitely sensitive to the toxin—it takes more to kill a mouse than a horse, so even a few mouthfuls of contaminated feed can be deadly.

The clinicians at the hospital stressed that while the source was most likely his hay, there was no way to be sure. And they still couldn’t fully rule out rabies, so everyone who had handled Hans had to be considered exposed.

In the Thick of Equine Botulism

Hans remained stable over the next few days, although he wasn’t producing much manure, and his intestines were still very sluggish. His risk of aspiration pneumonia was high, so he received regular fluids and feedings through a stomach tube. An IV drip containing essential electrolytes ran around the clock.

The clinicians reported that he’d lay down about every 20 minutes to rest, but the important thing was that Hans always got up. Every time I spoke to a member of Hans’ team, it was the first thing they’d describe—the big horse’s remarkable ability to always get to his feet.

Progress was slow over the next week, and the team worried that Hans was not getting enough calories, so they increased his feedings. The bill increased by the day.

Cathy wasn’t made of money, but she was determined to save her horse, and if the hospital recommended something, she approved it without question. Because of the COVID pandemic, she couldn’t even visit Hans, and the kind clinicians often made video calls from Hans’ stall so Cathy could see and talk to her beloved horse.

The entire hospital seemed to be involved in Hans’ case, and he was quickly developing a fan club. Vet students would stop by throughout the day to check on him and groom him, and there was always a technician nearby watching his fluids, administering medications and recording his patterns of laying down and getting to his feet.

Hans never once faltered. When he wanted to stand, bedding would fly around as he bravely lurched to his feet, his IV fluid bags swinging wildly from their overhead hook. But he always got up.

When an equine botulism case goes down and can’t rise, the outlook is grave, even with intensive care. The horse must be maintained on a special airbed and turned from side to side and supported in sternal position periodically.

Pressure sores develop, and colic and pneumonia are ever-present risks. It’s a long waiting game to see if the patient can rebuild the damaged nerve connections to the muscles. Full recovery can take months.

But Hans never went down completely. I admired how cool and collected Cathy was. So many owners would have been upset about the growing bill, but Cathy was always grateful and kind.

Hans was eventually able to take in a slurry of grain and water on his own, although he still couldn’t chew normally. The staff began to take him for short walks to the end of the aisle and back, an army of supporters flanking him neatly in case he lost his balance. Hans tired quickly, and after the walks he always lay down and slept deeply, but true to form, would get to his feet when he woke.

On day 26, the clinicians thought that Hans was finally strong enough to go home. It was a ceremonious occasion, and there were dozens of socially distanced hospital staff, doctors and vet students hugging Hans goodbye and wiping their eyes.

His thickly bedded trailer waited in the parking lot. Cathy had bought Hans a beautiful new blanket and matching shipping boots. He was buckled into his finery, and the staff cheered as he boarded the trailer and they drove off. Cathy was still waving as they rounded the corner and disappeared from sight.

It’s always bittersweet to clean the stall after a longtime patient has gone home. Hans’ thermometer, stethoscope and charts hung from the door, and his empty fluid bags and coiled IV line dangled from the overhead hook. A trash can full of exam gloves and plastic gowns sat in the aisle, and a bleach foot bath was nearby.

There was a bucket of brushes with Hans’ tail hairs tangled through the bristles, his half-eaten grain slurry still in the feeder. The technicians and barn crew sadly stripped his stall and scrubbed and disinfected the floor and walls, and soon there was no sign that he’d been there at all.

Hans moved into a small pen with a large stall and continued his recovery. It was a year before he was cleared to ride, and even then, Cathy kept him to a walk on easy trails.

When she paid the enormous bill, she enclosed a note to the hospital staff.

“I’ve battled depression for the past year, and it was at its worst when I thought we were going to lose Hans to equine botulism. But every time you gave me encouraging news and told me what a fighter he was, I fought harder, too. Every time you told me that Hans always got to his feet, it encouraged me to get up too, and we’re both out of the woods now, thanks to you and your staff of angels. Love forever, Cathy and Hans.”

This Vet Adventures column about equine botulism appeared in the June 2021 issue of Horse Illustrated magazine. Click here to subscribe! 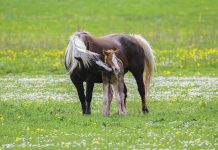 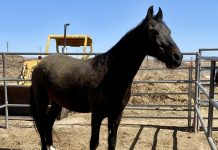 To Bit or Not to Bit?