It was a late start getting back into shape for Zephyr this year. Daylight saving time began March 8, so I resumed after-work riding that week–for one whole day before Zephyr managed to get a nasty puncture wound right over his stifle joint (thankfully not IN it, though). After another week or so off to medicate and dress the wound, we were back to work for attempt No. 2 at reconditioning after pretty much zero physical activity since a local mid-December jumper show.

A week’s vacation for me in April followed by two weeks of visitors in town that month made it an even slower road to fitness, leaving us behind the eight-ball for our goal, a novice horse trial (dressage, cross-country and stadium jumping) on Memorial Day weekend. 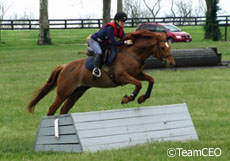 Our first lesson back, Zephyr decided his feet were sore, so we abandoned ship. We did manage to get in a couple of lessons, however, including a fun day of cross-country schooling at the Kentucky Horse Park, where he decided all that fresh air in his brain meant it was time to run and buck!

I decided to enter an early-May combined test (dressage & stadium jumping) to help tune up for the big show later in the month. It promised to be particularly fun since a ton of friends and co-workers who ride would also be there competing.

Although we finished off last year going novice, I entered the show in both beginner novice and novice to help ramp us back up. The boy arrived at the showgrounds cool as a cucumber, as usual. He hacked up the long hillside to the warm-up area like an old cow pony, ridden on the buckle. Once I picked up the reins, however, it was another story. After the first light-speed trot circle, the smallest brush from my leg became a cue to leap into a feisty gallop. “Oh, no…” I thought. I was really in for it. With four rides that day, I didn’t want to just let him gallop around and use up all of his energy. So, we tried our best to stay calm and just get through the first dressage test. I’ll spare you the scores unless you want to commiserate over details. What I can tell you is that instead of a desirable, “round” topline, he resembled a flagpole–nose pointing straight up in the air. Somehow, I don’t think that’s what Xenophon had in mind.

We did, however, achieve our last-minute amended goal of staying in the ring and doing something close enough to a test to get a score and continue on to jumping.

An hour and 20 minutes later was my novice dressage test. There was a bit of a power struggle in the warm-up again, but this time it worked out much better since the early adrenaline had worn off. In the ring, I let him be as pokey and relaxed as he wanted to, and was rewarded with our first 8 on an individual movement (for a trot diagonal).

Two hours later was our first show jump round. The course was set at 2’7″ for beginner novice, but it looked reasonable. A string fence was staked on a grassy hillside that had received some rain the day before, but footing was holding up. After a positive warm-up alongside some girls from the barn, Zephyr put on a perfect round–I was so proud! Of course we didn’t ribbon after the dressage disaster, but that’s OK.

By the time the saddle went on for the fourth time that day, we were both starting to feel pretty worn out. The 3′ oxer in the warm-up ring looked gigantic, requiring an uphill approach. The first time I asked Zephyr to jump it, I could tell he was thinking, “What the heck?!” Nevertheless, he jumped it. The second time was much better. I didn’t want to overdo it, so we were ready for our round.

Going in, I had an unusual case of the butterflies. The first jump faced the in-gate, so it was easy enough, but turning away was a struggle. Next it was down the hill through a combination that had sent me flying off during a refusal at the second element in 2003–talk about unpleasant flashbacks! We made it through–even if some of the jumps were more reminiscent of a wild stag than a seasoned show horse (unusual for my lazy poke)–to jump 7a.

There I saw a chip stride where there was none, and he had no room left to jump when he obligingly added the stride, so we came to a stop that was completely my fault. The second attempt through 7a and 7b went well, but then he stopped badly at 8. It was a dark, solid-looking panel oxer that hadn’t been on the beginner novice course. I gritted my teeth and we got over on the second try.

Then it was back up the hill to fence 9, a fearsome, max height white and yellow oxer. I galloped for all I was worth and he leapt high enough to clear it twice over; I was surprised to land in the tack at all on the other side. From there it was a very quick, sharp turn to the last fence that I completely blew because I was so excited to have made it over 9 in one piece. So, that was the end of our day.

Watching the training and prelim riders later on, I saw many stops at the paneled oxer (fence 8). That is somewhat unusual for a show jumping course, so I decided to focus on the positive and chalk it up to “not our day,” and a bit too early in the season for us to be prepared for a challenging course.

I still love show season, and can’t wait to see what other adventures we will have when cross-country is added back to the mix! It’s definitely Zephyr’s best phase. Ditches, banks and water … oh my!

Back to The Near Side >>