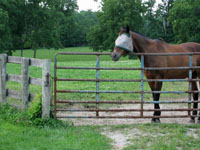 Mirkos was recently moved to a new pasture after his herdmates left him with one too many hairless patches of skin. I urged him several times in the past to stick up for himself, but as the low man on the totem pole, I guess there’s not much he could do.

I’m not sure Mirkos is too thrilled about being in his own pasture because he eagerly approaches me at the gate; he never did this when he was in the other pasture.

While I feel terrible that he is a little lonely–there are three horses just over the fence, but I know it’s not the same–I have to be honest about the fact that I love not having to walk 15 to 30 miles (OK a bit of an exaggeration) to drag him out of the much larger pasture. Hopefully he will have a new friend soon.

So, on to our next misadventure: As I led Mirkos in from his new pasture one afternoon, I heard the telltale sound of a loose shoe. When we reached the driveway, I realized he had already lost the other one (he only has shoes on his front feet). The left front was hanging on by three nails. I attempted to pull it myself, but I didn’t feel comfortable doing that, so I had to call in the barn manager, who yanked it out in one swift motion. I have taken that shoe and plan to decorate it as a keepsake. Stay tuned for the final results, which hopefully you can use to create your own memento of your horse.