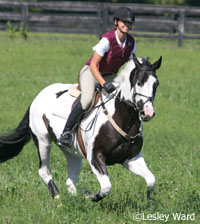 Yesterday, I had the opportunity to take a lesson on a horse I’d never ridden before, Bosco (pictured, although that’s not me riding him).

After a long, arduous year of disappointing shows, I’ve come to the realization that Zephyr just doesn’t want to be an eventer. His dressage scores are always the worst in the pack, regardless of how many hours of training we put in. Lately he’s gotten so fired up in the jumping warm-ups that he’s become hard to control out on course as well. He doesn’t that at home, so it’s not a physical problem or one that can be trained away—he just doesn’t want to event.

Luckily, he’s a super horse for beginners to ride … they aren’t as demanding on him as I am! He’s bombproof packing around cross-rails and trail riding. Eventually my husband might take over his care, or I will lease him out. The idea of selling is just too difficult, since I’ve had him for 8 years, ever since he was a baby off the track.

So I have been thinking about looking for a new horse. It’s both exciting and scary. What if the new horse goes lame? Zephyr has been the soundest horse I’ve ever seen. What if I buy one and it also turns out to be unsuitable for eventing? It’s very difficult to find the right combination of a quiet, steady dressage temperament and a bold, powerful cross-country jumper. I’m most interested in Thoroughbreds, so that’s where my search will begin—and fortunately, Kentucky has lots of Thoroughbreds for sale coming off the track, some of them with retraining already in place.

Anyway, I decided to start riding other horses in my lessons to prepare for having a new mount for the first time in 8 years. Before I had Zephyr, I exercised about 12 different fox hunters, and then groomed and exercised for a stable of 10 different event horses, so I’ve had a lot of challenging and fun rides over the years—but it’s been a while!

To my excitement, my trainer, Megan, put me on Bosco—her flashy, confident black and white Paint Horse/Thoroughbred cross that currently shows at the same level as Zephyr (with much greater success, I might add!). It was such as blast to ride him. He’s opposite of what I’m used to in every way; instead of looking for ways to get out of working, he loves to work! He’s so honest, he’ll go over any jump you point him at, even if you mess up. What a fun guy. He just bounces along with enthusiasm, asking, “What are we jumping next? Huh? Huh?” I’ll probably ride some others soon, too—but for now, I want to thank Megan and Bosco for showing me how much fun it is to ride a horse that LOVES his job.