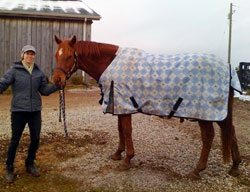 I recently purchased a couple of new turnout blankets for Dexter and Zephyr, since the old rugs were A) totally devoid of all waterproofing and therefore acted more like a sponge; and B) torn to shreds and sit horribly on the shoulder so as to create rubs.

It was exciting to come across an industrial-strength (1200 denier) turnout on clearance one day, so I immediately snapped it up, not paying much attention to the fact that it was blue argyle. Although I’m a noted argylephile, purchasing everything from socks to sweaters in the famously preppy pattern, all that mattered in terms of the blanket were that it was the right size and the shipping was free.

As I pulled it out of the box and brought it out to the barn, I noted that it had an awful lot of white for something worn by horses, which is literally made to be dragged through the mud. Still, that didn’t really bother me.

It’s been two weeks now, and the blanket has stayed amazingly clean. I’m beginning to be convinced that it’s coated in some sort of magic Teflon that repels every trace of dirt.

Besides that, I’ve also had what seems like a million comments and compliments on it around the barn. “Zephyr is looking sharp in that argyle!”… etc. I’ve never had someone comment on a turnout blanket before, so I suppose it’s humorous that this one has attracted so much attention.

As you can see from the photo, taken on a muddy Sunday afternoon, even though his hooves and my feet are coated in the mire, the blanket remains quite clean, even on a noted piglet of a horse.