Yesterday was the big vet clinic at the farm where I board Dexter and Zephyr. That meant approximately 40 horses received a battery of shots and pokes to the vein for their Coggins tests. Frigid temps didn’t slow down our vet, who brought at least three assistants (that I could count) to zip around, flipping through charts, lining up the horses and drawing up syringes from the appropriate vials of vaccines.

First on deck was Dexter. Actually, he was already on deck for his third attempt at getting shoes in the last three weeks. On the first try (he’d never been seen by my farrier before), he decided to revisit an old, fearful memory and try to flip over when it came time to have his shoes pulled. The shoes made it off, but that was about it. The following week, we did some more work with him, and additional trimming and rasping was completed, but it was clear that a nice little horsey cocktail would be necessary to get shoes back on his feet. He seemed especially panicked—not mean or aggressive, just genuinely scared—when the farrier tried to pull his front leg forward to get his foot on the stand.

So it was a nice coincidence that the vet arrived right as I was meeting the farrier this week. He came over, listened to the problem, and went to mix up an appropriate amount of anti-anxiety juice that would still enable Dexter to remember that what were doing wasn’t so bad.

All in all, it worked pretty well. He still didn’t want his foot on the stand, so my poor farrier had to clinch the nails with the hoof on the ground and/or held as if picking the hoof. Lots of homework for me, but we’re both committed to patiently showing Dexter he has nothing to worry about if someone wants to pull his leg forward for a moment. Fortunately, the vet also gave him his shots while he was “under the influence.”

After that, it was a brief period of jumping jacks to keep warm in the 20-something degree air while awaiting my next horse’s order of go for vaccinations. (Why is it that no matter how many layers, scarves, gloves, hoods, etc. you load on, there’s a temperature threshold where nothing can help you?) Zephyr was a bit of a baby, as usual, but as long as there’s no intranasal flu mist going up his nose, he’s fairly cooperative about being stuck.

Here’s a recent photo of the snowy farm and two Thoroughbreds making a pinto sandwich (Zephyr on the left, Dexter on the right). 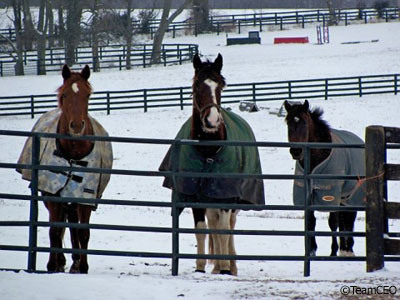