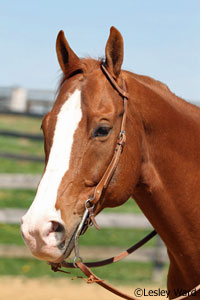 I had my very first western riding lesson yesterday! I’ve been a dressage rider from day one, with a little jumping education thrown in here and there, but I’ve always been interested in trying western riding, or stock seat.

My trusty steed, who tended to take the slow and steady aspect of western riding a little too far, was Duke, an approximately 10-year-old chestnut Quarter Horse. An accomplished ex-show horse, Duke was well-mannered and I never once felt insecure about him. My instructor was Bennie Sargent, 2006 AQHA Horseman of the Year, who has trained multiple world champions. He’s been a trainer for more than 30 years and a judge for more than 10 years. I feel honored to have been able to take a lesson with him!

Duke and I started on the longeline. I learned to use only a few commands: “cluck” for go, “easy” to ask for a downward transition, and “whoa” to, obviously, stop. Bennie told me that he only teaches his horses these commands (he doesn’t actually say “walk,” “jog,” or “lope” to get those gaits) because when the judges ask for the gaits in the show pen, horses that have been taught to execute a gait upon hearing the word tend to anticipate.

When I saddled up, the commands remained the same (adding the leg aid for forward cues and upward transitions of course). However, when it came to stopping, instead of using my seat and hands, all I needed to do was say “whoa.” If Duke didn’t respond right away, then I would use my other aids to make him stop. If I wanted to lope, I had to bring Duke down to the walk first. Bennie said that this is also to keep his horses from anticipating the lope when they’re jogging.

Proper body position is no different in a western saddle than it is in an English saddle, but instead of going with the horse’s movement, I had to keep my body totally still, including my arms (since western horses are ridden on a long rein, there is no need to follow the motion with the hands and arms as in English riding). It was difficult at first, especially in the canter (Oops! I mean lope), but I really think I got the hang of it toward the end of the lesson.

Speaking of reins, it was strange holding them both in one hand! I started out riding two-handed and eventually held both in my left hand while holding my right arm at my side, elbow bent and hand level with the saddle horn. I thought I would have a hard time with it, but after a few minutes, it felt just fine.

The only other awkward feeling was going slow! For years, I’ve had “more forward!” ingrained in my head. On Duke, even though he was going the correct speed (when he wasn’t actually going too slow), I constantly felt like I needed to keep driving him forward.

Other than working on my usual bad habits–keeping my heels down and not letting the reins slip through my fingers–plus increasing my leg strength (boy are they weak from not riding!), I think I did really well in my first lesson. I’m really excited to have more in the future. Part of me feels like maybe I was meant to be a western rider from the beginning, but I guess we’ll see about that!