While waiting for Dexter to recover from his abscess, I recently had a chance to borrow a wonderful horse for a lesson. Basil is an Oldenburg/Thoroughbred cross who competed in a long-format CCI* last year at the age of only 7. This particular one-star is a Preliminary-level event with steeplechase and roads & tracks before the cross-country course begins. According to his rider, he finished with tons of gas left in the tank!

Needless to say, it was very exciting to ride such a horse. His sire has produced several Grand Prix show jumpers, and he definitely has phenomenal talent in that department. As the bar went up, it still felt like nothing to him! For me, on the other hand, it was a bit of an adjustment from what I’m used to. I haven’t done “big” jumps (much over 3 feet) in at least 8 years, and my pride in having a good release went right out the window as I weebled and wobbled through the air for what seemed like minutes over a large jump. Toward the end, I finally got the feel for what to do, but it was like learning all over again. I’m always up for a riding challenge though, and the adrenaline junkie in me (hey, I’m an eventer after all) had no hesitation about giving it a go.

At the end of the lesson, I asked my trainer how big the jump was – I just had to know! She measured and said it was 3’10”, which topped my old record (set many years ago in high school) of 3’9″. We were out at the barn the next day doing a photo shoot, so Lesley took this picture of me next to the jump, which was still up from the night before. 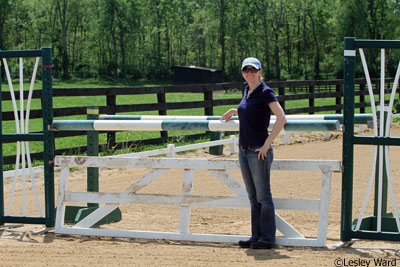 I would encourage any of you who have ever wanted to jump to give it a try. But always stick to the small stuff until you have a secure and independent position. Nothing will shake your confidence like over-facing yourself too soon, and having a bad stop and/or fall. A fall I took early on in my riding career took at least two years to recover from in terms of confidence – and it was entirely my fault, as I was jumping with a friend without my trainer present, and tried a jump it was probably obvious I shouldn’t have.