After a rough spring with a pesky, persistent abscess, I was finally able to show Dexter last weekend for the first time since buying him in November 2009. After recently selling Zephyr to a lovely family with a young daughter, I had more time to focus on Dexter and get him fit. My husband, Phil, has also been riding him and wanted to enter the show–his first one!

Since the show was a “mini-trial,” it meant we had to do dressage, cross-country and stadium jumping in the same day. With both Phil and I riding, that meant six rides for Dexter! Good thing he is so fit. Phil rode in a walk-trot dressage test, small log cross-country course, and cross-rail stadium course. He did a fantastic job!

After a steady dressage test, Dexter and I were tied for third. Cross-country went very well, and he jumped smoothly and galloped comfortably around. We moved up to second. The rider ahead of me went first in stadium jumping, and had one rail down. Since I was less than a point off the lead, that meant if I left all the rails up, I would win. I tried not to think about that because it made me so nervous. After all, the last time I won a blue ribbon was more than 15 years ago, when I did hunter shows. Yikes! 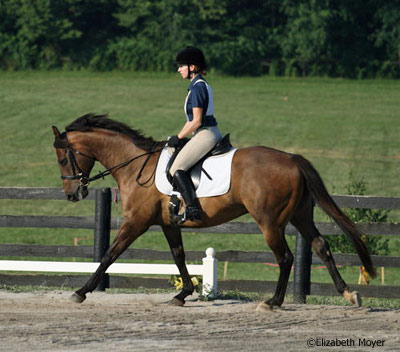 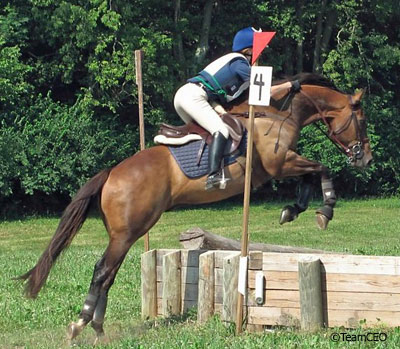 I tried to wake up Dexter as we came into the ring, since it was such a hot afternoon and he’d done a lot already. Our round was going pretty smoothly until the last jump–we came in off a sharp turn, leaving little time to see a stride. I quickly evaluated that I could either add a tiny stride and take down some rails, or leave really long and try to make it across the oxer. I gave him a big squeeze with my legs for the earlier takeoff, and probably closed my eyes the whole time. But he made it over from the impossible distance! What a good boy! 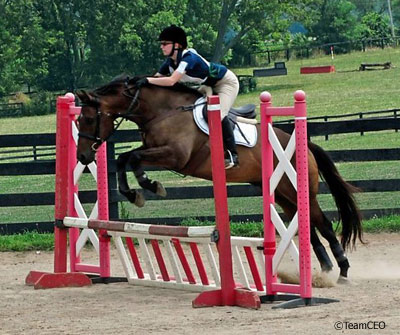 Getting the blue ribbon kind of put me into shock–I couldn’t really even process it. Eventing is SUCH a hard sport–after working my tail off, I’ve gotten plenty of seconds, thirds, fourths, etc., but hadn’t yet nabbed that elusive blue. Needless to say, Dexter got a lot of carrots that day. We also got a medal for “best cross-country ride” in my division, which might have been an even bigger honor! After all, cross-country riding is the reason most eventers event. If they liked dressage best, they’d probably be dressage riders. If they liked show jumping best, they’d be show jumpers. Galloping through open terrain over solid jumps is what us crazy adrenaline-junkie eventers love to do. 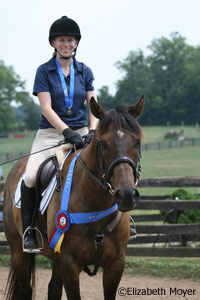 Do you event? Would you ever try it? Click “submit a comment” below and let us know.