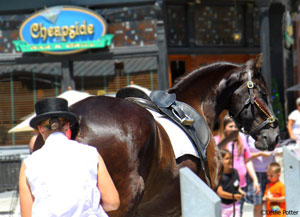 This horse stood patiently in the center of downtown Lexington while crowds swarmed around him. Would your horse do that?

We recently ran a poll here on HorseChannel asking visitors if their town is horse-friendly. About 18% of you said yes while nearly 50% picked “not at all.”

If you live somewhere urban, this is a no-brainer. Most cities and developed towns don’t even have zoning for horses, and car-filled city streets are no place for recreational riding. However, I’d argue that rural areas aren’t always ideal, either.

Horse Illustrated HQ is located in Lexington, KY, the Horse Capital of the World. My horse and I both live within city limits. I live near the center of the city, where the constant traffic, emergency vehicle sirens and road construction projects would undoubtedly make my horse’s head explode. Snoopy lives at a boarding stable on the far reaches of the city in a very equestrian area. However, the roads in these rural areas of Lexington are narrow and twisting and tend to have either banks or ditches on the side, leaving no space for a horse. Besides that, while most drivers are careful and courteous, there are enough yahoos out there using rural roads as the Autobahn to keep me away.

When I used to work at a barn in a small, coastal Maine town, I’d occasionally take Snoopy out on a stretch of road. It was a short stretch between the end of one of our preferred trails and the driveway back to the barn. There was a wide enough shoulder that I didn’t have to worry about traffic too much. The area around the farm was largely populated by summer residents from Boston and New York, and while you might think the city-dwellers would lack horse sense, they actually tended to slow way down and give us a wider berth than necessary. I think seeing a horse on the road probably seemed quaint and charming, and isn’t “quaint and charming” precisely what people look for when they spend the summer in coastal Maine?

The one issue I had at that location was when we encountered some bicyclists as we exited the trail onto the road. Snoopy’s not too scared of cars, but bikes are another story. The bicyclists meant no harm of course. In fact, one of them commented on how beautiful Snoopy was as they rode past.

“Thanks,” I replied as I tried to prevent him from spinning and bolting.

A friend of mine had a bit of a harrowing experience courtesy of a cyclist. She was riding her Belgian gelding down a small-town road and a cyclist reached out to touch the horse as he rode past. The horse was not expecting this and spooked, ending up in the ditch on the side of the road. Luckily everyone was okay, but it could have been much worse. This cyclist may not have meant any harm, but probably didn’t stop and think that his actions would cause a reaction from the horse.

These days, it’s pretty established practice to teach your children to ask before petting a strange dog, but somehow that logic doesn’t seem to transfer to interactions with horses. Maybe it’s because most people are only exposed to pony ride ponies or police horses that are conditioned to be calm around the public. Maybe it’s because most people aren’t exposed to equines at all.

If you ride on public roads or trails, how have your experiences been? Have you had to educate anyone on how to approach your horse? Have people been willing to listen? Share your thoughts by clicking “Submit a Comment” below.