Now that we’ve had a few days to recover from the madness of 16 days of the World Equestrian Games, I’m going to share a few thoughts that just didn’t fit into our regular coverage of the events.

-If there was one horse who stole my heart during the WEG, it was Fuego XII, the PRE from Spain. That aptly-named horse put all his energy into every step. His rider, Juan Manuel Muñoz Diaz, rode his freestyle for the crowd, even encouraging cheering from the audience. I think he probably knew that Moorlands Totilas had clinched the gold just by showing up, but if you can’t win over the judges, win the crowd. And he did. It was a wall of sound at the end as the crowd stood and cheered for Fuego and Juan Manuel at the end of their freestyle, followed by unbridled booing and jeering when the pair’s scores came up on the jumbotron. Scores in the 70s? Not what we wanted to see, judges!

Thanks to one HorseChannel visitor who caught this freestyle on video, you can watch it here.

And Sr. Muñoz Diaz, if you’re looking for a working student, call me. 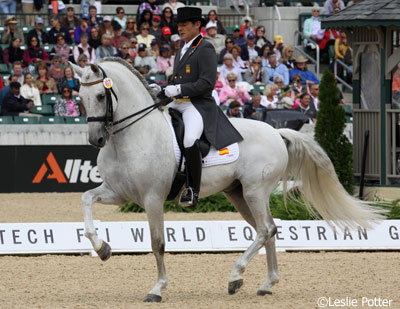 Fuego XII and Juan Manuel Muñoz Diaz on their way to winning the people’s choice awards. Sadly, there’s no medal for that.

-If there was a second horse who stole my heart during the WEG, it was Sapphire. How can you not love that mare? She’s not the prettiest horse in the world, but she does her job and makes it look so easy, it’s like she doesn’t even have to try. She’s so laid back about it, like, “Oh, hey, there’s another 5-foot jump. Let me just clear that real quick, and now I’m going to go have a nap.”

So, Mr. Ward, whenever you’re ready to retire her to an amateur adult who will just take her over little wimpy jumps and feed her lots of carrots, call me. 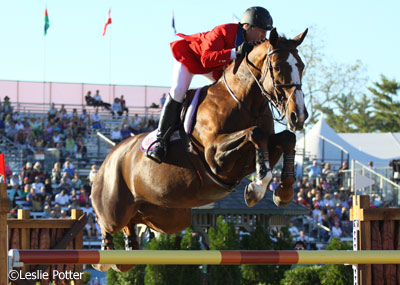 -I found a miracle diet, and it’s called WEG. I love the Kentucky Horse Park, but it is quite spread out. And while I understand that inflated food prices are par for the course with all sporting events, concerts, etc., WEG food prices were, well, super inflated. It’s not like the food was even that great, in my opinion. Between hiking miles every day to get from one venue to the next, and not eating much because there are only so many times you can drop a huge wad of cash for a questionable-looking salad, I lost a few pounds without even trying! Just in time to head into the Halloween/Thanksgiving/Christmas/too-cold-to-go-for-a-run time of year. Thanks, WEG!

-The most effective marketing gimmick I’ve ever seen had to be the NRHA’s Ride a Reiner. I’m a recovering saddle seat rider trying to become a hunter/jumper rider with an ongoing interest in dressage and eventing. But after I rode a reiner at WEG, I’m ready to put on a pair of cowboy boots and a big ol’ belt buckle and switch to the western side. Who knew I had an inner cowgirl? Not only that, but I talked about it to anyone who would listen for days afterwards. So now, I think my next horse will be a reiner. But a reiner that also jumps.

-The Australians have, by far, the best cheering section. They didn’t have the biggest numbers since not too many people are willing and able to travel halfway around the globe to watch the horses. But the ones that did show up knew how to bring it. Any time an Australian competitor in any discipline entered the ring, someone would initiate the Australians’ trademark chant, yelling, “Aussie! Aussie! Aussie!” This was returned with a chorus of, “Oi! Oi! Oi!” I applaud their spirit, although I enjoyed it less when the initiator of this chant happened to be standing next to my right ear at one of the combined driving hazards when an Australian competitor came through. The doctors say I should recover 80% of my hearing, though, so it’s all good. 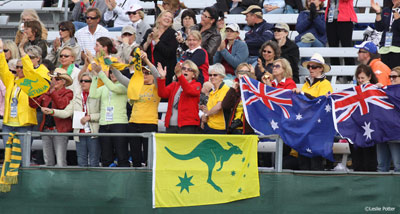 Aussie pride at the dressage stadium. Not your average dressage fans.

-I loved seeing Stacy Westfall in the opening ceremonies and in the reining freestyle exhibition. But why wasn’t she on the team? Granted, the U.S. team did just fine as it was, but it would have been nice to see more cowgirls from any and all countries kicking up dirt out there. This goes double for combined driving. There were only two women out of 25 drivers. Where are ya, ladies? 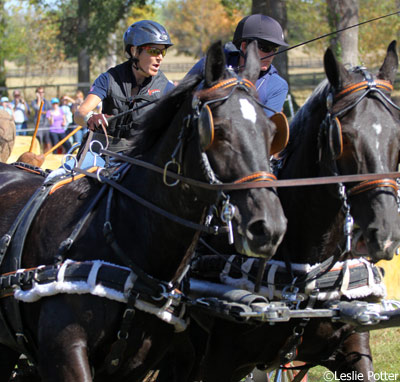 American Cindy O’Reilly was one of only two women competing in combined driving (the other was Canadian Deborah Laderoute.) O’Reilly drove a team of Percheron/TB mares.

Hopefully some of you were able to visit the WEG here in Kentucky, or at least caught some of the TV coverage. Now we’ve got four years to rest up and learn French before the 2014 games in Normandy!