After one of the snowiest winters in Kentucky’s history, most horses around here are pretty rusty. It was definitely a challenge to keep horses going through December and January, and most ended up having extended vacations. Thankfully February was more cooperative. Through it all, I tried my best to keep my semi-new partner, Dexter, in baseline fitness.

We had a “practice” show the last weekend in March, and after a week of temperatures in the mid to upper 70s in mid-March, a quick plummet preceded show day just in time for a high of 37 with blustery winds all day. I had thermals under my show clothes and a big jacket and gloves on right up until it was time to go into the ring … that was a bit of a change from the summertime shows we’re used to. Luckily Dexter seemed to take it all in stride. He’s been an absolute angel at everything I’ve asked him to do, which is an incredible feeling. 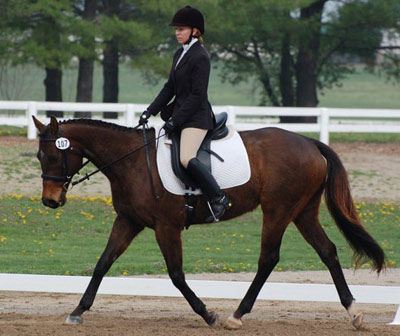 The second weekend in April (two weeks after the March show), I had my first “real” event at Spring Bay Horse Trials. The wacky weather continued, with an enormous thunderstorm that lasted for hours rolling in after my dressage test. Thankfully it stopped before I had stadium jumping, but the ring was a swampy mess, as you can see from the photo. 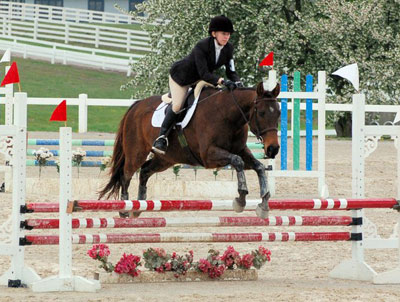 Cross-country was held that Sunday, and a heat wave rolled in to bring record highs in the mid to upper 80s! We were all sweating, but I must say it was a very welcome change, even if my furry horse seemed a bit confused by the temperatures. 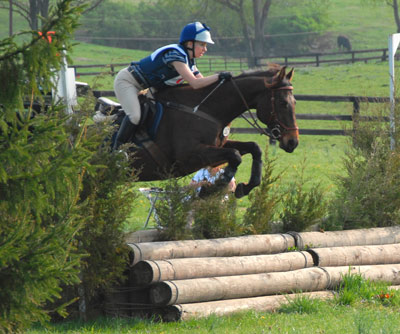 In any case, it was a great early-season course, with just enough challenge while still being safe for rusty horses and riders. I let Dexter cruise along a hair slower than normal since the footing was deep in places from all the rain. He was a superstar over all the jumps, and took them right in stride. It was a blast!

After so many years of struggle in this sport, all I can say is I don’t take one iota of it for granted when things go well. You can topple so fast (both physically and figuratively) that it is truly humbling. Any ribbon is a prize to be celebrated! We ended up finishing in 3rd place out of 16 in our Novice division.

It will probably be a couple of months until our next show, but that will be time well spent schooling and getting better conditioned. The ultimate goal is to move up to Training level, so we need to be as ready as possible.

Happy spring to you all, hopefully it’s warming up and turning green where you are after all this cold misery!