On Thursday afternoon I also had a wonderful opportunity to “ride the cross-country course” with a small group of media in a mounted course walk hosted by David O’Connor, Olympic gold medalist and future U.S. eventing team coach, as well as Olympic eventer Bobby Costello. We rode western aboard some horses from the Kentucky Horse Park’s trail string, and I have to admit the whole thing seemed rather humorous. Seeing eventing icons slowly ambling along riding stout, shaggy Appaloosas in western tack was a lot to wrap the mind around. 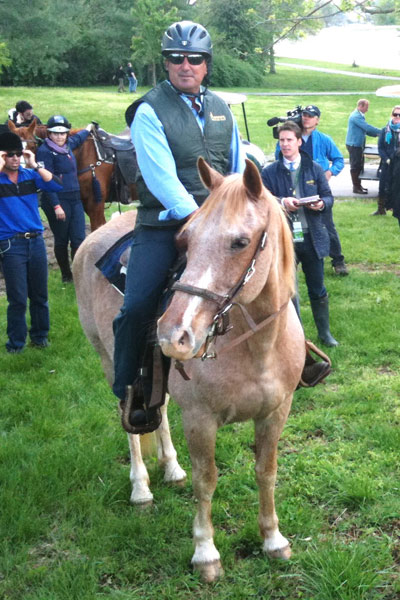 David O’Connor and his new mount

Karen O’Connor came with us on foot as far as the famed Head of the Lake water complex, but it was so full it almost flooded her Dubarry tall boots (normally the water is 6 to 8 inches deep). We continued along, crossing impromptu streams throughout the course, as well as negotiating plenty of mud. (Don’t worry–we kept off the roped lanes that the riders will use to get from jump to jump.) I think the horses were excited to be off their usual trails, because they all seemed pretty perky. My spotted vehicle, Commanche, was a well-behaved citizen other than occasionally trying to snack on the grass, but who could blame him?

At the coffin complex (#7abc, the Bridgestone Park Question) recently installed for the Alltech FEI World Equestrian Games last fall, which Springer had predicted would be “influential,” we saw an unexpected sight. Actually, we didn’t see an expected sight. The ditch was completely invisible under a raging river that wasn’t supposed to be there. A generator-powered pump was furiously working to remove the water, but more was pouring in at such a rate that things looked dubious. Although it’s supposed to be dry all day Friday, O’Connor had his doubts that would be enough time. “Horses would probably just jump the water, but they won’t want to take the risk of a horse going into the water [and falling in the ditch]; they’ll take this off the course if they can’t get the water out,” he predicted. Stay tuned for the the verdict on Saturday! 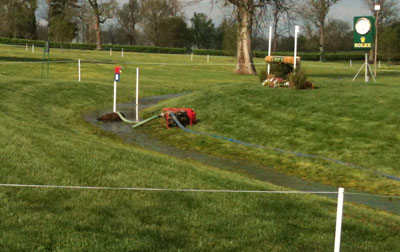 The newest water jump on the Rolex course

For more information and updated scores, go to www.rk3de.org