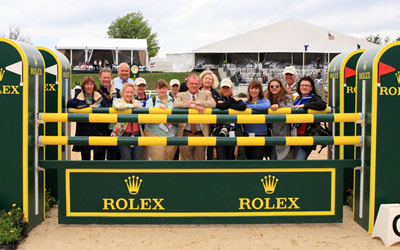 On Sunday morning, May 1, 2011, the media had a special invitation to walk the Rolex Kentucky Three-Day Event show jumping course with its famed designer, Richard Jeffery. Snappily dressed, as the British are known for, he patiently answered questions and told us about the course’s winding design.

Jeffery has been in this business a long time, and designed both the eventing show jump course and the “pure” show jumpers’ courses for the 2010 Alltech FEI World Equestrian Games last fall. Those were held in the same arena as Rolex at the Kentucky Horse Park in Lexington, Ky. Later this year, he will design the show jumping course for the four-star Burghley Horse Trials in England.

As we walked the course with Jeffery, we kept running into competitors walking their lines—but don’t worry, we stayed out of their way. Karen O’Connor approached to ask him if the jumbotron would have scores or live video feed (which is spookier to the horses); he told her he’d just gotten word that it would be live video. Other competitors seemed worried about that as well. Boyd Martin, William Fox-Pitt and other legends of the sport zig-zagged back and forth across the ring, intensely focused on how they would approach each fence, as well as coaching other riders.

As a (lower-level) eventer myself, I know that feeling of trying to memorize your course, walk the striding, and figure out how to give your specific horse the best ride possible. It’s a lot to think about! Mostly I was just awed by the size of the jumps; the oxers in particular were somewhere in the neighborhood of 5 or 6 feet wide (the jump height is a maximum of 4’1″ at the four-star level). That is a lot to jump after your horse just finished an 11-minute cross-country course over solid obstacles of even larger dimensions the day before!

Show jumping in eventing is not designed to test the fastest or highest jumper, as it is in Grand Prix show jumping, but rather to see if your horse has enough stamina left over after the previous day’s challenge to jump carefully. Each rail adds 4 points to the rider’s penalty score (lowest score wins, as in golf), and there are time penalties for exceeding the time allowed.

Mary King of Great Britain, who was in first and second on her two horses after cross-country, proved true mastery of the sport by jumping double-clear on both horses on Sunday to clinch first and second place at Rolex 2011—no easy feat!