Singer Sheryl Crow recently announced that she would be donating part of the proceeds from an upcoming concert to The Cloud Foundation. Crow has long been a supporter of the Mustang advocacy group and she’s putting her money where her mouth is to help the cause of blocking a large-scale BLM roundup in Nevada. So why are other animal welfare advocates angry with her?

The tour stop from which Crow will be donating a portion of her ticket sales is the Cheyenne Frontier Days Rodeo in Wyoming. A few years ago, members of SHowing Animals Respect and Kindness (SHARK) publicized video footage of horses being shocked with 5000 volts to the neck with a device known as a “Hot Shot.” Such devices aren’t banned by the Professional Rodeo Cowboys Association, but they are only to be used on the hindquarters or shoulders if a horse or bull stalls. Crow’s pledge to donate proceeds to The Cloud Foundation came about as an attempt to placate fans who were angered by her playing at this venue.

This situation raises two questions. First, how much responsibility and how much clout do celebrities have when it comes to these issues? Willie Nelson has also spoken out against wild horse roundups and horse slaughter in general. Lea Michele (a.k.a. that chick from Glee) participated in a campaign against the use of carriage horses in New York City. Michael Douglas thinks that you should nominate someone for the FEI Awards (I still can’t figure that one out.) Do we care? Should we care? Everyone has opinions, and I suppose when you become uber-famous you realize that a whole lot of people are listening to what you have to say, so why not be vocal about what you believe in, even if you’re no more an expert on the topic than any schmo on the street?

In Crow’s case, she isn’t all talk. She’s long been a wild horse advocate and is (was?) a horse owner herself. She even donated her Tennessee Walking Horse mare, Lady C, to the anti-soring group Friends of Sound Horses. However, by taking that public stand on horse welfare issues, I think she’s more accountable for her decision in this case. Look at it this way: She’s touring with Kid Rock (no accounting for taste, but that’s not the issue here.) I’ve never heard Kid Rock take a stand on animal welfare issues, so when I find out he’s performing at a rodeo where horses have been zapped in the neck, I just shake my head and move on with life. When I hear that a supposed horse welfare advocate is doing the same, it seems much worse. It seems hypocritical.

The second issue is this odd disconnect I’ve noticed in the world of wild horse welfare. For whatever reason, there seem to be a lot of people who are deeply concerned with the land rights of Mustangs and actively opposed to any BLM interference with their wildness, and yet those same people don’t seem to take a whole lot of interest in the welfare of domestic horses. In my mind, we humans are more responsible for the animals we breed and raise on farms than the wild animals living on the rangelands out west. It’s not that I don’t think people should be concerned with wild horse welfare, I just think that we owe a lot more to the animals that we create. (Then again, why is my opinion any more valid than any random Hollywood celebrity?)

Is Sheryl Crow’s passion for wild horse welfare and apparent indifference to rodeo horse welfare a case of confused priorities? Like I said, she has owned horses and supports FOSH, so I don’t think that’s the case. Perhaps it’s just the she’s contractually obligated to do the scheduled tour dates. Maybe she’s just doing her job.

How much stock do you put in a celebrity’s opinions of horse welfare issues? What do you think of wild horse welfare vs. domestic horse welfare? Share your thoughts by clicking “Submit a Comment” below. 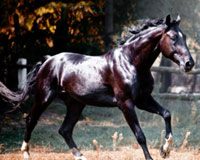 Do you have the world’s most beautiful horse in your barn?