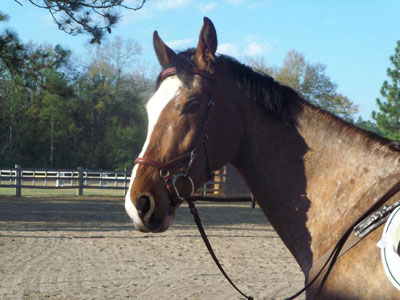 I can’t believe it’s been over a month since my last blog … so much has happened since then. First was the trip to Aiken, S.C., for a week with my trainer and people from the barn. This was definitely an “opportunity of a lifetime” type of trip for me. They’ve been going to Aiken every year since I moved to the barn, and I’d always wanted to go. So I decided last year to save money no matter what to make it happen!

It turned out to be the best thing I could have done. Even though Jester was only 40 days under saddle when we left, we’d thankfully mastered our steering, which really helped progress his walk/trot/canter work, and the week before we left, he had a lesson to learn how to jump cross-rails. A successful trip to the local equestrian park to see the great wide open with a friend, and we were about as ready to throw ourselves in the deep end as we ever would be!

Aiken was amazing. We stayed at a facility with a racetrack that we got to ride on the first day (just walking and trotting for me). Every day, we trailered to different venues to ride. Two of the days we went to Hitchcock Woods, a beautiful forest with trails and small steeplechase jumps perfect for a fun day on horseback. Three of the days we went to different cross-country schooling venues, where Jester learned how to go into water jumps and hop over tiny ditches and logs. He took it all in and seemed to love it! 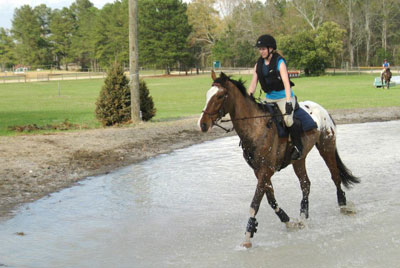 There was also a lot of window shopping and eating involved during the week, but probably my favorite day was the little show we went to. I entered the “Amoeba” division: a walk-trot dressage test followed by a long course of cross-rails in a grass field. I was worried about how he’d take it all in, having never done a test in a dressage ring or an entire course of jumps before, but once again Jester exceeded my expectations! He performed a steady and obedient test for a score of 33 (67%), and hopped right over all the brightly colored cross-rails like it was no big deal at all. Success!

After learning enough in Aiken to fill an entire season normally, we were back for two weeks before the first show of the year in Kentucky. Another combined test, I was entered in the smallest division. He was a little more excited in his dressage test this time around, probably because there were dozens of horses warming up for as far as the eye could see. But he still did a nice test for a score of 43, which is great considering he hasn’t learned to go on the bit yet! In jumping, the class that I thought would be cross-rails was in fact 2′ fences, all brightly painted and decorated with flower boxes, including three oxers! I was very nervous warming up, especially with the exciting atmosphere from all the horses zooming around. When it was time to go in the ring, Jester totally relaxed and jumped everything like it was easy-peasy. 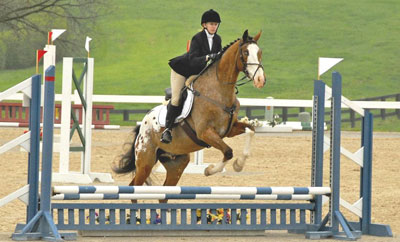 Of course, we still have a WHOLE lot left to learn, but I’m very happy with how my (not so) little 4-year-old is doing. We’ll probably take it easy for the rest of the spring and tackle another show or two this summer as we work on our dressage skills. I’m not as worried about cross-country, as that seems to come very naturally to him, and is certainly my favorite part of eventing.

I highly recommend taking your horse on vacation some time if you ever have a chance. Whether it’s camping and trail riding or a full week of training, you won’t have to miss your horse while you’re gone—and that’s the best kind of trip!