Once, in college, I jumped a couple of logs on the cross-country course on campus. A while back, the arena at the hunter/jumper barn where I rode was being dragged during my scheduled lesson, so we went out and practiced over some coops and brush fences, each measuring about 2’. Why, just last summer, Snoopy and I encountered a very small jump just sitting in the middle of the field at our boarding farm, so we trotted over it a few times.

And that, friends, pretty much sums up my cross-country riding experience.

So I never anticipated being able to see the Rolex cross-country course up close from a horse’s back, and yet, that’s exactly what happened on the first day of this year’s Rolex Kentucky Three-Day Event. I immediately added that to my equestrian bucket list and checked it off. 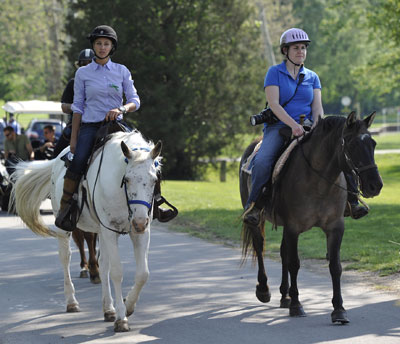 Gambler and I, on the right, looking as relaxed as a horse and rider ever have on the way to the Rolex cross-country course.

Since last year, Rolex has sponsored a course ride for journalists and photographers. If you’re a loyal reader of this blog, you may recall that Horse Illustrated Senior Associate Editor Holly Caccamise joined this media ride on its maiden voyage. This year, I won the coin toss. 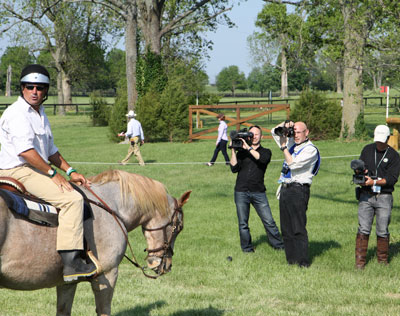 David O’Connor and his trusty steed…and some paparazzi.

We started our tour at the iconic Head of the Lake. While O’Connor explained some of the challenges of this year’s set up, I started taking mental notes. That is, until I noticed Gambler chewing on something red. He hadn’t even put his head down. When had he managed to find something to gnaw on? Then I realized it was his bit guard, and I watched it disappear from the left side of his mouth and reappear on the right.

What? Did I just spend this entire time watching my horse play with his tack while one of eventing’s living legends gave insights into one of eventing’s legendary questions? That was dumb. I promised to start paying closer attention.

Gambler and I brought up the rear of the group, and while we weren’t going faster than the speed of a walk, his preferred gait was a jigging jog. As we bounced toward the next stop on the tour, I started to wish I had a convenient little point-and-shoot camera instead of my heavy SLR. 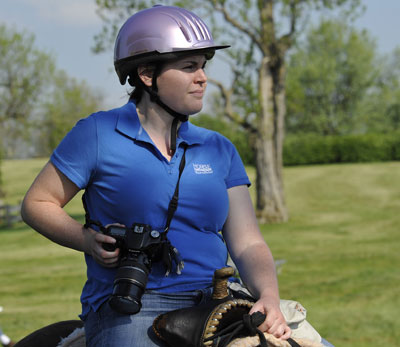 But don’t I look like such a pro with that heavy camera?

When we stopped, I was determined not to let the bruise on my hip caused by my bouncing camera be for nothing and took lots of photos of O’Connor and Miles as they, again, gave insights that I didn’t quite absorb.

Finally, we arrived at one of the course’s three water jumps and Gambler came to the realization that I wasn’t going to prevent him from grazing, and he at last stood still so I could give my full attention to O’Connor and Miles as they explained how they would tackle the question before us. 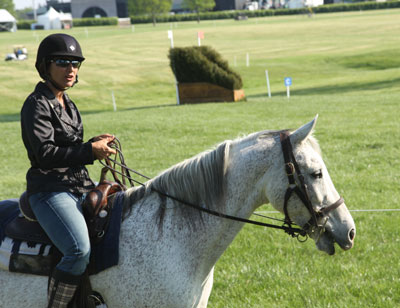 Gina Miles was not competing at Rolex this year, but she did compete in the Reining Freestyle World Championship across the park. I like to think this ride gave her a little extra practice time in a western saddle.

But let’s not kid ourselves. As a non-eventer, the nuances of each obstacle were pretty much lost on me. All I can tell you is yes, they are as big and scary-looking when you’re up close and on a horse’s back as they are from the ground, or even from the comfort of your own home while you’re watching the highlights on TV. If I hadn’t already been in awe of the riders who tackle this course each year, I certainly would be now.

I hope you did get to see some of the cross-country, whether watched from home or made it to the Horse Park to see it in person. If not, check out highlights at USEFNetwork.com or watch the helmet cam video from rider Doug Payne below. My perspective of the course looked a whole lot like his. I swear.