In June, I took my still-relatively-new horse Jester to his first recognized Beginner Novice horse trial. I thought his dressage test was alright, certainly the best he was capable of at that point as a green 4-year-old. He kept his cool, which is more than I can say for some horses I’ve shown in the dressage ring! Still, we were 16th out of 19 after dressage, and never really had a chance at a ribbon even with clean jumping rounds in cross-country and stadium.

That’s the tricky thing about eventing—you can be sitting on the best jumper in the world, but without a decent dressage score, your ribbon most often won’t reflect your pride in your horse. But that’s OK! You just learn to love the accomplishment, regardless of any ribbon. There’s always a story at the end of the weekend that includes the highest highs and the lowest lows—ALWAYS.

July 14 & 15, we entered in our second Beginner Novice together. Kentucky had had 0.1 inches of rain in the preceding 23 days—officially a big ol’ drought. Thursday, a bit of rain started. Friday, a lot more rain came pounding down. Saturday I rode dressage around lunch time, and although it was sunny, some dark clouds loomed on the horizon. I was happy with my test, feeling that it was just a touch better than last time. No ribbon was expected, I was just happy my horse was learning and doing his best. 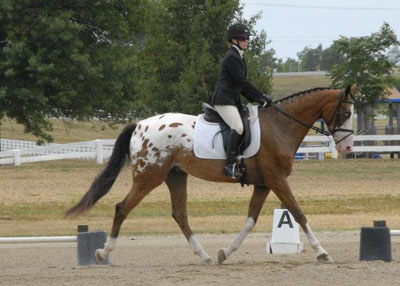 One hour later I was warming up for stadium jumping and saw dark rainclouds inching closer. I had the best warm-up fence ever, and zoomed down to the ring to try to go before the rain hit. I didn’t make it 5 feet before the skies opened up. Since the trailer was far away, I opted to huddle under some trees, which is actually not all that helpful when the rain is coming down like a bathtub faucet! Cross-country course designer and local four-star rider Cathy Weischoff comfortingly told me that she got knocked off her horse by the force from a nearby lightning bolt at a three-day event years ago.

They called a 30 minute rain delay, but I had nowhere to go but under the tree. Thankfully Jester didn’t spook at the thunder or rain. When they finally re-opened the ring, it was under several inches of water. We slogged out there and did our best—he jumped his heart out but had one rail down, which almost always takes away any hopes of a good placing at this level. However, everyone else had the same handicap, and rails were falling left and right. 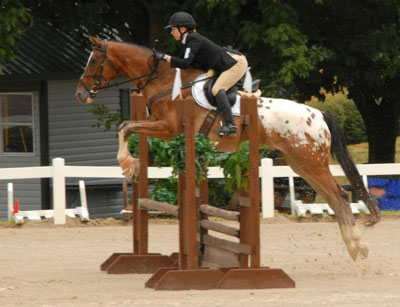 That night, I looked at the scores online. Something had to be wrong. It said I was in 2nd place out of 15. We’d been placed 2nd after dressage, and both the leader and I had a rail in stadium. I was certain something was wrong with the scoring, because that couldn’t be right!

Sunday morning was cross-country, and although the weather man had said rain would hold off until the afternoon, naturally it started pouring at 9 a.m. when I mounted to head to warm-up. It rained and rained, and he was slipping on the turns as we got ready. I discovered we could canter straight with no problems, so with my trainer’s advice to just take it easy on the turns, we set out on course.

Everything actually jumped really well except for one fence I didn’t quite give myself enough time to ramp up for off a sharp turn, but we got it done. I looked at my watch galloping for the finish line, and made it with only 1 second to spare!

As it turned out, the division leader had some time faults (very unusual at this level, but common over that weekend due to the wet footing). This moved us up to win the division! Holy cow. I’ve been eventing for 20 years (with the usual breaks for college, etc.) and this is my first time winning a recognized event. I was so proud of my big ol’ baby horse and how far he’s come in his training with the help of my awesome coach, Megan Moore, who also “matched” me up with him. 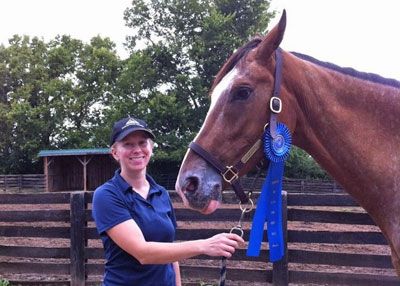 For now, I just plan to enjoy every moment and every ride with my horse. Ribbons are certainly not why eventers event … it’s about the bond you get from training your horse in three disciplines while keeping him fit and happy … and the smile on your face as you fly around a cross-country course, up and down the hills, through the trees, over logs, into the water … knowing your horse is having every bit as much fun as you are.