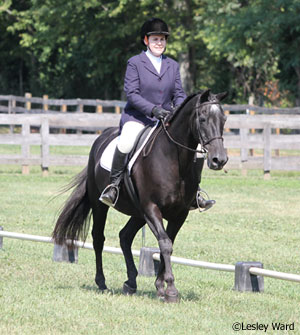 Snoopy kindly interrupted his busy schedule of grazing and napping to help me out with a couple of dressage tests last weekend. Photo: Lesley Ward

“I thought you retired your horse.”

I’ve been getting this a lot lately. Just about every time I mention that Snoopy and I competed last weekend, this is the reply I hear. However, this show was held at the farm where I board, and thanks to this blog, I have written proof that Snoopy’s retirement was from traveling, not competing. So there.

So how did the show go? Well, the funny thing about Snoopy is his multiple under-saddle personalities. At this point in his life, he’s usually lazy. I lovingly refer to his lazy personality as Sleepy McNapperhorse. However, he still has his days where something sets him off and I get a bit of a wild ride. This is Spooker Freakoutenstein. Earlier in the week, you would have seen Spooker and me at an unexpected dead gallop out on the trail or at a surprisingly energetic trot around the arena. I was optimistic that Spooker would stick around for the show since it is easier to manage a forward horse than one with no motivation whatsoever. Alas, on show day it was Sleepy who came to the ring with me. Our dressage tests came back with lots of “lacks impulsion” comments on them.

Nevertheless, he was very well-behaved and we received respectable scores and third and sixth-place ribbons for our efforts, and those look nice on Sleepy/Spooker’s stall door.

In the days leading up to the show, while questioning whether I could even memorize a simple intro-level test, I will admit that I wondered why I kept making poor Snoopy leave his comfy pasture and dance for the judges. He’s 24 now, and according to the American Morgan Horse Association’s database, he’s been showing since he was three (when he won second place at the Morgan Grand National, I’m proud to say, even though I had nothing to do with it.) I think there’s plenty of truth to the idea that staying active in some way is good for senior horses–and humans–provided they’re sound enough to do so. But why show? Couldn’t we just trail ride?

I have a friend who has a gelding approximately the same age as Snoopy, and she swears that competing keeps him young. I don’t know if that’s true of my old gelding, but during preparation for the show, I realized how a relaxed riding schedule with no particular agenda might not always be a good thing. Preparing for a dressage show meant breaking from my usual schedule of aimless hacking around the farm to occasionally set hoof in the ring to practice bending, leg yielding and control. Snoopy got a show trim, a full bath and his mane and tail detangled, and my tack, boots and brushes all got a thorough cleaning as well. It’s not that I never bathe Snoopy or clean my tack, but it doesn’t usually happen all at the same time. It’s kind of nice to have a reason to prioritize these things in my schedule and end up with a clean, shiny horse in his clean, shiny tack.

There are no more farm shows this year, so we’re back to our happy hacking for now. I don’t know if Snoopy and I will make an appearance in next year’s farm shows or not, but assuming he stays healthy and sound as he is now, I see no reason not to. Look for me and a 25-year-old Sleepy/Spooker/Snoopy tearing up the dressage arena again in 2013, even if only in our own backyard.