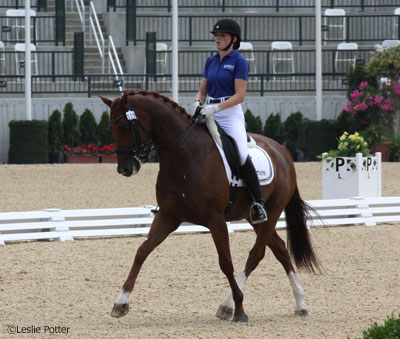 Dressage riders, like Madeline Birch at the North American Junior & Young Rider Championship, always look more elegant when they are not keeling over due to shadbelly-induced heat exhaustion. Photo: Leslie Potter

What if soccer players showed up for a game wearing khakis and blazers? Or football teams took to the field in top hats and three-piece suits? In most athletic endeavors, competitors wear clothes designed to keep them cool, prevent muscle fatigue, reduce wind resistance, etc. But in equestrian sports, the primary attire concern seems to be adhering to tradition, even when those traditions are archaic.

How many times has someone told you that riding isn’t a sport or riders aren’t athletes? It’s hard to defend our sport against those accusations when our top athletes do what they do in wool coats. This isn’t true across the board, of course. At some shows, jumpers wear short-sleeve polo shirts instead of jackets. Eventers, of course, wear the total barrage of safety gear on cross-country day. Western riders in reining and speed events wear jeans, cowboy boots and button-down shirts (usually) which may not be the coolest athletic attire, but at least it’s practical.

But then there are the other sports. Dressage riders and hunters wear those dark-colored, heavy jackets and shirts with tight collars that can feel pretty restrictive on a hot day. Saddle seat riders wear three-piece suits, complete with ties. Western pleasure and showmanship competitors wear fitted, glittery ensembles or blazers. Why? The answer is usually that it’s tradition. Tradition has its place, but if there were no set precedent for donning a heavy, formal jacket before heading out to ride a horse in the mid-summer heat, no one would ever do it. It’s just not a very smart thing to do. But since it’s what we’ve always done, we keep doing it.

Now, I understand the flip side. Yes, what we do is a sport, but there’s also a reason it’s called a horse show. It’s a show and needs to be treated as such. After all, ballroom dancers are doing something quite athletic and could probably do it better in sweatpants and athletic shoes. But the formalwear and high heels are part of the show. It wouldn’t be ballroom dancing if the participants looked like they just stepped out of the gym.

Maybe it’s time we found some middle ground. Manufacturers are finally making show coats in lightweight, technical fabrics. They’re taking some time to catch on here in North America, but I’m told they’re pretty popular in Europe. I was able to lay my hands on one at the World Equestrian Games trade fair in 2010. Compared with my own hunt coat, it felt so light and stretchy, like it would actually help you move with your horse instead of restricting you. Like it might not turn into an oven during a midday class in July. The price tag put an end to my daydreaming, but as these coats become more popular, I would expect more affordable versions will pop up.

Will the trend eventually seep into the American equestrian sports of saddle seat and western pleasure? I think it might, but it’ll take longer. There’s a million-dollar business idea for you.

Taking it a step further, what if we did away with coats altogether? The dressage riders at the North American Junior & Young Rider Championships wore their team’s polo shirts instead of the traditional coats or shadbellies, and personally, I thought it was an improvement. Sure, top hats and tails are elegant in their own way, but technical shirts and helmets made those riders look like athletes. It didn’t detract from the overall appearance at all, in my opinion. I hope it’s a trend that spreads.

What do you think? Is it more important for us to adhere to show-ring traditions, or should riders be allowed to dress like athletes? Click “Submit a Comment” below and let me know what you think.