One of my non-equestrian hobbies is running. In this case, by “hobby” I mean, “a thing I force myself to do on a regular basis because I know it’s good for me.” Despite being awarded the dubious title of “America’s Most Sedentary City” by the misinformed editorial staff of Men’s Health Magazine a couple of years ago, my adopted home city of Lexington, Kentucky has quite an active running community and a lot of fabulous places to put in some miles.

When it’s just me and the dog, I tend to stick to the area around my neighborhood or nearby urban parks, but sometimes I take advantage of that local running community by joining up with a group run. Those runs are often on the outskirts of Lexington where there is little traffic, lots of rolling hills to break your spirit challenge you, and unbeatable scenery. 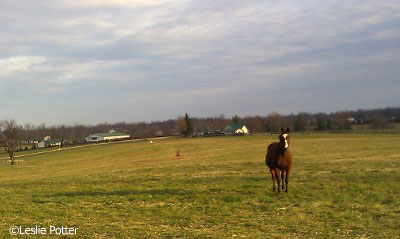 A Thoroughbred mare poses in the central Kentucky scenery as I use her as an excuse to take a break from my run.

When you’ve been out for several miles and still have several to go, it’s easy to get cranky, but when you have beautiful horse farms to gaze at, you can start to forget about your tired legs and burning lungs for a bit. Sometimes the horses get curious enough to interrupt their grazing and step up to the fence to see what’s going on. Since most of them are Thoroughbred broodmares, some with past racing careers of their own, I imagine they’re doing some sort of silent equine pointing and laughing, thinking, “you call that running?” as I clumsily jog past. 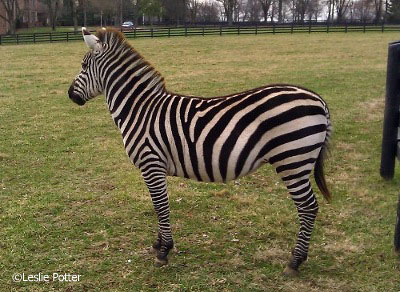 Yep. That’s a zebra. He lives on a farm with some ponies, a herd of bison, at least one camel and a few other assorted species. He was friendly on the day that I stopped by. In fact, he was quite a ways away when we stopped to gaze at him, and came wandering over when one of my running companions called to him: “Hey, Zebra! Come here, Zebra!” 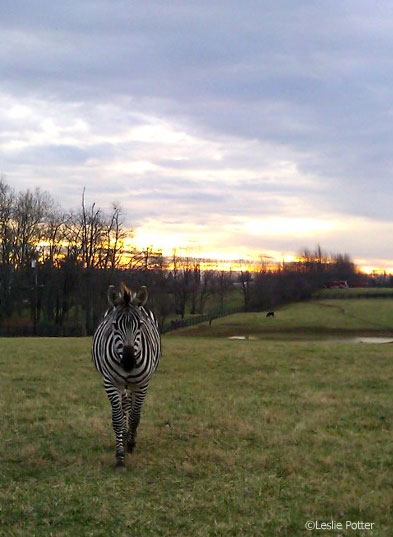 He’s small, but to be honest I don’t really know how big a full-grown zebra is. He came over with his teeth bared, but since he then turned to let everyone scratch his back, I think it was more like the snapping gesture that young horses make as a sign of submission than a display of aggression. His teeth looked small, like a young horse’s, but again, I don’t know how horse and zebra dentition compare. He had a pretty good winter coat that felt coarser than the fluffy fur of your standard equus caballus in December.

A zebra is a strange sight in Kentucky, but I think he adds to the scenery. I certainly didn’t mind having an unusual mid-run distraction.