Home Equestrian Lifestyle Who said that? Probably not Winston Churchill 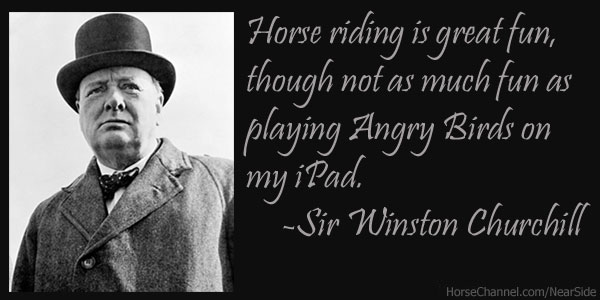 Don’t believe everything you read.
There are a handful of inspiring quotes that circulate around the equestrian community on bumper stickers, T-shirts and Facebook posts. Surely you’ve heard many of them. How about, “The wind of heaven is that which blows between a horse’s ears.” Or, “God forbid that I should go to any Heaven in which there are no horses.” Or my favorite: “A canter is a cure for every evil.”

There are lots of quotable sayings that remind us how noble our steeds are. But there’s one that’s always bothered me.

“There’s something about the outside of a horse that is good for the inside of a man.”

I get what they’re going for, I think, but isn’t that an awkward way to put it? Horses are good for our souls, sure. But is it the outside part that’s so good for us? Is it my horse’s fuzzy winter coat that brightens me up after a long day in the office, or is it his quiet personality, his spirit, his soul, if you will. Whatever it is that makes a horse a horse is probably not really the outside of him, at least not just the outside. Plus, if you think about it too long (and clearly I have), you’ll realize the literal meaning would be that consuming horse skin is good for your guts. And that’s not right.

I suppose using inside and outside in that sentence was a rhetorical device and perhaps not meant to be taken so literally, but if whoever said it had thought about it for a minute, I think they would have come around to my way of thinking on it.

Who did say it, anyway? The most common attribution I see is to Winston Churchill, but I’ve always had my doubts about that. Part of it is probably that the attribution is inconsistent. Sometimes Ronald Reagan is given credit (or blame, if you share my perspective) for it. Sometimes others.

Churchill is also credited with another oft-repeated horse quote: “No hour of life is lost that is spent in the saddle.” I can’t really argue with that one, but again, did it really come from Winston Churchill?

I contacted the National Churchill Museum in Fulton, Missouri on the off-chance that they’d be able to shed some light on this mystery. And shed some light they did! As it turns out, the latter quote is, in fact, Churchill’s. It was published in his 1930 memoir, My Early Years. I think Churchill’s been shortchanged by having the passage cut down to just that one sentence, though. After reminiscing about the fun he had riding with friends as a youngster, he writes:

And here I say to parents, especially to wealthy parents, ‘Don’t give your son money. As far as you can afford it, give him horses.’ No one ever came to grief except honourable grief through riding horses. No hour of life is lost that is spent in the saddle. Young men have often been ruined through owning horses, or through backing horses, but never through riding them unless of course they break their necks, which, taken at a gallop, is a very good death to die.

So what about the outside of a horse/inside of a man quote? Not Churchill, they told me.

According to They Never Said It, a 1989 compilation of misquotes, the statement was, indeed made by Ronald Reagan in 1987 as he headed to his California ranch for the holidays. However, he wasn’t the first. Dr. Cary Grayson, Woodrow Wilson’s physician, had previously made the remark. Before him, the 19th-century British statesman Lord Palmerston supposedly made this odd declaration as well. Was he the first? It’s hard to say for sure, but it does show up in the 1906 book Social Silhouettes by British biographer and politician George William Erskine Russell.

To pass from the Invalid to the Squire is to enjoy the pleasure of swift and sudden contrast. The Squire is never ill. Nay, more—the mere suggestion of illness or delicacy in another rouses all his manly scorn. “That fellow Millikin is always seedy—but what can you expect? He eats four meals a day, takes no exercise, and is always drugging himself. If he would eat about half what he does, chuck his physic-bottles away, and hunt three days a week, he would be perfectly fit. I told him so the other day, straight,” —and you may risk a bet that the Squire will wind up his terse allocution with an apocryphal saying which he attributes to Lord Palmerston—”There’s nothing so good for the inside of a man as the outside of a horse.”

The “hunt” that the Squire refers to would be a fox hunt, and based on my single foxhunting experience, I would say that it is pretty intense exercise. So if this is, indeed, the origin of the quote, the suggestion is simply that galloping horses across the open country is good for your physical health. I can’t argue with that. I guess I can tone down my hostility toward that saying, but you still won’t see me stitching it into a sampler to hang in my tack room. It’s not THAT good.

Edited to add: I’ve been trying to see if the Lord Palmerston attribution can be substantiated, and while I have not succeeded, I did find the following passage in his biography, published in 1879, which suggests that the horse quote is something ol’ Palmy would say.

His groom relates that often in his early days the horses were kept waiting at the door of the Foreign Office up to ten or eleven o’clock at night, so that, at any rate, Lord Palmerston might ride home, and so observe his rule of daily exercise on horseback. He was fond of saying that ‘Every other abstinence will not make up for abstinence from exercise.’

What horse quotes do you love or hate? Click “Submit a Comment” below and let me know. Maybe we can track down some more origins.

Featured Video: The Friendship Between a Steer and a Stallion