In our current video of the week, we featured a viral hit showing some behind-the-scenes footage from the Budweiser commercial sets featuring the legendary Clydesdales. The dashing drafts will again make an appearance during this year’s Super Bowl, which is good news, in my opinion.

It’s interesting that the Clydesdales have been so tenacious as mascots for a beer brand. I’m not sure that seeing the noble beasts really inspires people to crack open a cold one. In fact, if there was ever a logical horse/beer advertising partnership, it would be Zenyatta and Guinness, since the popular Irish potion was said to be a regular part of her diet.

Obviously, I’m not complaining. I love the Clydesdale ads. This year, not only are we getting a new equine ad, but Budweiser has just entered the Twitterverse to ask fans to help name the newest Clydesdale foal. 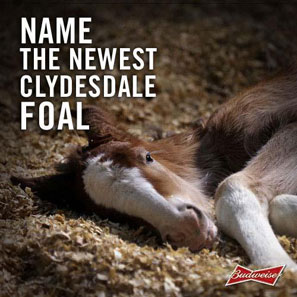 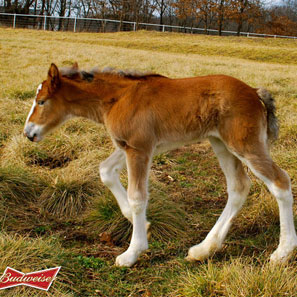 The most popular name currently appears to be Stan in honor of Stanley Musial, legendary St. Louis Cardinal who recently passed away. Since Budweiser is a St. Louis-based company, it makes sense. I think I’d go with “Archie” in honor of the city’s iconic arch. Too predictable? Then I guess I’ll keep Clyde to myself.

Another Twitter suggestion was Moonshine in honor of the repeal of prohibition. That happened a solid lifetime ago, but it was featured in the 2012 Super Bowl ad, so maybe it would resonate with the PR folks over there at Budweiser.

Professor Fuzzyfeet seems to be gaining some momentum. Okay, not really, but I’m hoping I can start a Twitter campaign to make it happen.

If you have a Twitter account, you can head over there and make your voice heard using hashtag #Clydesdales. Just remember #ProfessorFuzzyfeet.

If you don’t have a Twitter account, please enjoy past Clydesdale Super Bowl ads here, here, here, and here.

How to Make a Horsey Holiday Garland