Last weekend was the famous London Marathon, which went off without a hitch under the long shadow cast by the attack on last Monday’s Boston Marathon. After the emotional week in Massachusetts, it was a bit of a relief to see some positivity come out of London.

At any road race, you’ll have the serious runners who are out there to win. As you move toward the middle and back of the pack, you’ll find the charity runners who aren’t out to clock an impressive finish, but rather to raise funds for a particular cause. You’ll also find the costumed runners, which sometimes dress up to match a race’s theme and can get pretty creative.

In London this year, volunteer police officer Nic Van Gelder fit into both of those back-of-the-pack categories, wearing a costume to raise awareness and funding for the Society for the Protection of Animals Abroad (SPANA.) But this wasn’t any old costume. Van Gelder covered his 26.2 miles wearing SPANA’s 35-pound donkey mascot costume. 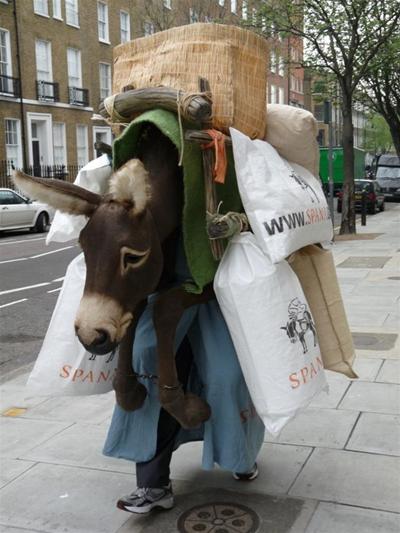 SPANA is dedicated to helping working animals in third-world nations. Donkeys, mules and other equines are essential to many people’s livelihoods in impoverished regions, but unfortunately, there often isn’t adequate veterinary or farrier care for those working animals. SPANA and other groups offer free veterinary care and help to educate owners about how they can keep their animals sound and healthy.

Van Gelder’s overburdened trudge down the marathon course is symbolic of the kind of life led by many working equines. He’s not the first person to represent SPANA in this manner. According to his fundraising page, Chief Executive Jeremy Hulme and Veterinary Director Andy Stringer have taken the 26.2-mile challenge in the past.

The marathon is over, but it’s not too late to donate to support working equines (and intrepid marathon runners). To find out more, head over to Van Gelder’s fundraising page where you’ll also be able to see more photos of the impressive costume.

By the way, he finished the course in 6 hours and 48 minutes. Not exactly a land speed record, but in my humble opinion, anyone who can carry a 35 lb load for 26 miles at any speed is deserving of accolades. Props to you and your donkey costume, Mr. Van Gelder. 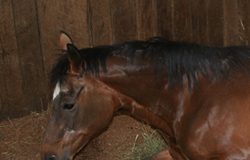