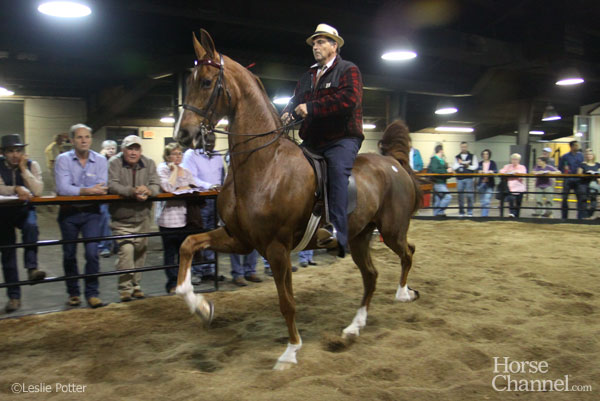 A seller rides an American Saddlebred through the semi-annual sale at the Tattersalls auction pavilion in Lexington in 2011. The property was sold to developers later that year and is now the site of off-campus student housing.

When I first moved to Lexington, one of the many local horse events I was excited to attend was the semi-annual Saddlebred auction at the Tattersalls sales pavilion. These sales were sort of the flea market of the American Saddlebred industry. There would always be a handful of big price tags for high-profile performance horses, but the real treasures were the diamonds in the rough. A buyer with a good eye for a horse could look through those lots and find a future superstar for a bargain basement price.

Of course, when I attended, I wasn’t a buyer, and I wouldn’t say I have a good eye. I mean, really, a horse could walk into the pavilion with its legs on backwards and I’d still pick it as my favorite if it happened to be dappled gray with an expressive eye. But I did always like to go for the spectacle. It was fun to window shop and imagine what any of those horses could go on to be.

Now if I visit the site of the Tattersalls auctions, I’ll find newly constructed off-campus housing for University of Kentucky students. These are apartments intended for a young and transient population to crash for a few years before moving on with their lives. Yes, that’s a curmudgeonly way to describe University students and no, I don’t blame them for the development. The sale would have shut down anyway when its longtime operators decided to retire and the pavilion itself, charmingly gritty with age, was existing on borrowed time. Still, change is hard to accept. Once an equine property is converted into something else, it will probably never go back.

Several years ago, I was spending a summer day killing time by driving around with a friend (gas was cheaper then.) We decided we’d try to find the farm where we had gone to summer horse camp many years earlier. I remembered the name of the road it was on and we looked it up on a map (this was pre-GPS) and found our way there. The old house on the property was still standing, but the barn was partially torn down and the pasture fencing appeared to be gone. We got out of the car next to where the riding arena had once been and stared at the property, trying to fill in the blanks in the landscape with our memories of what used to be there.

It was pretty surreal, but maybe not as weird as what has become of the show venue where many of my college riding victories (and defeats) took place.

When I was in college, the Midway Expo Center in Columbia, Missouri was the site of dozens of horse shows of all types. It’s where I won my first blue ribbon ever. In fact, it’s the first place I ever showed Snoopy, before he officially owned me. Midway still exists, although as far as I can tell the only equine events it hosts now are rodeos. I found out about Midway’s fate when a college friend told me she’d just seen it featured on a reality show called Truck Stop USA. We watched a couple of episodes out of morbid curiosity. The show has a contrived sense of zaniness and the distinct feeling of being heavily staged. I guess it’s what you’d expect.

Midway was never a charming location. I mean, it is a truck stop with a show venue. And props to its current owners for finding a way to keep it viable and relevant the best way anyone can in the 21st century: a cable TV reality show. But it’s still sad to think that the stalls where we hung the University’s drapes and the arena where I took my first victory pass might never see a horse show again.

Things change, and that’s OK, but I also think it’s OK to be a little wistful about the loss of the places that make up our equestrian heritage. So commiserate with me. Have any of the places you once rode become strip malls or subdivisions? Has your favorite trail or show venue been closed to horses? Tell your story in the comments section below.