June is my favorite time of year, and that is in no small part due to the daylight that stretches well into the evening. Here in the Horse Capital of the World, we’re pretty far west in the Eastern time zone, which makes our sunsets artificially later. Today, the day of the summer solstice, our sunset is officially at 9:03 p.m. Blissful.

I’ve been pretty busy this week, and while I’d had every intention of riding yesterday, I sort of nixed my plans when I finally rolled into the barn around 8:00 p.m. When I went to bring Snoopy in for his evening snack, I looked around and noticed that everything seemed perfect. The temperature was warm, but not too hot. The waning evening light cast everything in a golden glow. It even smelled nice out there. Not just in that I-love-the-smell-of-horses way, but actually good, like some tropical flower had started blooming upwind (in hindsight, it was probably someone’s botanical fly spray, but the effect was the same.) 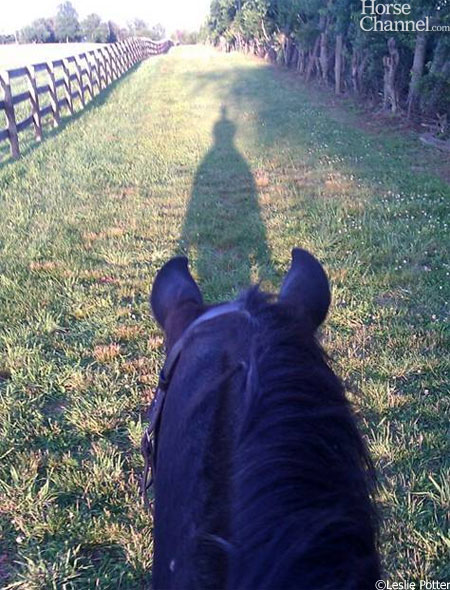 We took a walk around the path that follows the perimeter of the farm with our shadows stretched out ahead of us. We passed by the mares and foals that Snoopy likes to visit at the neighboring farm. We caught the attention of some of the horses in the paddocks adjacent to the path, but Snoopy obediently trucked along, even though I’m sure he would have liked to stop and sniff noses (and then, invariably, squeal and stomp as if the other horse has done something offensive.)

We’ve had quite a bit of rain this week, so the sometimes-present puddle in a ditch at the front of the property was almost pond-sized. I used the opportunity to have a short water-crossing schooling session, which is not Snoopy’s favorite thing. Nevertheless, he only hesitated once and then stomped right through the middle where it was surprisingly deep. Good boy!

The sun had gone below the horizon by the time we made the final turn toward home, and in the shadows I could see that our path was blocked. There were quite a few limbs and even some entire trees down after the storms earlier in the week, and this one happened to be right across the trail. I stopped Snoopy quite a ways back from the downed limb, but he was insistent, so I let him walk up to it. He stopped a couple of feet away.

“What’s your plan, here, buddy? Are you going to jump it?” I asked.

He briefly considered this—or at least I like to think he did—then sighed and turned around and went back the way we came.

The surprise addition to our ride meant we got another shot at the mini-river, which Snoopy tackled again with an enthusiastic trot. By the time we got back within sight of the barn it was starting to get dark and the fireflies were out, and personally, I think that’s the best way to end a June evening ride.