Home Equestrian Lifestyle The Near Side: Riding the Mangalarga Marchador

A few weeks ago, I shared some photos from my trip to Brazil where I was introduced to the Mangalarga Marchador breed. While I was there, I also had several opportunities to ride some of these horses.

The first farm we visited was an oasis outside the city of Belo Horizonte called Haras Portal do Marchador. After seeing some of the mares and young foals, we arrived at the main barn for the competition horses where we were introduced to some of the past, present and future champions of the breed. After watching the farm’s riders work a few of the horses, they asked if I would like to ride.

Well, there’s only ever one correct answer to that question, isn’t there? 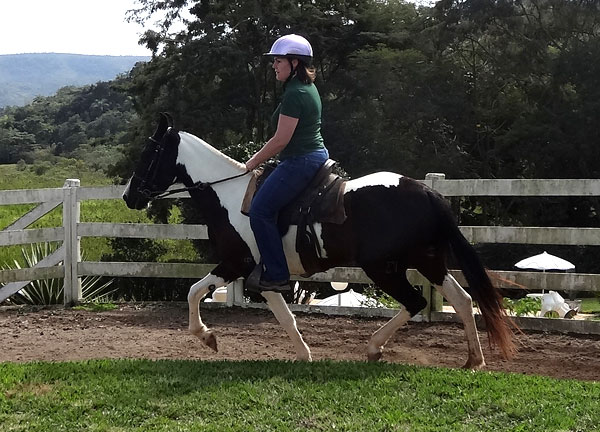 Gostosa the Energizer Bunny was tasked with giving me my first Mangalarga Marchador experience.

The first horse I rode at Haras Portal was a pretty pinto mare named Gostosa. With a bit of basic instruction, I was set free in the arena and Gostosa gamely walked off. A little squeeze with my lower legs, and she set into the Mangalar’s signature marcha. The strides are relaxed and ground-covering, so not really anything like the quick step of a Paso Fino or the controlled power of a Saddlebred’s rack. But it was easy to sit and comfortable to ride. I really felt like I could ride like that all day. After a few laps around the arena, I squeezed the reins and sat deep to bring Gostosa back to a walk. Nothing happened. Maybe I would be riding like that all day.

I squeezed the reins a little more. She slowed her gait, but kept on dutifully trucking along. Perhaps there was some foreign cue I was missing.

“How do I stop?” I asked the small crowd assembled in the center of the ring.

Fair enough. Gostosa continued along at her comfortable, collected gait for another minute or two until I imagine she realized she had a newbie on her back and slowed to a walk. I walked her around a couple more laps, then brought her into the middle and stopped. I don’t think I wowed anyone with my first Mangalarga riding demonstration, but they still let me ride three more horses that day!

All three of those other horses were happy to respond to my normal “whoa” cue, by the way, so I guess there’s no language barrier there. Miss Gostosa must have just been feeling good.

The following day, we visited Haras Morado Nova, a historic estate that was almost too beautiful to be real. Because the national show for Mangalarga Marchadores was just weeks away, we were able to see some of the contenders being worked in the arena. What could be better than watching national champions at work? Riding them, of course. 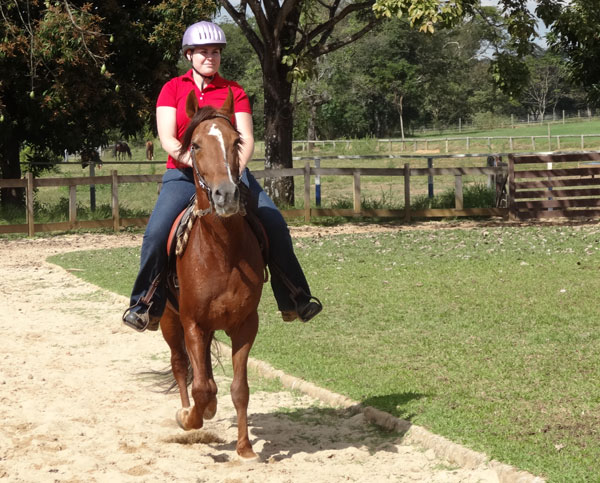 The lovely Pais, who did not fit in my suitcase. Not that I tried or anything…

They brought out Pais, a stunning chestnut stallion with a resume that includes national championship and reserve championship titles. I was immediately in love. Besides his good looks, his gaits were silky smooth and he handled like a sports car, but with the mellow attitude of a horse who has been there and done that. I started thinking of ways to smuggle him out of the country with me.

My final riding experience was at Haras El Far, a farm set on the steep mountainsides outside the town of Lavras. At this farm, instead of just riding in the ring, we had a cavalgada, or what we Americans would simply call a group trail ride. I was paired up with a friendly gray mare named Begonia. 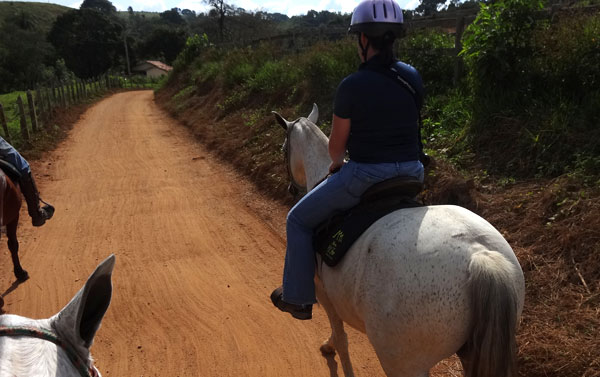 Begonia and I embark on our journey to the mountaintop: an adventure for me, but just another day in the life for Begonia.

When I say this farm was set on a steep mountainside, I’m being quite literal. After taking some winding roads, we faced some intense hills unlike anything we have here in Kentucky. At one point, we headed toward an incline that I’m pretty sure my own horse would view as a vertical wall, but this terrain is home to the Mangalargas, and they did not hesitate.

I leaned forward a bit and moved in to a sort of half seat as we scaled the incline. I noticed that everyone else in this cavalgada was staying comfortably seated in their Australian-type saddles, and their horses seemed to be doing just fine, picking their way along the mountain. Begonia was breathing pretty hard by the time we reached the top, but she recovered quickly as we stopped to take in the view. The pastures the horses at this farm lived in were just about as hilly as the trail, so other than the added weight of me on her back, I suppose this wouldn’t seem like a big deal to Begonia. 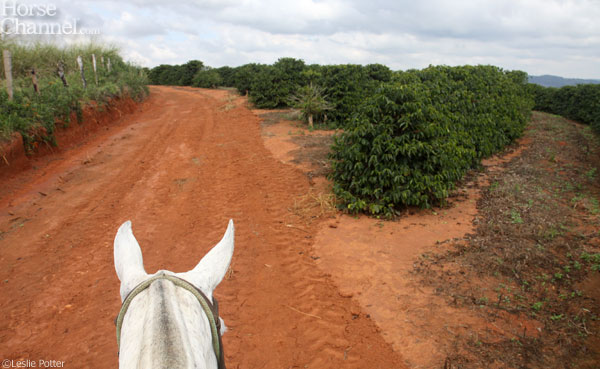 And on the right, you see the plants that give us one of the earth’s most precious gifts to humankind: coffee.

The thing that was most striking to me was that while the horses calmly made their way across whatever terrain we pointed them at, they weren’t like dead-head trail string horses. Toward the end of the ride, I steered Begonia away from the group to take a closer look at the swimming track the farm had built to help condition the horses (as an aside, how cool is that?) She didn’t hesitate or balk or insist to be with the group. She simply said, “Yeah, okay. Let me show you the pool!”

After this trip, I can count myself as a fan of the Mangalarga Marchador. I’m no star rider, but most the horses I rode in Brazil–many of them young, top show horses–took care of me the way you might expect from an old trail pro. And I have to point out the generosity of the farm owners and managers who made this experience possible. How many farms could you visit in the U.S. where the owners would say, “Hello, total stranger. Would you like to ride our four-year-old champion stallion?” (Note: If you are the owner of a champion horse and you would like to prove me wrong on this, drop me a line anytime!)

Mangalargas are pretty rare in the U.S., and due to quarantine regulations, importing them from Brazil is a challenge. However, there are a few breeders here in North America. You can find out more from the US Mangalarga Marchador Association at www.namarchador.org.