Home Equestrian Lifestyle The Near Side: Rider Versatility at the Alltech National Horse Show 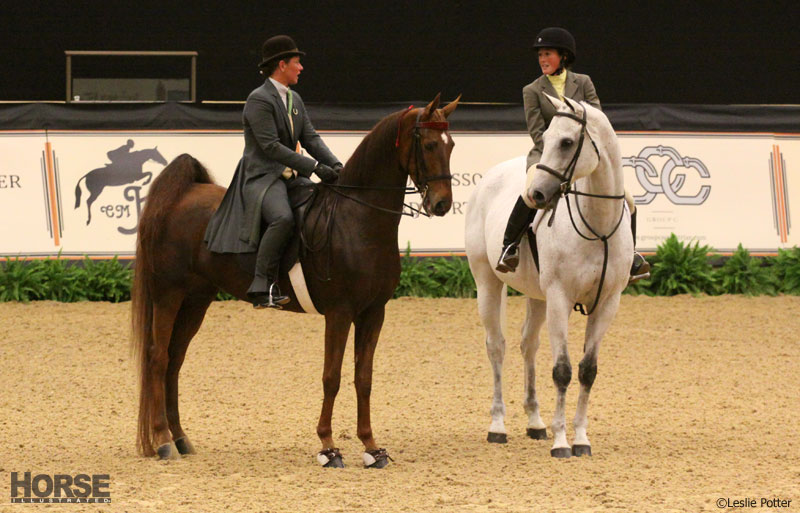 “Can’t we all just be friends?” Hunter trainer Jennifer Alfano (left) on The Blue’s Girl and Saddlebred trainer Stephanie Sedlacko on Special Edition chat just before being announced winners of the first Multi-Breed Challenge at the 2013 Alltech National Horse Show.
A while ago, I had a conversation with some friends about the relative difficulty of different disciplines. They were of the mind that if you can ride saddle seat, you can ride any discipline. My riding instructor in high school used to say the same thing, and I can kind of see why you might think that. The saddles are flat, so it’s up to you to keep yourself in the right place. You’ve got to manage two sets of reins. The horses tend to be pretty high-powered.

But overall, I disagreed with my friends. I spent half my life riding saddle seat, and not to toot my own horn, I think I was pretty good at it. I’m not the prettiest rider, but I felt comfortable riding saddle seat, even when riding a hot Saddlebred through five gaits. It’s been a couple of years since I last sat in a cutback saddle, but even now I think I’d feel pretty confident seated on a flat saddle aboard a high-stepping horse with a big “go” button. It feels natural to me.

But navigating a dressage test? I try, I really do, but I have trouble getting it. And when I read or hear an expert in the discipline explain what are supposed to be basic concepts, I just get more confused. Not to mention that when I took a semester of dressage during my sophomore year of college, it took me quite a few rides to get used to the feeling of all that saddle around me. For some riders, a dressage saddle feels more secure, but after having ridden saddle seat for so long it just seemed constricting. I felt like I couldn’t sit where I needed to.

And jumping? Don’t get me started. I also had a hunt seat semester in college, and at the end of it I felt okay about jumping. But when I started taking lessons in the discipline again a few years ago, it was like I’d never ridden before. I still can’t see a distance most of the time and I’m pretty sure I look like a drunk monkey over every fence. Yeah, I can ride a hot horse with two reins and a flat saddle, but frankly, I haven’t found that to translate perfectly to other disciplines.

But enough about me.

Last night, I went to Saddlebred night at the Alltech National Horse Show where one of the featured events was the Multi-Breed Challenge in which four professional hunter and jumper riders paired up with four Saddlebred trainers for a fun competition. The Saddlebred riders would ride a 2’6″ hunter course, then the hunter/jumper riders would compete in a five-gaited class. As a spectator with an interest in both of those disciplines, I have to say, it was fantastic.

Here are some photos from the competition, along with a look at some of the competitors as they’re more typically seen, for comparison. 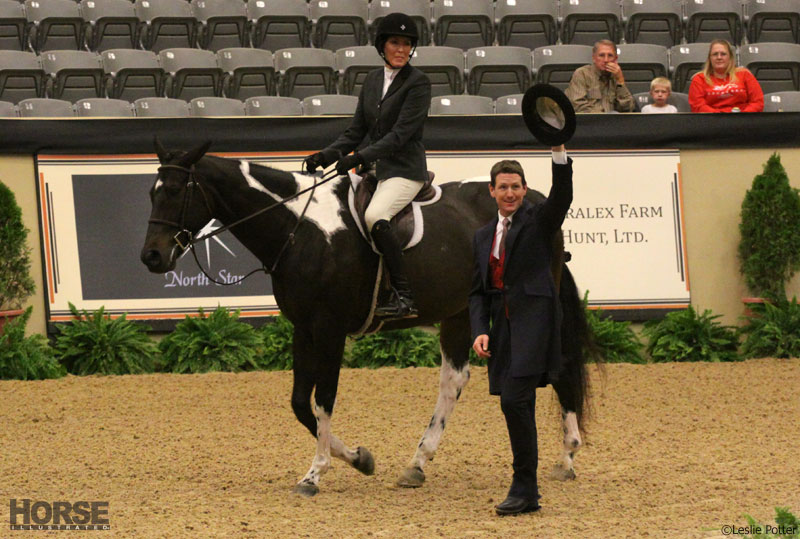 Olympic show jumper McLain Ward looks dapper in his saddle suit as Saddlebred trainer Melinda Moore rides Echo into the ring before the challenge. Moore had fun jumping, and even started leasing Echo so she can keep practicing! 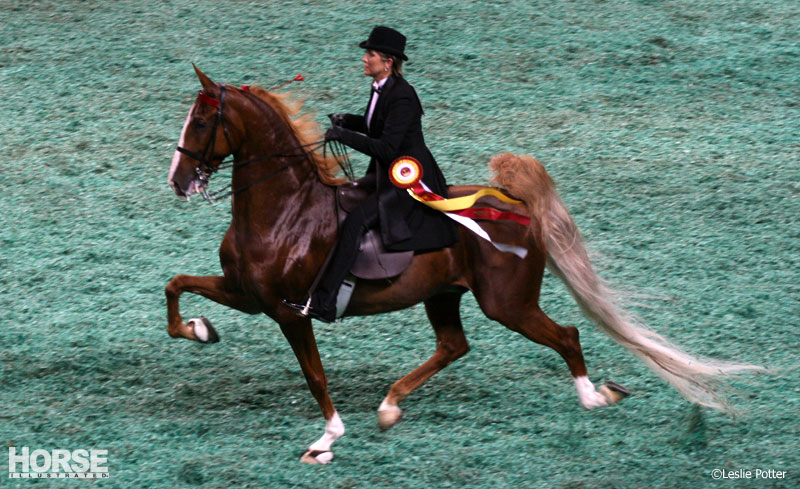 Here’s Melinda Moore on her home turf, piloting Attache’s Royal Crown to a Reserve World Championship in the open five-gaited division in 2009. 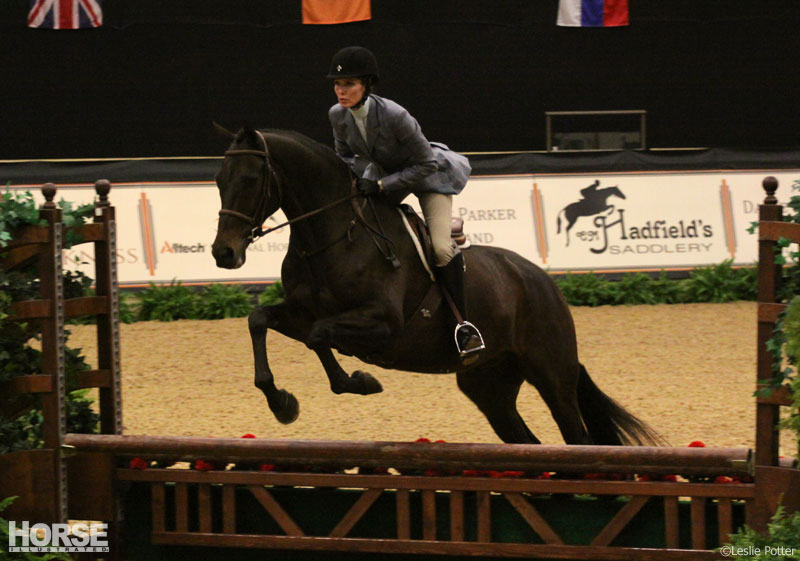 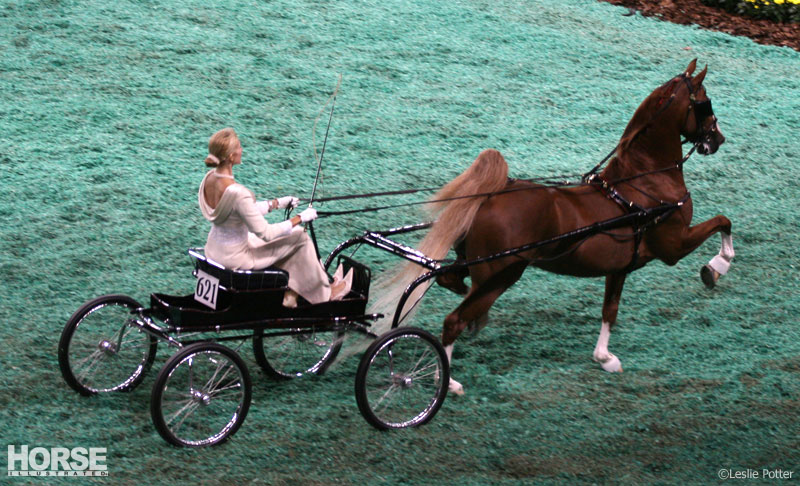 The American Saddlebred Fine Harness division is a far cry from the 2’6″ hunters, but Melissa Moore (shown here in 2009 with Gothic Revival) seems to do pretty well in either spot. 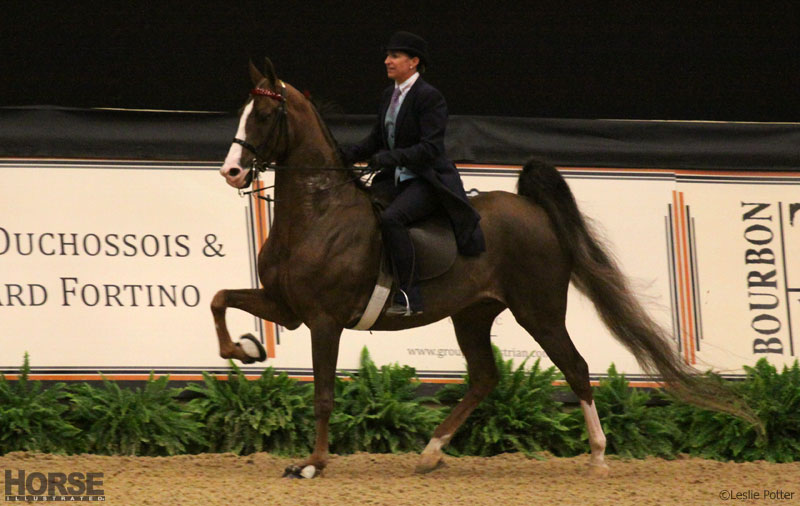 Olympic and World Equestrian Games veteran Laura Kraut reportedly did not have a chance to practice her saddle seat riding before the challenge. But she was a natural, earning the highest score in the Saddlebred class aboard Don’t Stop. 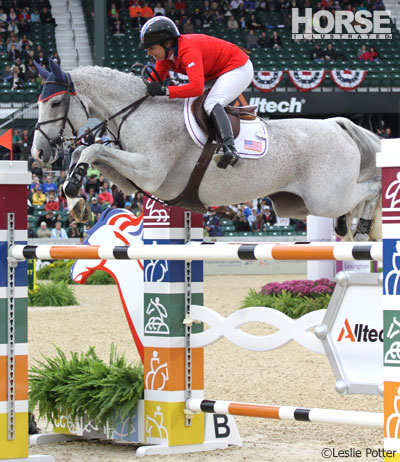 Kraut, shown here with the wonderful Cedric in 2010, has proven herself a versatile rider. Maybe she’ll add a Saddlebred to her barn next. 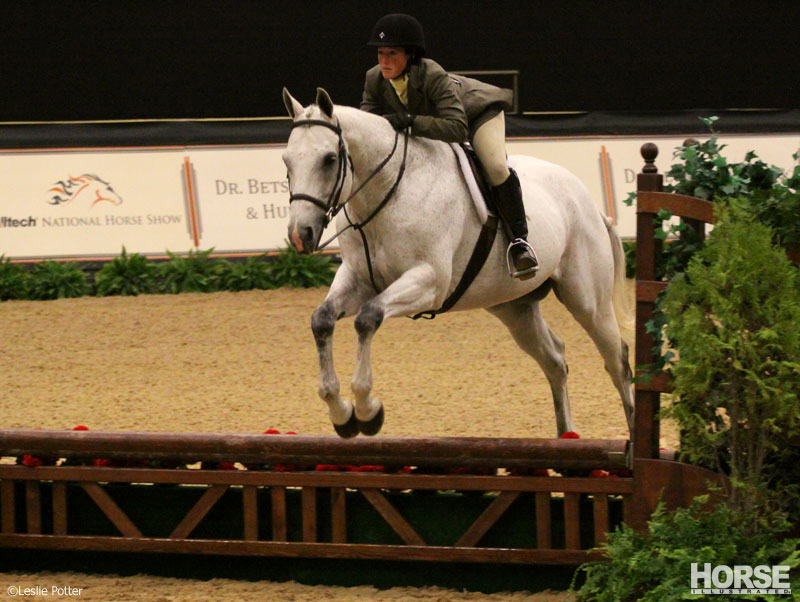 Stephanie Sedlacko has trained American Saddlebreds exclusively for the past decade, but had some hunter experience in the past. This was evident as she rode a solid course on her way to winning the breed challenge with teammate Jennifer Alfano. 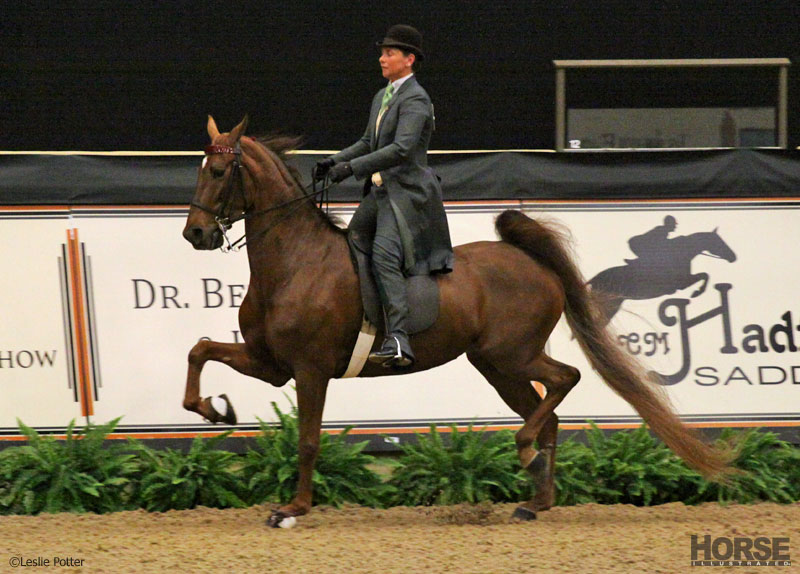 Alfano, perhaps best known for her success in the hunter derbies with 2012 USEF National Horse of the Year Jersey Boy, had some experience with Saddlebreds when she competed in a similar challenge class at the Devon Horse Show this summer.