During the winter, I occasionally take my dog, Brit, over to a nearby park that has a fenced-in baseball field where she can run around. It’s not quite as good as the dog park, but when daylight hours are scarce, it’s an adequate replacement and is a little more fun than the same old on-leash walk around the neighborhood.

The other day, we arrived as the sun was setting, and after turning Brit loose and shutting the gate behind us, I turned and looked at her silhouette over on the other side of the field. I was just starting to think how the low evening sunlight was creating the illusion that she was on the other side of the fence when she suddenly took off running, and went beyond the perimeter of the field. My heart dropped into my stomach. The other gate had appeared to be closed, but I was looking into the sun when I had glanced at it earlier, and completely missed the fact that it was slightly ajar.

I called Brit and she either didn’t hear me or didn’t care. I followed her path and found her chowing down on something disgusting (I don’t even want to know) by the train tracks on the far side of the park. She turned and headed toward the tracks as I approached, but when I issued the command, “Brit, come!” she trotted back over to me. I grabbed her collar and lavished excessive praise on her and eventually my heart emerged from my gut and started beating again.

It was a stupid mistake and one I’m not likely to make again anytime soon. In the few minutes she was loose, heading toward the train tracks that would lead her to busy streets downtown, every horrible runaway dog scenario went tearing through my head. I’m lucky that I’d decided to ramp up our obedience training over the past few months. She’s still not 100% reliable on the recall, clearly, but if we hadn’t been practicing it so much recently, I don’t think she would have responded as well as she ultimately did.

I’m also lucky that she was distracted by something smelly and disgusting in the overgrowth by the tracks. Who knows if I ever would have caught up with her otherwise.

Afterwards, I was thinking how that heart-in-the-stomach feeling felt familiar, but I wasn’t sure why. Then I remembered a time when I did the exact same thing, but with a horse.

As part of my Equestrian Science degree, I had one semester where I was in charge of the day-to-day care of eight of the university’s school horses. A very fancy hunter named Paris entered my string about a month into the semester. The rumor around the barns was that he’d been on the A-circuit and was valued at something like $100,000. Perhaps more importantly, at least from my perspective as his caretaker, he had a friendly and curious but laid-back temperament that made him nice to work around.

He’d only been in my care a week or two when it happened. I was taking him for his daily turnout in the outdoor arena, and as I closed the gate behind me, I noticed he was walking off rather purposefully. I followed his trajectory and sure enough, the other gate was open. I can’t even claim that the sun was in my eyes that day. I just didn’t look. I started to run toward the other gate, which only prompted Paris to break into an easy jog—a gait faster than my fastest sprint—and out through the other gate. He reached the edge of the equestrian complex where he could have turned left toward the relative quiet of campus. Instead, he turned right toward one of the main roads through town and continued on at his happy little jog right into traffic.

After a short, low-speed chase (which was probably hilarious to the locals who, mercifully, slowed down at the sight of a horse and frantic college student in the road) my savior arrived in the form of a fellow Equestrian Science student who happened to be driving by. She used her truck to slowly herd Paris to a side street, and then over to the side of the road where he stopped and patiently allowed himself to be caught. Who knows where he would have gone if no one had stopped him? 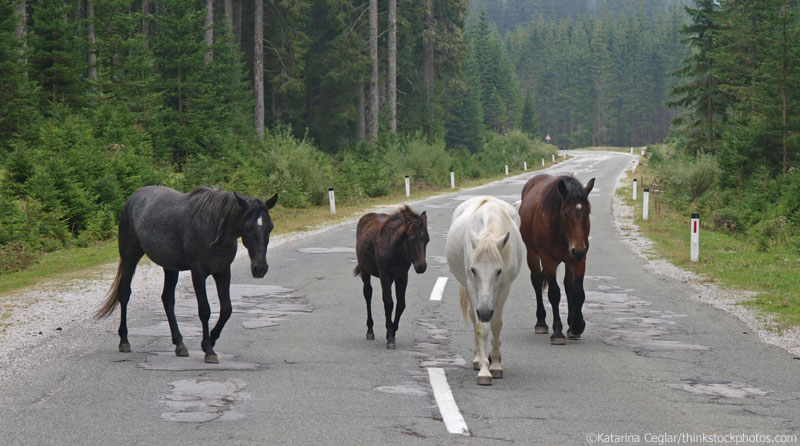 I can only imagine that Paris (not pictured) would have wandered off into the wilderness and started his own band of feral warmbloods and hunter ponies.

Things could have been so much worse. I made a really stupid mistake that could have ended with injury or worse to the horse or a driver. I was lucky that Paris was such an easy-going guy, and really lucky that a resourceful classmate was in the right place at the right time. Yeah, it was stupid, but I learned from it. You’d better believe that I never made that mistake again.

Well, until the other day, with the dog. Maybe I’m just a little slow and need to re-learn this lesson every decade or so.

You can make me feel better about my screw-ups by sharing your horsekeeping mistakes and what you learned from them over in this month’s Rider Insider. Our favorite response will even score a prize from Noble Outfitters. Meanwhile, I’ll be hard at work with Brit, getting that reliable recall down pat.

Photo Tips: The Horse at Liberty